Find the Coaching in Criticism. Feedback is crucial. 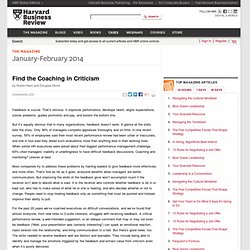 That’s obvious: It improves performance, develops talent, aligns expectations, solves problems, guides promotion and pay, and boosts the bottom line. But it’s equally obvious that in many organizations, feedback doesn’t work. A glance at the stats tells the story: Only 36% of managers complete appraisals thoroughly and on time. In one recent survey, 55% of employees said their most recent performance review had been unfair or inaccurate, and one in four said they dread such evaluations more than anything else in their working lives. When senior HR executives were asked about their biggest performance management challenge, 63% cited managers’ inability or unwillingness to have difficult feedback discussions. Most companies try to address these problems by training leaders to give feedback more effectively and more often. Why Feedback Doesn’t Register What makes receiving feedback so hard? 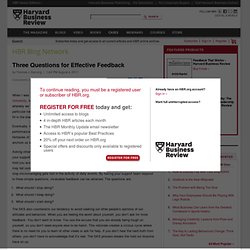 DeLong | 1:43 PM August 4, 2011 When I was in graduate school, Phil Daniels, then a psychology professor at Brigham Young University, taught us about a feedback mechanism he called the SKS form. It was simply a process whereby we would ask others what we should stop (S), keep (K), and start (S) doing, given a particular role we might have as a teacher, friend, spouse, father, mother, etc. People are asked to fill in the blanks, limiting their entries to no more than three bullet points under each subhead. Eventually, I introduced the SKS process into faculty evaluations at universities, as well as performance appraisals on Wall Street. Asking others for feedback using SKS can be important to professional growth.

What should I stop doing? How to Avoid Becoming a Person You Hate - Peter Bregman. I was so angry my whole body was shaking. 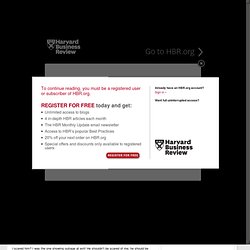 I stared at Günther* with hate, my left hand in a fist and my right hand gripping a tennis racket as a weapon. I was ready to kill him. Was this really me? The Manager's New Role - Vineet Nayar. By Vineet Nayar | 12:14 PM August 8, 2011 “My children don’t seem to need me anymore,” a friend complained to me the other day. 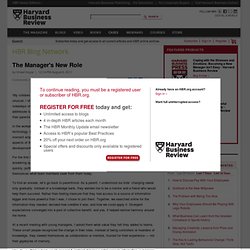 That isn’t unusual; I often hear parents express their concerns about how little their children learn from them nowadays or ask them questions. From finding the meaning of words and searching for street addresses to understanding how things work, children are increasingly turning to the net instead of their parents. In the workplace, a similar transition is taking place with the widespread adoption of information technology. Managers are increasingly taking a back seat as information providers.

The Nasty Truth about CEO Pay - Roger Martin. By Roger Martin | 9:19 AM June 3, 2011 Every spring, the Wall Street Journal publishes a CEO Salary Report, using a Hay Group survey to break down compensation levels for the CEOs of the 350 biggest publicly traded US companies. 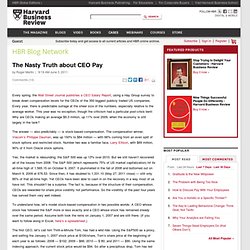 Every year, there is predictable outrage at the sheer size of the numbers, especially relative to the average worker. This year was no exception, though the criticism had a particular post-crisis bent: Why are CEOs making an average $9.3 million, up 11% over 2009, when the economy is still largely in the tank? Money And The Meaning Of Life. If You're An Average Worker, You're Going Straight To The Bottom. La fin du travail tel que nous le connaissons. Lack of Diversity Paralyzed the CIA. It Can Cripple Your Organization, Too. Nine Things Successful People Do Differently - Heidi Grant Halvorson. Learn more about the science of success with Heidi Grant Halvorson’s HBR Single, based on this blog post. 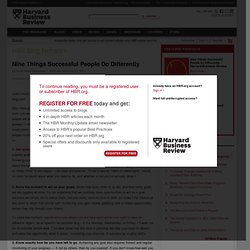 Why have you been so successful in reaching some of your goals, but not others? If you aren’t sure, you are far from alone in your confusion. It turns out that even brilliant, highly accomplished people are pretty lousy when it comes to understanding why they succeed or fail. The intuitive answer — that you are born predisposed to certain talents and lacking in others — is really just one small piece of the puzzle. You Are (Probably) Wrong About You - Heidi Grant Halvorson. By Heidi Grant Halvorson | 9:00 AM July 30, 2012. 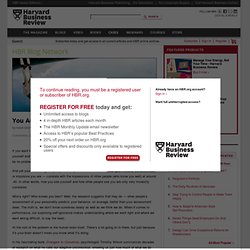 Search results for building - OpenClipArt. Start with Geostrategy, or call it Tactics « Silberzahn & Jones. Many business people seem to operate under the unconscious assumption that they’ll gain a competitive advantage through a careful daily reading of the business press. 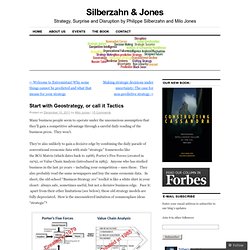 They won’t. They’re also unlikely to gain a decisive edge by combining the daily parade of conventional economic data with stale “strategic” frameworks like the BCG Matrix (which dates back to 1968), Porter’s Five Forces (created in 1979), or Value Chain Analysis (introduced in 1985). Anyone who has studied business in the last 30 years – including your competition – uses these. They also probably read the same newspapers and buy the same economic data.