Adorable Portraits of Puppies Enjoying a Good Shake. Koda Vincent For dogs, shaking off can a calming activity, one that relaxes the muscles while getting rid of pesky moisture, bugs, or even negative emotions. 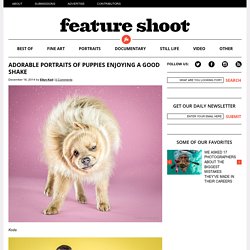 For Portland-based photographer Carli Davidson, dogs provide a similar sense of restoration and healing. In the sometimes painful world we live in, our furry friends are always there to remind us of what’s so beautiful, silly, and joyous about life. On the heels of her viral hit SHAKE, in which she captured dogs in the midst of a particularly satisfying shimmy, Davidson presents her new book SHAKE Puppies. The concept for SHAKE Puppies came about, Davidson explains, when she introduced SHAKE to her friend’s second-grade students, who immediately suggested she turn her lens to younger dogs as well. Yes, there were accidents, but overall, the pups were the perfect models; since they tend to be more responsive than older dogs, it was relatively easy to get them to shake after being wetted or carefully jostled. 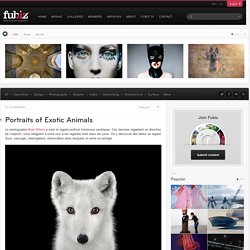 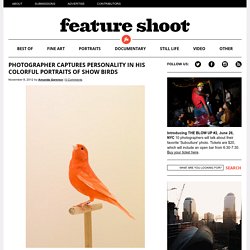 I met a great deal of people (mostly men) who were very knowledgeable about their hobby and only too happy to share it with me. Their enthusiasm became infectious so that by simply photographing a species I felt I was adding it to my collection. —Luke Stephenson Luke Stephenson is a Britain-based photographer often recognized for his humorous and affectionate portraits of both animate and inanimate objects.

He is represented by The Photographers Gallery in London. An Incomplete Dictionary of Show Birds is his new book, featuring 60 color plates and available in four limited edition covers. This post was contributed by contributing editor Amanda Gorence. Announcing The BlowUp 2: 10 photographers talk about their favorite ‘SUBCULTURE’ photo. Claire Rosen's Striking Portraits of Birds. Birds of a Feather by NYC-based Claire Rosen, is a portrait series of live birds ranging from the common Parakeet to the exotic Hyacinth Macaw. 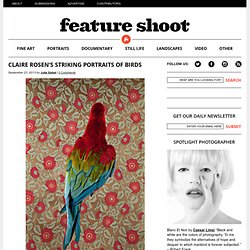 The birds are posed against complimentary vintage looking wallpaper to encourage optical illusion and visual blending. At the time Rosen had just finished a series of taxidermy animal still life images for a residency in upstate New York at the Millbrook School. The series, which was photographed on all black, was very dark and she wanted to work on something a bit lighter.

She began brainstorming about less traditional background options and came up with the idea to use vintage wallpaper. She gathered inspiration from Victorian Optical Illusion Postcards, hence her blend of bird and background. Feature Shoot Contributing Editor Julia Sabot is the Associate Photo Editor at Dwell. Adorable Shelter Dogs Resemble Famous Authors in "Poetic Dogs" Series. Portraits of Shelter Dogs Resembling Your Favorite Authors and Poets. Charles Bukowski Charles Dickens Charles Pierre Baudelaire When Italian photographer Dan Bannino adopted his dog Rothko from a shelter last March, he was overcome by tears, both for himself and for his new best friend. 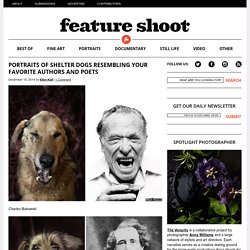 Rothko’s unconditional love serves as the motivation for Poetic Dogs, in which Bannino couples homeless shelter dogs with his favorite authors and poets. Animal portraits by Morten Koldby. Gregory Colbert. Gregory Colbert's Ashes and Snow is an ongoing project comprised of photographic artworks, a one-hour film, two short films, and a novel in letters. 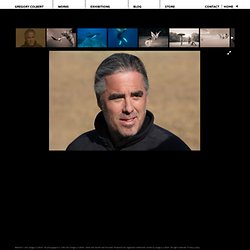 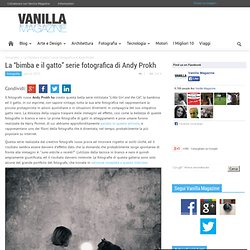 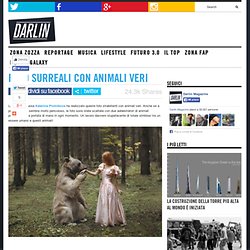 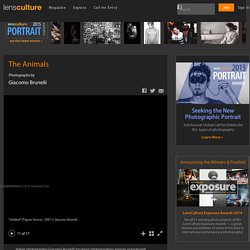 By pushing the lens to its closest point of focus, almost touching the subject, he forces the animals to either flight or fight, which is exactly the moment he releases the shutter. It is all about capturing that moment of reaction, triggered through various approaches that vary from animal to animal. Whether it is ignoring them, running after them or using their natural curiosity for the shot, Brunelli's images are striking for their immediacy as a direct consequence of the intervention by the photographer.

Shot with a Japanese camera from the '60s, Brunelli's use of morning twilight or diffused light on a cloudy day adds to the haziness of the atmosphere and the fleetingness of the moment.