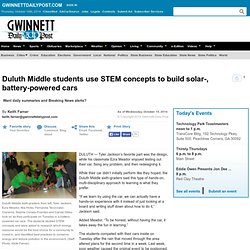 The students studied STEM concepts and were asked to research which energy resource would be the best choice for a community to invest in, and identified best practices to conserve energy and reduce pollution in the environment. (Staff Photo: Keith Farner) #DULUTH — Tyler Jackson’s favorite part was the design, while his classmate Ezra Meador enjoyed testing out their car, fixing any problem, and then redesigning it. #While their car didn’t initially perform like they hoped, the Duluth Middle sixth-graders said this type of hands-on, multi-disciplinary approach to learning is what they prefer. #“If we learn by using the car, we can actually have a hands-on experience with it instead of just looking at a board and writing stuff down about how to do it,” Jackson said. Spotlight Q&A: Arthur Levine on Raising the Bar for New Teachers.

Arthur Levine has never been shy about expressing his views on teacher education, and specifically what he thinks isn’t working. 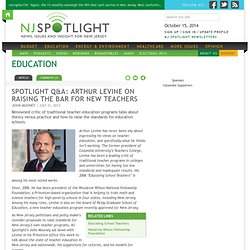 The former president of Columbia University’s Teachers College, Levine has been a leading critic of traditional teacher programs in colleges and universities for having too low standards and inadequate results. His 2006 “Educating School Teachers” is among his most noted works. Since, 2006, he has been president of the Woodrow Wilson National Fellowship Foundation, a Princeton-based organization that is helping to train math and science teachers for high-poverty schools in four states, including New Jersey.

Among his many roles, Levine is also on the board of Relay Graduate School of Education, a new teacher education program recently approved for New Jersey. Q: Speak to the state of teacher education and preparation in New Jersey and nationwide. A: The problems of teacher education are the same all over the country. Educating_Teachers_Exec_Summ.pdf. Q. & A. With Arthur Levine. Many critics of these international competitions say it’s unfair to compare test results from homogeneous countries to a diverse country like the United States. 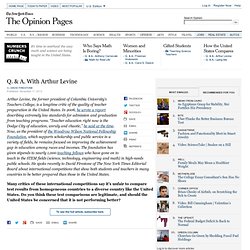 Do you think these test comparisons are legitimate, and should the United States be concerned that it is not performing better? I think the comparisons are important. We live in a world in which our children aren’t competing for jobs against people in the next town — they’re competing for jobs against people in other countries. It’s critical that we understand how our students compare to those students. The future of this country, in an information society, is dependent on how well we do in comparison to other countries.

Why are Asian countries always clustered in the top ranks? They are countries that start earlier. Should we be trying to emulate their methods, or do you think much of what they do wouldn’t work in the United States? The Woodrow Wilson Teaching Fellowships. The Woodrow Wilson Teaching Fellowship seeks to attract talented, committed individuals with backgrounds in the STEM fields—science, technology, engineering, and mathematics—into teaching in high-need secondary schools in Georgia, Indiana, Michigan, Ohio, and New Jersey. 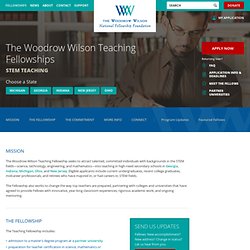 Eligible applicants include current undergraduates, recent college graduates, midcareer professionals, and retirees who have majored in, or had careers in, STEM fields. The Fellowship also works to change the way top teachers are prepared, partnering with colleges and universities that have agreed to provide Fellows with innovative, year-long classroom experiences, rigorous academic work, and ongoing mentoring. Project-Based Learning.

Ten Websites for Science Teachers. We all know that the web is full of excellent web resources for science teachers and students. 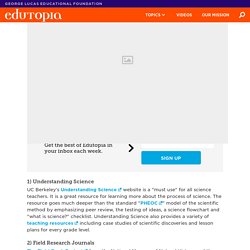 However, unless you live on the web, finding the best websites can become quite a challenge. This isn't a "Top Ten" list -- instead, it is a list of websites that I either use on a regular basis or just find interesting. From teaching resources for the nature of science and authentic field journals to wacky videos about numbers, I am sure that you will find something in the following list the works for you! Please share your favorite science web resources in the comment section! About — Tinkering School San Francisco. Brightworks: An Extraordinary School. The Arc is the fundamental rhythm of a Brightworks education. 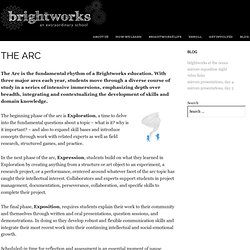 With three major arcs each year, students move through a diverse course of study in a series of intensive immersions, emphasizing depth over breadth, integrating and contextualizing the development of skills and domain knowledge. The beginning phase of the arc is Exploration, a time to delve into the fundamental questions about a topic – what is it? Why is it important? – and also to expand skill bases and introduce concepts through work with related experts as well as field research, structured games, and practice.

In the next phase of the arc, Expression, students build on what they learned in Exploration by creating anything from a structure or art object to an experiment, a research project, or a performance, centered around whatever facet of the arc topic has caught their intellectual interest. Then it’s time to begin again.