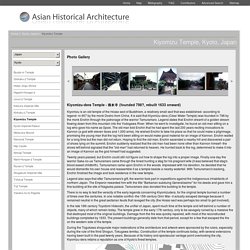 , rebuilt 1633 onward) Kiyomizu is an old temple of the Hosso sect of Buddhism, a relatively small sect that was established--according to legend--in 657 by the monk Dosho from China. It is said that Kiyomizu-dera (Clear Water Temple) was founded in 798 by the monk Enchin through the patronage of the warrior Tamuramaro. Legend states that Enchin dreamt of a golden stream flowing down from this mountain into the Yodogawa River. Twenty years passed, but Enchin could still not figure out how to shape the log into a proper image. Legend also says that after Tamuramaro's gift, the warrior took part in expeditions against the indigeonous inhabitants of northern Japan. There is no way to test the veracity of the early legends concerning Kiyomizudera, for the original temple burned a number of times over the centuries. Click on any of the red arrows to view that location. Location Map Data. Kyoto Travel: Kiyomizudera Temple. Kiyomizudera (清水寺, literally "Pure Water Temple") is one of the most celebrated temples of Japan. 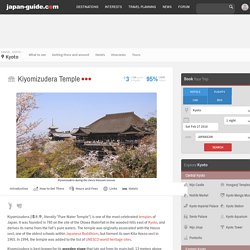 It was founded in 780 on the site of the Otowa Waterfall in the wooded hills east of Kyoto, and derives its name from the fall's pure waters. The temple was originally associated with the Hosso sect, one of the oldest schools within Japanese Buddhism, but formed its own Kita Hosso sect in 1965. In 1994, the temple was added to the list of UNESCO world heritage sites. Kiyomizudera is best known for its wooden stage that juts out from its main hall, 13 meters above the hillside below. The stage affords visitors a nice view of the numerous cherry and maple trees below that erupt in a sea of color in spring and fall, as well as of the city of Kyoto in the distance. Behind Kiyomizudera's main hall stands Jishu Shrine, a shrine dedicated to the deity of love and matchmaking. The Otowa Waterfall is located at the base of Kiyomizudera's main hall.

Japanische Popkultur 2: Manga. Anime und Manga in Japan - Work and Travel Japan. Tokyo Travel: Akihabara. Akihabara (秋葉原), also called Akiba after a former local shrine, is a district in central Tokyo that is famous for its many electronics shops. 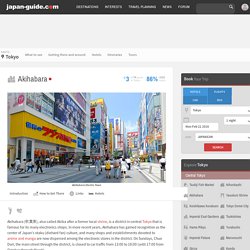 In more recent years, Akihabara has gained recognition as the center of Japan's otaku (diehard fan) culture, and many shops and establishments devoted to anime and manga are now dispersed among the electronic stores in the district. On Sundays, Chuo Dori, the main street through the district, is closed to car traffic from 13:00 to 18:00 (until 17:00 from October through March). Akihabara has been undergoing major redevelopment over the years, including the renovation and expansion of Akihabara Station and the construction of new buildings in its proximity. 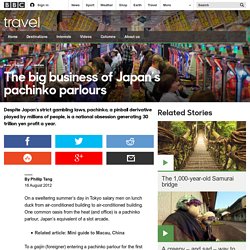 One common oasis from the heat (and office) is a pachinko parlour, Japan’s equivalent of a slot arcade. Related article: Mini guide to Macau, China To a gaijin (foreigner) entering a pachinko parlour for the first time, the first thing that hits you is the fog of cigarette smoke, a harsh difference from the no-smoking laws in other parts of the developed world. Inside is uniquely Japanese. Row upon row of pachinko machines echo a cacophony of bells and cartoon voices, and the mostly male players sit rigid, watching silver balls bounce around (pachin refers to the sound of the ‘ko’, or ball), hoping they will fall down into the winning centre hole. Akihabara Area Guide. Akihabara Guide Akihabara is geek central – probably the highest concentration of electronics shops and definitely the highest concentration of manga and anime figurine shops and maid cafes. 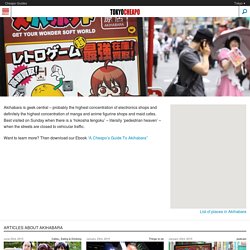 Best visited on Sunday when there is a ‘hokosha tengoku’ – literally ‘pedestrian heaven’ – when the streets are closed to vehicular traffic. Want to learn more? Welcome to Vending Machine Hell, Where You'll Be Threatened with Brutality. 8 Things to look out for when in Akihabara. Akihabara is truly the Japan’s capital of “otaku” – often translated as ‘someone who has obsessive interests in video games, manga, anime, electronics and the like’. 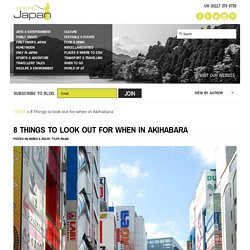 There’s more manga and anime in this little district of Tokyo than exists anywhere else in the world. But whether you consider yourself a fan of such things completely misses the point; this neighborhood is a traveler’s dream because it is unlike anywhere else any of us have ever been and will ever go to. And isn’t that why we travel in the first place? Exploring Akihabara, Japan’s Electronic Market: NIPPONIA No. 46. NIPPONIA No. 46 September 15, 2008 Special Feature Exploring Akihabara, Japan’s Electronic Market So many big and small stores, selling so many electronic parts, computers, animé software, and other products for modern media lifestyles—it’s no wonder that Akihabara has such global appeal. 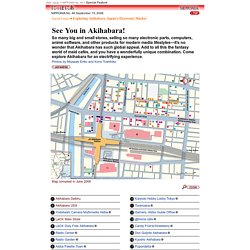 Add to all this the fantasy world of maid cafés, and you have a wonderfully unique combination. Come explore Akihabara for an electrifying experience. Photos by Miyazaki Eriko and Kono Toshihiko. How to Be Decora: 12 Steps. Japanese popular culture. Kawaii[edit] Kawaii is a Japanese term which means "cute" and "beautiful". 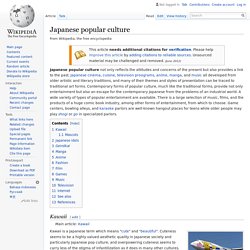 29 Wonderfully Cute And Quirky Japanese Mascots. What can you say about Japan that hasn't already been said? 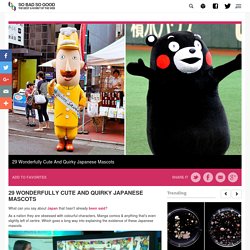 As a nation they are obsessed with colourful characters, Manga comics & anything that's even slightly left of centre. Which goes a long way into explaining the existence of these Japanese mascots. Designed to represent national parks, suburbs, airports, TV stations, popular streets, historical landmarks and even cities themselves. Each has their own unique story and whilst they are at times incredibly cute, they're also utterly random & ridiculous in equal amounts. Here's 29 of the best, if you want to have you photo with them or meet them in person we've included where you'll be able to find them! 1. 2. A Beginners Guide to Japanese Fashion Subcultures for Guys. Sich im Harajuku Stil kleiden. Kogal - Gyaru Wiki - Wikia. Kogal|コギャル|kogyaru}} is a subculture of conspicuous consumption among girls and young women in urban Japan Is is one of several types of so-called gyaru, or peer conscious social groupings. 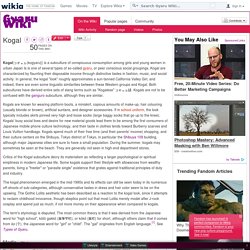 Kogal are characterized by flaunting their disposable income through distinctive tastes in fashion, music, and social activity. In general, the kogal "look" roughly approximates a sun-tanned California Valley Girl, and indeed, there are even some linguistic similarities between these Western groups and Kogal. Both subcultures have derived entire sets of slang terms such as "Kogalese" コギャル語. Kogals are not to be confused with the ganguro subculture, although they are similar. Kogals are known for wearing platform boots, a miniskirt, copious amounts of make-up, hair coluoring (usually blonde or brown), artificial suntans, and designer accessories. Ganguro ~Black Community in Japan - Akiba Nation.

Japanese are worldly famous for their whitish skin, which they often picked into skin whitening products commercials in the Asian region. There are thousands, if not millions woman in the Asian region, who have been brainwashed by the commercial agents to follow what so called the purity of Japanese white skin. The beautiful white skin of Japanese has been a trademark globally. On the other hand, not all Japanese people are proud with their white skin. Hokusai in Full View Berlin 2011. Seiji Nagata (Curator, Hokusai-Retrospective: The 150th Anniversary of Friendship between Japan and Germany) Kotobuki Shiriagari (Manga artist) Moderated by Tae Mori (Visual Arts Section, The Japan Foundation) Cultural and commercial exchanges between Japan and Germany (Prussia at the time) began 150 years ago, in 1861, when a Treaty of Amity and Commerce was concluded between the two nations. It was the late Edo period in Japan and only some 10 years had elapsed since Hokusai, a genius ukiyo-e artist, had passed away (1760-1849).

Back then, Hokusai's work was already influencing artists in Europe, and Japonism was beginning to spread its wings. Today, Nagata Seiji, curator of the Hokusai retrospective in Berlin, and Shiriagari Kotobuki, a manga artist whose versatile comics are known both in Japan and around the world, will talk about the image of pre-modern Japan that Hokusai conveyed to the world and the power of his art that still captivates people today. Vortrag - Japanische Popkultur - Part 1 [HD] - Kagayaku no Kûsô.

The first of the baby boomers are turning 60 this year - and the BBC is running a series of articles and interviews to mark the milestone. Here the BBC's Chris Hogg in Tokyo examines Japan's looming demographic problems. They call it the 2007 problem here. Japan's first generation of baby boomers born between 1947 and 1949 will retire next year. Together they represent more than 8% of the country's workforce. Many of this first wave of boomers will retire at once because surveys suggest only about one in five corporations plans to provide jobs to those over 60. So Japanese industry will lose the generation of highly skilled workers who helped drive Japan's recovery in the decades after World War Two. Cosplay. What Harajuku Girls Really Look Like.