Watch The Animated Story Of Sun Ra’s Afrofuturist Journey, Narrated By Little Simz. Sun Ra was the living embodiment of Afrofuturism as a concept, a mythical figure with a huge body of groundbreaking work that feels extra prescient today. 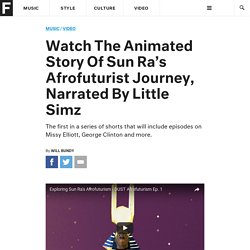 A new, animated video from streamable sci-fi hub DUST tracks his legacy back to its origin story, a self-reported alien abduction in Huntsville, Alabama. To narrate the story, DUST recruits Little Simz, who grounds highlights from the Arkestra leader's biography with important context and analysis. After providing a big picture overview of Sun Ra's Afrofuturist philosophy—centered on escapism in the face of oppression—she asks, "What does it say about how far we have, or have not come if this message still resonates with each new generation.

" The short is part of an ongoing series on Afrofuturism that Okayplayer tells us will include episodes on George Clinton, Jimi Hendrix, and Missy Elliott. My Sun Ra Adventures. Excerpt of Dead People, by Stefany Anne Golberg and Morgan Meis. Sun Ra In the Egyptian section of the Penn Museum stands a man. 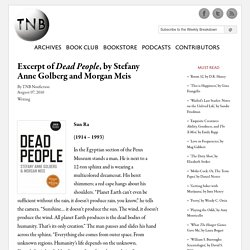 He is next to a 12-ton sphinx and is wearing a multicolored dreamcoat. His beret shimmers; a red cape hangs about his shoulders. “Planet Earth can’t even be sufficient without the rain, it doesn’t produce rain, you know,” he tells the camera. “Sunshine… it doesn’t produce the sun. Sun Ra research, iss. 05 (February, 1996)... Rare Sun Ra singles to be issued on space-age 7″ vinyl. KNOWLEDGE BOOK. Our Planet, which has lost a lot of its qualities in the material, spiritual and the natural aspects is being restored again. 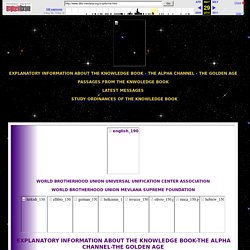 Events that have been experienced and will be experienced will unify humanity in a Totality by making it attain the Consciousness of Truth. In the Period we live in, there are a several Spiritual Focal Points rendered effective, by human beings awakened through the Cosmic Influences given from the 10th Dimension at the beginning and especially at the second half of the 20th century as the Missionary Staff. And everyone has applied and is applying either Consciously or Unconsciously the influences they have received. In this Last Age, Focal Points acting towards the same aim and Idea have lived a period of preparation until today. FORMATION - LIFE - REINCARNATION. Our Friends, On behalf of the entire Universes and Cosmoses, the Divine Justice Mechanism greets your planet, which has stepped into the Second Cosmic Age. 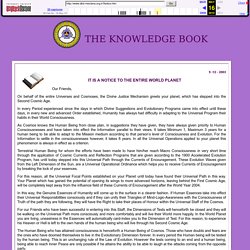 In every Period experienced since the days in which Divine Suggestions and Evolutionary Programs came into effect until these days, in every new and advanced Order established, Humanity has always had difficulty in adapting to the Universal Program their habits in their World Consciousness. As Cosmos knows the Human Being from close plan, in suggestions they have given, they have always given priority to Human Consciousnesses and have taken into effect the Information parallel to their views. It takes Minimum 1, Maximum 3 years for a human being to be able to adapt to the Mission medium according to that person’s level of Consciousness and Evolution. KNOWLEDGE BOOK. Q&A with ESP-Disk Founder Bernard Stolllman. 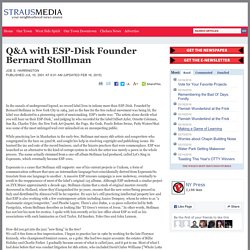 Harrington Published Jul 10, 2001 at 6:01 am (Updated Feb 16, 2015) In the annals of underground legend, no record label lives in infamy more than ESP-Disk. On The Cricket: An Interview with Amiri Baraka. David Henderson (poet) David Henderson (born 1942) is an American writer and poet. 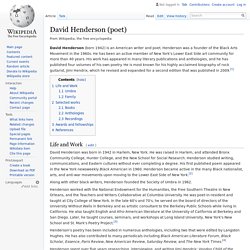 Henderson was a founder of the Black Arts Movement in the 1960s. He has been an active member of New York’s Lower East Side art community for more than 40 years. His work has appeared in many literary publications and anthologies, and he has published four volumes of his own poetry. He is most known for his highly acclaimed biography of rock guitarist, Jimi Hendrix, which he revised and expanded for a second edition that was published in 2009.[1] David Henderson was born in 1942 in Harlem, New York. Bassist-turned-arranger Richard Evans put the soul in Cadet Records - Wax Poetics. From the late 1960s to the early 1970s, Richard Evans was the main man behind Chicago’s groundbreaking soul-jazz record label Cadet, a subsidiary of the successful blues label Chess. 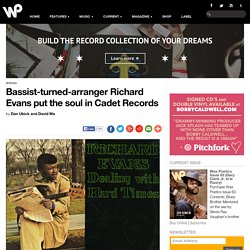 In the early ’60s, Richard not only took Charles Stepney under his wing but also played bass with Sun Ra and befriended a young, talented organ player named Donny Hathaway. As the ’60s neared their end and popular music became more psychedelic, Leonard Chess’s son, Marshall, took over the business, and Richard was promoted to full-fledged in-house arranger. He would soon become much more. Originally published as “Soul Conductor” in Wax Poetics Issue 34 Successful LPs by Woody Herman (1970’s Grammy-nominated Light My Fire), the Soulful Strings, and Marlena Shaw (1969’s The Spice of Life) brought the fuzz and echo of ’60s rock into the mix at Cadet sessions. Tell us a little bit about your upbringing and when you were first introduced to music. FROM SONNY BLOUNT TO SUN RA: The Chicago Years. © Robert L. 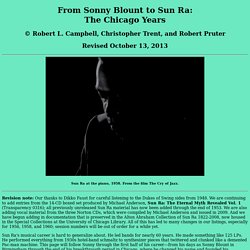 Campbell, Christopher Trent, and Robert Pruter Revised October 13, 2013 Sun Ra at the piano, 1958. From the film The Cry of Jazz. Revision note: Our thanks to Dikko Faust for careful listening to the Dukes of Swing sides from 1948. Pat patrick and the baritone saxophone retinue - sound advice (shop excerpts) by Experimedia. From the Archives: "Sanford and Sun" by Otabenga Jones and Associates - Questions of Practice - The Pew Center for Arts & Heritage. From the introduction: We speak to you from the lower frequencies. 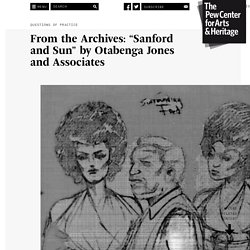 Vibrating from the Earth’s core, reverberating out through the cosmos, to furthest edges of the universe, scraping the planes of thoughts yet to be. We are Otabenga Jones and Associates. In 1974 Gill Scott-Heron scribed the poem “The Revolution Will Not Be Televised.” It was an epic screed against the limits of the new television consciousness. The pages that follow hold his only produced script, and a few stolen wardrobe sketches he managed to escape from L.A. with. Although this was a project done years before the formalized organization of Otabenga Jones and Associates, it still offers an anecdotal example of how we wrestle with history to become one of its primary framers.

Download the full article (PDF) > Sun Ra Music Channel Community Friends – Communauté – Google+ Other Planes of There: Space is the Place, Remembered Four Decades Later. Sun Ra - Best Answer on Music. John Gilmore, 63, Saxophonist In the Avant-Garde of Jazz. Correction Appended John Gilmore, a tenor saxophonist who helped define the sound of the avant-garde during four decades with the Sun Ra Arkestra, died on Sunday at Germantown Hospital in Philadelphia. 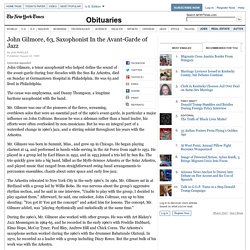 He was 63 and lived in Philadelphia. The cause was emphysema, said Danny Thompson, a longtime baritone saxophonist with the band. Mr. 10 Things Sun Ra Can Teach Us About Band Leadership – Soundfly. Sun Ra (born Herman Poole Blount, 1914–1993) was an American jazz composer, bandleader, piano and synthesizer player, poet and philosopher known for his “cosmic philosophy,” prolific musical output, and energetic experimental big-band performances. He widely claimed (and legitimately believed) he was born on Saturn and was over 5,000 years old. Ra released over 200 albums, many of which were home-recorded to tapes that he copied himself or cut to vinyl in small batches and sold at shows.

He pioneered a lot of experimentation with technology in jazz and free jazz starting as early as the 1950s in Chicago. A funny tidbit about Sun Ra is that as he was experimenting with early synthesizer keyboards, electronics and tape delay, he was given one of the first prototypes of the Minimoog by Robert Moog to play around with before it even went on the market. Here are 10 things Sun Ra can teach us about band leading: 1- Find a language that only your band speaks, and master it. Great Black Music Project Podcast Kelan Phil Cohran on his time with Sun Ra's band SD. RECORD STORE DAY - SpecialRelease. RECORD STORE DAY - SpecialRelease. Sun Ra Calling Planet Earth DETAILS Format: LP Label: ORG MUSIC Release type: 'RSD First' Release More Info: Calling Planet Earth comes from a concert recorded at Tivoli Hall in Copenhagen, Denmark on December 5, 1971.

Recorded direct from the soundboard and mastered from first generation reel to reel, the title is exclusively available for Record Store Day 2015. Sun Ra and his Arkestra had just completed a residency at the legendary Gibus in Paris in October before traveling to Amiens for a visceral Sunday afternoon concert. #radicalinthought #curiousinnature. UChicago Arts: sun ra. Friday, May 22, 1-6pmLogan Center, Room TBD On the occasion of his 101st birthday, we invite you to join us for a screening and symposium that will explore and unpack the connections between the ideologies of Black resistance movements and the "cosmic" philosophies of accomplished composer, jazz pianist, band leader, and poet, Sun Ra.

The symposium will both reflect upon and anchor the philosophical foundation of Sun Ra's Astro Black Mythology in a contemporary conversation around Afro-futurism and movements such as #BlackLivesMatter. Participants include D. Denenge Akpem, David Boykin, Breanna Champion, William Faber, Anthony Reed, William Sites, Greg Tate, Ytasha Womack, and Marvin X. Keynote address by Thomas Stanley. 100th Anniversary of the Earth Arrival of Sun Ra. "Space Is Still The Place: Sun Ra Artists' Talk" Sun Ra. Sun Ra’s business cards: ‘Why buy old sounds?’ These little cards and advertisements that Sun Ra had printed up during his Chicago days in the 1950s are fantastic.

Note that the DRexel telephone number is different on this one, by one digit: Possibly he didn’t have this ticket printed up, but it’s still nice: SUN RA Trademark - By: Barron, Farid. SUN RA MUSIC CHANNEL (OFFICIAL) Part 3 of Exclusive Interview with Irwin Chusid, Administrator for Sun Ra LLC. WKCR 2010 Sun Radio Omniversity Part 1 Playlist: Sun Ra Arrival Day Celebration. The secret history of the jazz greats who were freemasons. When the City of London festival found out about a long dormant masonic temple that had been uncovered next to Liverpool Street station, it seemed obvious that this wonderfully opulent hall should be used as a one-off music venue.

The only question was – what music should it host? “The obvious choice would have been to host a Mozart recital, because everyone knows that Mozart was a freemason,” says Paul Gudgin, former director of the Edinburgh Fringe and now director of the City of London Festival. Interview with Ray "The Overseer" Johnson. 21 Sun Ra Albums Are Released on iTunes. Astro Black - fyeahblackhistory: The Temple of Isis Pompeii. ...

Kwame Hadi (HadiKwame) Sun Ra's 100th (sunra100) Sun Ra. Live and Out of Print CDs Rating system- audio/video quality: 1-10/10 10 perfect to 1 unlistenable Unless noted, all boots are audio CDs and are one CD. Rare Ra- WXPN Poetry Reading 12/25/76, Saturn 999: A Blue One / Orbitration in Blue - 45 RPM single (this was not collected in the Singles collection)- cassette/dat- flac- Free Saturn: the Sun Ra trading group. Untitled Document. Earthly Extension. Sun Ra. SUN RA TAPES. Interview with Sun Ra. "I Pretty Much Grew Up Going To Sun Ra's House": an Interview With Fhloston Paradigm. As cult UK label Hyperdub celebrates its 10th birthday this summer, even a cursory look back through the years shows up some of the most forward-thinking electronic music of recent times.