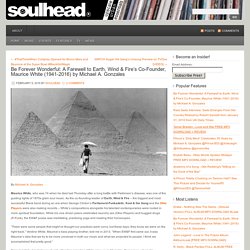 Gonzales Maurice White, who was 74 when he died last Thursday after a long battle with Parkinson’s disease, was one of the guiding lights of 1970s glam soul music. As the co-founding leader of Earth, Wind & Fire – the biggest and most successful Black band during an era when George Clinton’s Parliament-Funkadelic, Kool & the Gang and the Ohio Players were also making records – White’s compositions alongside his talented contemporaries were rooted in more spiritual foundation. While his vice driven peers celebrated raunchy sex (Ohio Players) and bugged drugs (P-Funk), the EW&F posse was meditating, practicing yoga and reading their horoscopes. George Duke. George Duke-Spock Does The Bump At The Space Disco. Take The Power Back: The story of five black artist-owned labels. Temptations - Power. Temptations - Shakey Ground.

The Mess We Made by tomasdoncker. Multi-Dimensional, Polyrhythmic Gangster Shit. Rollingstone. They all know Thundercat at the ramen spot. 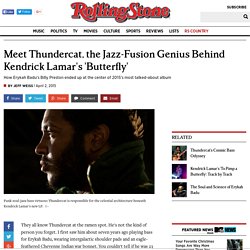 He's not the kind of person you forget. I first saw him about seven years ago playing bass for Erykah Badu, wearing intergalactic shoulder pads and an eagle-feathered Cheyenne Indian war bonnet. You couldn't tell if he was 23 or 230, the son of Bootsy Collins or Sitting Bull, a legendary session player or an Afro-Futurist anime hero. The answers still aren't entirely clear, but this much is crystalline: Thundercat is Stephen Bruner, a bassist with perfect pitch who has released two brilliant albums on Flying Lotus' Brainfeeder imprint. Splitting the difference between Bowser's Castle overtures and George Duke, they encompass jazz, funk, soul and the occasional love groove to ecstasy or a pet cat.

"A part of me almost didn't feel comfortable talking to anybody," Bruner says, shortly after sitting down at his go-to noodle spot, not far from his Koreatown home. THUNDERCAT THE AMAZING! Donny McCaslin with Tim Lefebvre, Mark Guiliana, Jason Lindner @ 55 Bar NYC. An Inescapable Voice on “Black Messiah” - The New Yorker. After more than a decade of near silence, rumors, and rampant speculation, the elusive soul singer, composer, and multi-instrumentalist D’Angelo dropped “Black Messiah” on December 15th. 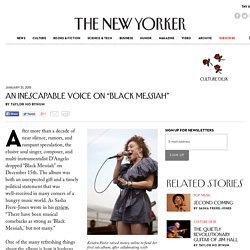 The album was both an unexpected gift and a timely political statement that was well-received in many corners of a hungry music world. As Sasha Frere-Jones wrote in his review, “There have been musical comebacks as strong as ‘Black Messiah,’ but not many.” D’Angelo Reborn - The New Yorker. Almost three years ago, some friends gathered around a laptop in my apartment and watched footage apparently shot on a smartphone of a concert given a few days earlier, in Paris. 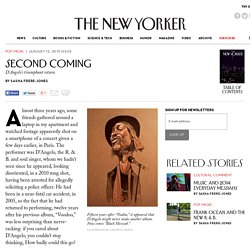 The performer was D’Angelo, the R. & B. and soul singer, whom we hadn’t seen since he appeared, looking disoriented, in a 2010 mug shot, having been arrested for allegedly soliciting a police officer. He had been in a near-fatal car accident, in 2005, so the fact that he had returned to performing, twelve years after his previous album, “Voodoo,” was less surprising than nerve-racking: if you cared about D’Angelo, you couldn’t stop thinking, How badly could this go? Ain't nuttin' like nuttin' The Isley Brothers - It's Too Late (1973) (Live) Ohio/Machine Gun-The Isley Brothers-1973. Download DJ Gioumanne’s Afro Cosmic Club Volume 2. The Bravest Man In The Universe. Oakland, Berkeley & the Bay Area. Rickey Vincent grew up around The Black Panther Party. 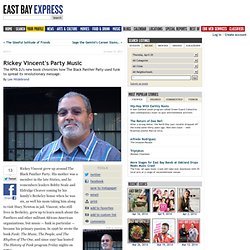 His mother was a member in the late Sixties, and he remembers leaders Bobby Seale and Eldridge Cleaver coming by his family's Berkeley house when he was six, as well his mom taking him along to visit Huey Newton in jail. Vincent, who still lives in Berkeley, grew up to learn much about the Panthers and other militant African-American organizations, but music — funk in particular — became his primary passion. In 1996 he wrote the book Funk: The Music, The People, and The Rhythm of The One, and since 1997 has hosted The History of Funk program Friday nights on KPFA. His interests in politics and music intersected in 2002 when rapper Boots Riley of The Coup told him that the party had an official singing group called The Lumpen. Fellow KPFA programmer Walter Turner played him a copy of the soul quartet's only record, an ultra-rare 45 titled "Free Bobby Now," released in the summer of 1970. "We were not entertainers. Harvestworks Primus Luta Performance. 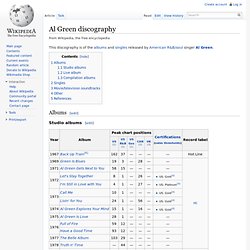 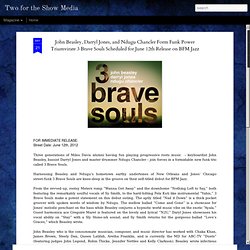 Harnessing Beasley and Ndugu’s hometown earthy undertones of New Orleans and Jones’ Chicago street-funk 3 Brave Souls are knee-deep in the groove on their self-titled debut for BFM Jazz. From the revved-up, rootsy Meters romp “Wanna Get Away” and the downhome “Nothing Left to Say,” both featuring the remarkably soulful vocals of Sy Smith, to the hard-hitting Fela Kuti like instrumental “Yabis,” 3 Brave Souls make a potent statement on this debut outing. The aptly titled “Nail it Down” is a thick pocket groover with spoken words of wisdom by Ndugu. The mellow ballad “Come and Gone” is a showcase for Jones’ melodic penchant on the bass while Beasley conjures a hypnotic world music vibe on the exotic “Ayala.” Larry Graham - Credits. Breakin'bread by thecoloredsection. Motown bass player, 74. Return of The Soul Brother. I caught D’Angelo on the BET Awards the other night. 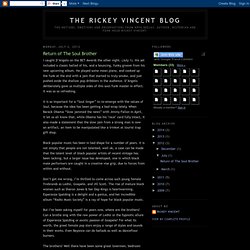 (July 1). His set included a classic ballad of his, and a bouncing, funky groove from his new upcoming album. He played some mean piano, and cooked up the funk at the end with a jam that started to truly smoke, and just pushed aside the shallow pop dribblers in the audience. D’Angelo deliberately gave us multiple sides of this soul/funk master in effect. It was so so refreshing. It is so important for a “Soul Singer” to re-emerge with the values of Soul, because the idea has been getting a bad wrap lately. Black popular music has been in bad shape for a number of years. Don’t get me wrong, I’m thrilled to come across such young female firebrands as Ledisi, Goapele, and Jill Scott. D'Angelo makes long-awaited return to TV at BET Awards - Celebrity Circuit. LOS ANGELES, CA - JULY 01: Singer D'Angelo performs onstage during the 2012 BET Awards at The Shrine Auditorium on July 1, 2012 in Los Angeles, California. 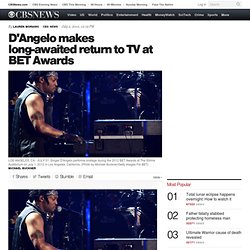 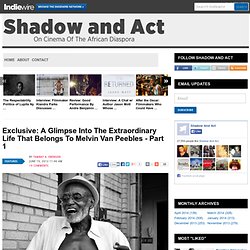 It was a moment I wouldn't soon forget. In short, during the tribute, which had the likes of Armond White, George Alexander, and Esther Iverem as panelists, a number of attendees in the audience lamented the state of this thing we call "black cinema," mourning the loss of one of its leaders, and the void in leadership his absence left. Just about every head turned to either find out who this bold and abrasive voice belonged to (or already knew it was Melvin Van Peebles, but turned to acknowledge him anyway); the room fell silent as he continued, and remained that way for a few moments after he ended what probably felt like a scolding to some, almost as if shamed.

And don't be fooled by his slight stature; his confidence is unrivaled. I did... And once settled, to be later joined by Mr.

Jimi Hendrix Happy Birthday. Derek's Daily 45. Samuel Yirga - I Am The Black Gold Of The Sun by Real World Records. MP3 Music Albums Search & Download: mediafire, megaupload, youtube, zippyshare, rapidshare, torrent. ?uestlove's Bonnaroo SuperJam feat. D'Angelo - She Came In Through the Bathroom Window. James Brown And The Famous Flames - Cold Sweat - Part 2 (King 6110) Booker T. & The M.G.'s Discography. Meltdown Show. March 10, 1979-The Night James Brown Played The Opry. I mentioned before that March was one of the more active months in the history of the Grand Ole Opry, and one of the more unusual events took place on March 10, 1979 when James Brown, at the invitation of Porter Wagoner, performed on the Grand Ole Opry. Porter had met James several times over the years. It was during one of those visits that Porter told James, "You ought to come to the Grand Ole Opry.

They are among those bands who endeavour to replicate the sounds of the past and to lend them a contemporary edge, but rather than simply aping their favourite artists of bygone times, Calibro 35 immerse themselves in a specific aesthetic – the film music of 1960s and 1970s Italian cinema. These musicians have explored – mined – the soundtracks of that violent, vibrant stable, from bloody giallo slasher flicks to poliziotteschi car chase-filled”tough cop” outings. Calibro 35 have always both covered pieces from such films and written songs of their own in the same style – on their second album Ritornano Quelli Di… the emphasis leans slightly more to the originals, but the uninitiated will have no chance of telling the difference.