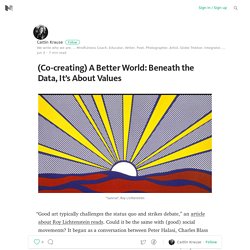 Could it be the same with (good) social movements? It began as a conversation between Peter Halasi, Charles Blass and me: what does it actually mean, to envision and act toward “a better world”? Better for whom? What are the terms? This was to be an experiment, from the start, without (too much) explanation for our targeted population of respondents, who ideally would have little to no exposure to the phrase or context of “ABW”, a group and a movement that by now is part of our own minds and hearts. There were limits set by the request: only 5 keywords; the universal prompt (that we made together, for consistency); limited sample size.

Again, it seems to be about asking the right question, and taking time to scrub data, to decide the best way to reflect content. Consistency and validation are key. Results evaluation: Internet Sites in Tune With the Genre - latimes. With everything else exploding all over the World Wide Web, it's not surprising that jazz, of every shape and style, is flourishing in cyberspace as well. 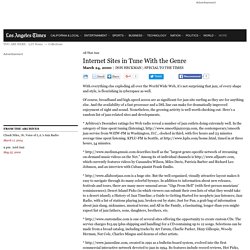 Of course, broadband and high-speed access are as significant for jazz-site surfing as they are for anything else. And the availability of a fast processor and a DSL line can make for dramatically improved enjoyment of sight and sound. Nonetheless, the growing activity is well worth checking out. Here's a random list of jazz-related sites and developments. * Arbitron's December ratings for Web radio reveal a number of jazz outlets doing extremely well. . * describes itself as the "largest genre-specific network of streaming on-demand music videos on the Net.

" * is a huge site. . * is one of several sites offering the opportunity to create custom CDs. . * created in 1991 as a bulletin-board system, evolved into the first commercial interactive network devoted to jazz in 1994. JAZZ REVIEW - With a Cry From the Horns And a Southern Birthright. Some American jazz musicians will always be fascinated with updating and expanding old vernacular Southern music -- music of honky-tonks and parades and funerals -- and for good reason: as jazz becomes increasingly shared by the world, both harder to define and easier to stumble across, the Southern sources remain an American's birthright. 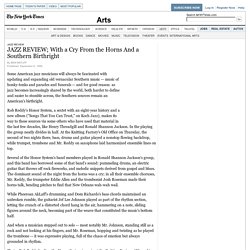 Rob Reddy's Honor System, a sextet with an eight-year history and a new album (''Songs That You Can Trust,'' on Koch Jazz), makes its way to these sources via some others who have used that material in the last few decades, like Henry Threadgill and Ronald Shannon Jackson. In the playing the group neatly divides in half. At the Knitting Factory's Old Office on Thursday, the second of two nights there, bass, drums and guitar played a nonstop flowing backdrop, while trumpet, trombone and Mr.

Reddy on saxophone laid harmonized ensemble lines on top. And when a musician stepped out to solo -- most notably Mr. 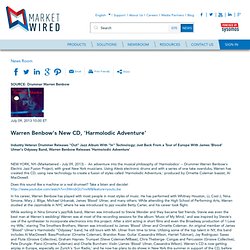 Using Alesis electronic drums and with a series of one take overdubs, Warren has created this CD, using new technology to create a fusion of styles called 'Harmolodic Adventure,' produced by Ornette Coleman bassist, Al MacDowell. Does this sound like a machine or a real drumset? Take a listen and decide! In his career, Warren Benbow has played with most people in most styles of music. While working in Nina Simone's jazz/folk band, Warren was introduced to Stevie Wonder and they became fast friends. SociaLybrium promo trailer - For You. Track 1 by brooklynspo.