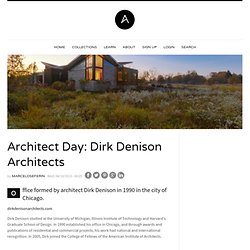 In 1990 established his office in Chicago, and through awards and publications of residential and commercial projects, his work had national and international recognition. In 2005, Dirk joined the College of Fellows of the American Institute of Architects. Carmel Residence, Califórnia, USA. Worldwide Photography #36: Wichita. By marcos333 Thu, 09/15/2011 - 01:31 Worldwide Photography is a series of posts where every week we're going to show a city or location around the globe bringing the coolest photography samples of it. 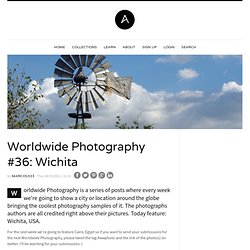 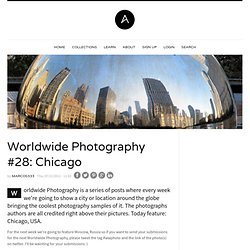 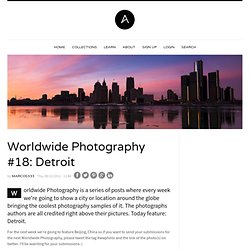 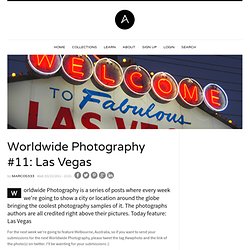 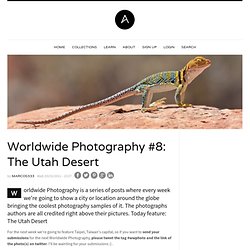 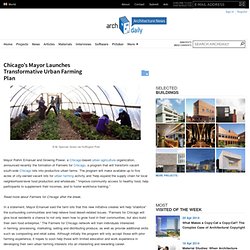 The program will make available up to five acres of city-owned vacant lots for urban farming activity and “help expand the supply chain for local neighborhood-level food production and wholesale,” “improve community access to healthy food, help participants to supplement their incomes, and to foster workforce training.” Read more about Farmers for Chicago after the break. In a statement, Mayor Emanuel said the farm lots that this new initiative creates will help “stabilize” the surrounding communities and help relieve food desert-related issues. “Farmers for Chicago will give local residents a chance to not only learn how to grow food in their communities, but also build their own food enterprise.” UT Visual Arts Center / Lake. Architects: Lake|Flato Architects Location: LBJ Library, The University of Texas at Austin, Austin, TX 78705, USA Area: 30000.0 ft2 Year: 2009 Photographs: Frank Ooms, Lake|Flato Architects From the architect. 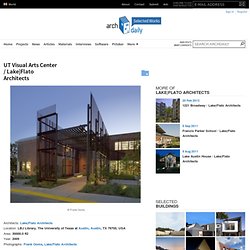 This adaptive re-use of the former Blanton Art Museum space creates a community hub for the Department of Art and Art History. To reinforce the building’s connection to the adjacent performing arts campus, a new entrance was created on the east side of the building (from an existing loading dock, and establishing a shady front door to the building. The new entry and renovated spaces incorporate unique learning spaces and specialization opportunities. Googie Architecture - Part 1.

Raimund Abraham’s Final Work / Photographer Thomas Mayer. Raimund Abraham (1933-2010), who would have turned 79 today, was far from your typical architect. 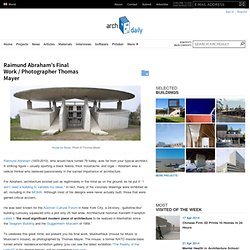 A striking figure – usually sporting a black fedora, thick moustache, and cigar – Abraham was a radical thinker who believed passionately in the sacred importance of architecture. For Abraham, architecture existed just as legitimately in the mind as on the ground; as he put it: “I don’t need a building to validate my ideas.” In fact, many of his visionary drawings were exhibited as art, including in the MOMA. Although most of his designs were never actually built, those that were gained critical acclaim. He was best known for the Austrian Cultural Forum in New York City, a 24-story, “guillotine-like” building curiously squeezed onto a plot only 25 feet wide. To celebrate this great mind, we present you his final work, Musikerhaus (House for Music or Musician’s House), as photographed by Thomas Mayer. More photos & quotes, after the break…

Infographic: The AIA History. Today, over 17,000 architects and designers, contractors and project managers, magazines and bloggers (including us) will converge on the Capital for the American Institute of Architects’ (AIA) 144th National Convention, Design Connects. 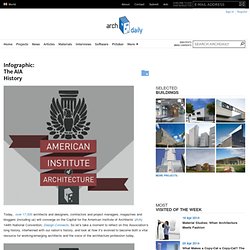 PBS lists Top Ten Buildings that Changed America. PBS has released their selections of the top ten buildings that have changed the way Americans live, work and play. From Thomas Jefferson’s 224-year-0ld Virginia State Capitol to Robert Ventui’s postmodern masterpiece the Vanna Venturi House, each building on the list will be featured in a new TV and web production coming to PBS in 2013. Continue after the break to view the top ten influential buildings and let us know your thoughts! 1) Virginia State Capitol / Thomas Jefferson (1788) Richmond, Virginia 2) Trinity Church / H.H.

Richardson (1877) Boston, Massachusetts. Finalists announced for the Menil Collection Expansion. Prior to becoming a Pritzker laureate, Italian architect Renzo Piano was commissioned to design the Menil Collection in a quiet inner-city neighborhood of Houston, Texas. Since celebrating its opening in 1987, the museum has expanded, adding Renzo’s second commission, the Cy Twombly Gallery (1995), along with the permanent, site-specific installation at Richmond Hall by minimalist sculptor Dan Flavin and the Byzantine Fresco Chapel (1997-2012) by owner Dominique de Menil.

So the important role architecture can play, and that space plays within that architecture, is to encourage an interaction between people, between people and the ideas being presented in the paintings and sculpture, and most importantly between people themselves.” The Modern Art Museum of Fort Worth exemplifies the work of Japanese architect Tadao Ando through it’s simple geometry, incorporation of the natural environment, and very minimal material selections. The New World Trade Center / Piranha NYC. A Plea For Modernism. Steven Holl Architects. GREG LYNN FORM.

Architecture City Guide: Austin. Lake Austin Residence / Lake. The Colorado River, which dissects the city of Austin, is a precious resource that this house very much embraces. Located on a long narrow river side lot, the house is conceived as a “floating fishing village” on the edge of a man made canal, where a collection of small gabled buildings and boardwalks mask the line between land and water. International Retreat / Weiss/Manfredi. Weiss/Manfredi. Leftish.net. OPPENHEIM. Thomas Phifer and Partners. North Carolina Museum of Art / Thomas Phifer and Partners. Iseami House / Robles Arquitectos. Nicolai Ouroussoff. MASS DESIGN GROUP / WELCOME. OBRA ARCHITECTS. MOS Architects.