The Clean Lines Of Brasília’s Architecture – iGNANT.de. Brasília, the federal capital of Brazil, is known for its unique urban planning and modern architecture by the likes of Lúcio Costa and Oscar Niemeyer. 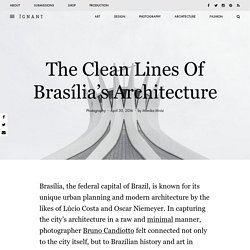 In capturing the city’s architecture in a raw and minimal manner, photographer Bruno Candiotto felt connected not only to the city itself, but to Brazilian history and art in general. “In Brasília I found a silence within me.” Planned from scratch as an ideal city, Brasília struck Candiotto with its utopian character. “It sparked something absolutely unusual in me; I felt optimistic and patriotic,” says the photographer. Despite the reality of the city today being far from its initial plans, it still made Candiotto feel connected to the different kinds of artistic manifestations in Brazil. Whilst exploring African-Brazilian and indigenous art, as well as “anonymous” artistic expressions from all over the country, the photographer became convinced that Brazilian art in Brasília crosses barriers and represents a plethora of diversity. Vila Taguai / Cristina Xavier Arquitetura. 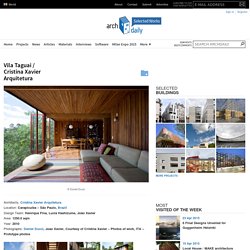 The residential project comprising eight wooden houses at Vila Taguaí, located 22 km from the centre of São Paulo, is a property development that was conceived as an innovative alternative, building new living spaces amongst the greenery of the city’s suburbs. The site is placed among dense vegetation on an East facing, 35% slope and the implantation sought to maintain the natural terrain to the greatest extent possible. Rua Goncalo de Carvalho: la strada più bella del mondo. Viviamo in un tempo dove tutto accade così in fretta. 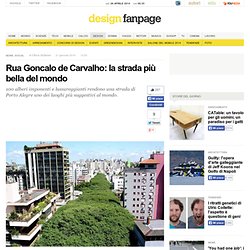 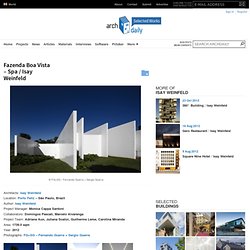 Fazenda Boa Vista is a residential and hospitality complex located in a 750-hectare property in Porto Feliz, 100km away from the city of São Paulo, in Brazil. The Spa is a low-rise construction whose build-out follows the land contours and the boundaries of the adjacent woodland. São Paulo: 5 Grandes Construções. An Architect’s Journey to Brazil. When I was student in New York City, I would often spend hours thumbing through the titles of books at the Strand Bookstore. 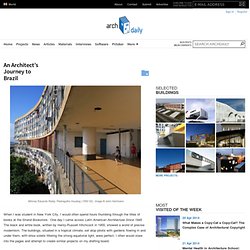 One day I came across Latin American Architecture Since 1945. The black and white book, written by Henry-Russell Hitchcock in 1955, showed a world of precise modernism. The buildings, situated in a tropical climate, set atop pilotis with gardens flowing in and under them, with brise soleils filtering the strong equatorial light, were perfect. I often would stare into the pages and attempt to create similar projects on my drafting board. Fifteen years later, on a journey to Brazil, I sought out the projects that were indelibly written into my memory.

Photography. Architecture. Houses. Cities. Ananda Clinic / Forma-i. Announcing ArchDaily Brasil. Dear readers, Since the day we started ArchDaily back in 2008, we have stuck to our mission to become a hub of opportunities for architects, and to improve the profession by making architectural knowledge available to architects around the world. 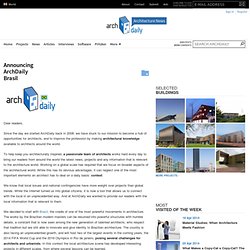 To help keep you architecturally inspired, a passionate team of architects works hard every day to bring our readers from around the world the latest news, projects and any information that is relevant to the architecture world. Working on a global scale has required that we focus on broader aspects of the architectural world. While this has its obvious advantages, it can neglect one of the most important elements an architect has to deal on a daily basis: context. We know that local issues and national contingencies have more weight over projects than global trends. We decided to start with Brazil, the cradle of one of the most powerful movements in architecture. And stay tuned for more exciting news from ArchDaily. Obrigado! FGMF. Solange Fabião.