Copy New Appointments to Another Calendar using VBA. Diane: Thank you so much for your efforts on this! 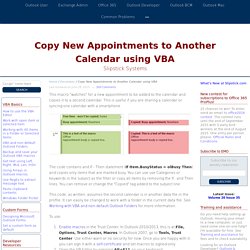 I think your page was one of the first search results I found that was thorough and got me 99% of the way there. Here is my code I am happy with and testing for myself before sharing with co-workers. I modified it to handle deleting appointments using BeforeItemMove as well as putting a warning message about the GUIDs to help keep things in sync. That meant adjusting the method of checking strbody's value, but it is still pretty simple. You'll notice I left a few of my debugging MsgBox lines in there, but they are commented out. Dana Dim WithEvents curCalendar As Outlook.Folder Dim WithEvents curCalendarItems As Outlook.Items Dim newCalFolder As Outlook.Folder Dim WithEvents objDelFolder As Outlook.Folder Private Sub Application_Startup() Dim NS As Outlook.NameSpace Set NS = Application.GetNamespace("MAPI") 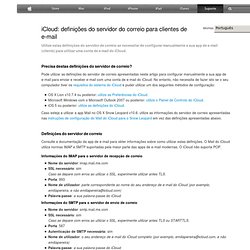 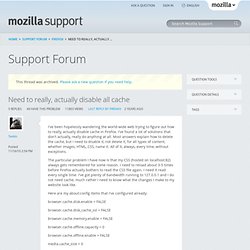 I've found a lot of solutions that don't actually, really do anything at all. Most answers explain how to delete the cache, but I need to disable it, not delete it, for all types of content, whether images, HTML, CSS, name it. All of it, always, every time, without exceptions. The particular problem I have now is that my CSS (hosted on localhost:82) always gets remembered for some reason. Mp3skull.com - Free Mp3 Download. 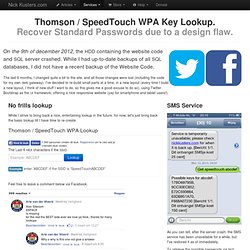 While I had up-to-date backups of all SQL databases, I did not have a recent backup of the Website Code. The last 6 months, I changed quite a bit to the site, and all those changes were lost (including the code for my own SMS gateway).

Windows. Google Public DNS Speed up the web. Google Done it again, now google announced a Google Public DNS on Google’s blog, will offer you an alternative way to connect to Web sites. With this move, anyone would be able to set up a browser to access Google’s public DNS server, rather than using an Internet Service Provider or corporate DNS server. Google says the goal of its own DNS is to help the tens of thousands of DNS resolvers improve their services, ultimately making the web faster for everyone. But if your ISP already provides the service, why is there a need for a Google one and why should you use it? 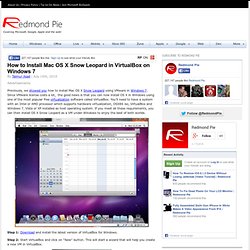 Since VMware license costs a lot, the good news is that you can now install OS X in Windows using one of the most popular free virtualization software called VirtualBox. You’ll need to have a system with an Intel or AMD processor which supports hardware virtualization, OSX86 iso, VirtualBox and Windows 7, Vista or XP installed as host operating system. If you meet all these requirements, you can then install OS X Snow Leopard as a VM under Windows to enjoy the best of both worlds. Step 1: Download and install the latest version of VirtualBox for Windows.

Step 2: Start VirtualBox and click on “New” button. Step 3: Name your VM “OSX” and select “Mac OS X” from Operating System dropdown menu, and “Mac OS X Server” from Version dropdown menu. How to Dual Boot Mac OS X and Windows 7 – A Complete Walkthrough. Everything you need to run your business… from your iPad. This week, TIME Magazine editor-at-large Harry McCracken interviewed himself as a follow-up to his piece on how he had been using his iPad as his primary computer. 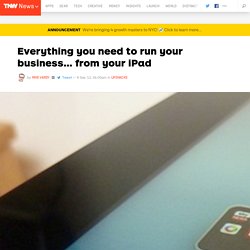 During the interview he mentions that he still uses his iPad a lot – so much so that it is still his favourite computer. Yes, he’s a journalist. But he points out that others have taken up the charge of becoming “big time” iPad users: Releaselog. 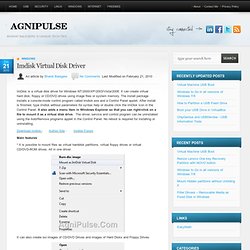 It can create virtual hard disk, floppy or CD/DVD drives using image files or system memory. The install package installs a console-mode control program called imdisk.exe and a Control Panel applet. After install is finished, type imdisk without parameters for syntax help or double click the ImDisk icon in the Control Panel.

[GUIDE] Using ImDisk to set up RAM disk(s) in Windows with no limit on disk size. Ever since I have 8GB of RAM (yes, hi, I'm late to the party... 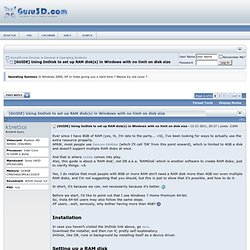 =b), I've been looking for ways to actually use the extra resource properly. AFAIK, most people use Dataram RAMDisk (which I'll call 'DR' from this point onward), which is limited to 4GB a disk and doesn't support multiple RAM disks at once. And that is where ImDisk comes into play. Also, this guide is about a 'RAM disk', not DR a.k.a.

FilesTube - Search & Download Files. Downloads - padp - PortableApps development projects. Use the Profile Manager to create and remove Firefox profiles. Firefox saves your personal information such as bookmarks, passwords, and user preferences in a set of files called your profile, which is stored in a separate location from the Firefox program files. You can have multiple Firefox profiles, each containing a separate set of user information. The Profile Manager allows you to create, remove, rename, and switch profiles. Note: You normally don't need to create a new Firefox profile unless you are troubleshooting a specific problem with Firefox. Note:The Reset Firefox feature can fix many issues by restoring Firefox to its factory default state while saving your essential information.