Gun Control and Mass Shootings in the U.S. Mass shooters, although almost always male, in many other ways grimly echo the diversity of American life. 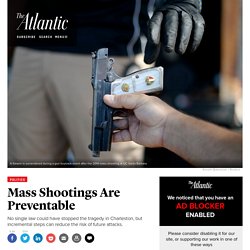 Dylann Roof in Charleston is white. Elliott Rodgers at UC-Santa Barbara was of mixed English-Chinese origins. Major Nidal Malik Hasan of Fort Hood is of Palestinian descent. Aaron Alexis, who killed at the Washington Navy Yard, was black. Their belief systems are distinctive too, sometimes right, sometimes left, sometimes religious, sometimes secular. Despite their differences, however, these mass killers shared one quality with each other and with every other American besides: easy access to deadly weapons. Gun massacres are regularly followed by another uniquely American ritual: a cacophony of voices exonerating American gun laws for American gun violence. There is of course no “one law” that would prevent all gun massacres, any more than there is “one law” that would eliminate all house fires, all fatal car crashes, or all smoking deaths. It’s true that “no one thing” did it.

Battleground America. Just after seven-thirty on the morning of February 27th, a seventeen-year-old boy named T. 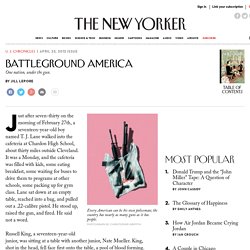 J. Lane walked into the cafeteria at Chardon High School, about thirty miles outside Cleveland. It was a Monday, and the cafeteria was filled with kids, some eating breakfast, some waiting for buses to drive them to programs at other schools, some packing up for gym class. Lane sat down at an empty table, reached into a bag, and pulled out a .22-calibre pistol. He stood up, raised the gun, and fired. Russell King, a seventeen-year-old junior, was sitting at a table with another junior, Nate Mueller. Ever since the shootings at Columbine High School, in a Denver suburb, in 1999, American schools have been preparing for gunmen. At Chardon High School, kids ran through the halls screaming “Lockdown!”

Libertarian Party. Why Libertarians Support Equal Rights for America's Gun Owners Libertarians, like other Americans, want to be able to walk city streets safely and be secure in their homes. 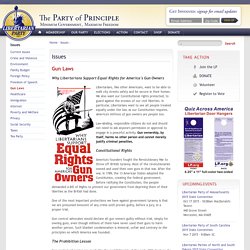 We also want our Constitutional rights protected, to guard against the erosion of our civil liberties. In particular, Libertarians want to see all people treated equally under the law, as our Constitution requires. America's millions of gun owners are people too. Law-abiding, responsible citizens do not and should not need to ask anyone's permission or approval to engage in a peaceful activity. Constitutional Rights America's founders fought the Revolutionary War to throw off British tyranny. One of the most important protections we have against government tyranny is that we are presumed innocent of any crime until proven guilty, before a jury, in a proper trial. The Prohibition Lesson Gun control advocates are much like the prohibitionists of the early 20th Century. The Right of Self Defense Personal Responsibility. The impact of gun control and gun ownership levels on violence rates.

The Second Amendment, Firearm Safety, Banning Machine Guns, Hunting Rights, Assault Weapons and the History of Gun Ownership Laws. The early explorers and settlers of the United States took full advantage of the abundant game to be found in the new lands they were beginning to inhabit. 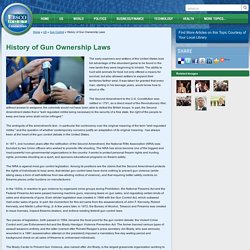 The ability to hunt wild animals for food not only offered a means for survival, but also allowed settlers to expand their territories farther west. It was taken for granted that every man, starting in his teenage years, would know how to shoot a rifle. The Second Amendment to the U.S. Constitution was ratified in 1791, as a direct result of the Revolutionary War; without access to weapons, the colonists would not have been able to defeat the British troops. In part, the Second Amendment states that a "well regulated militia being necessary to the security of a free state, the right of the people to keep and bear arms shall not be infringed.

" In 1871, one hundred years after the ratification of the Second Amendment, the National Rifle Association (NRA) was founded by two Union officers who wished to promote rifle shooting. More Guns, Less Crime: Understanding Crime and Gun Control Laws, Third Edition - John R. Lott. The Changing Politics of Gun Control. Firearms: Ownership, laws & and the case for community mobilization. Abstract The United States (U.S.) currently ranks number one in the world in both the quantity of privately owned guns and the rate of private gun ownership. 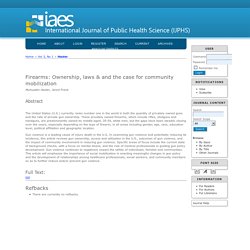