24 Things You Could Do Instead Of Telling A Woman What To Wear. Themuse.jezebel. Teens Protested Their High School's Sexist Prom Dress Code And Won. Uniqlo launching new modest line featuring hijabs and abayas. Japanese apparel retailer Uniqlo will debut a line of modest-wear in Canada in February, including hijabs and abayas, the long black dress worn by women in Saudi Arabia, and pieces inspired by the baju kurung, a tunic-and-pants outfit worn widely in South East Asia. 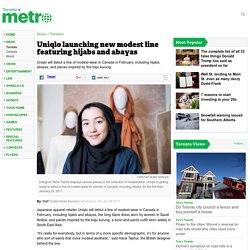 “It’s really for everybody, but in terms of a more specific demographic, it’s for anyone who sort of wants that more modest aesthetic,” said Hana Tajima, the British designer behind the line. The collection, for spring and summer 2017, will land at Uniqlo’s two Canadian stores, at Toronto’s Eaton Centre and Yorkdale Mall, on Feb. 24. 'Fat yoga': Ottawa woman wants to create safe space for bigger bodies. Mélanie Jubinville-Stafford, a yoga teacher-in-training, plans to make space for people who are craving a serving of body positivity with their yoga classes. 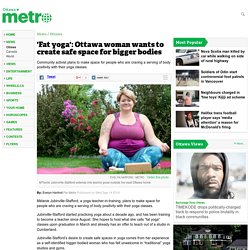 Jubinville-Stafford started practicing yoga about a decade ago, and has been training to become a teacher since August. She hopes to host what she calls “fat yoga” classes upon graduation in March and already has an offer to teach out of a studio in Cumberland. 11 Charts For When You Feel Bad About Your Body. This Woman Fights Gender Stereotypes With Hilarious Cartoons. » French businessman ‘to pay all burqa (niqab) fines’ Rachid Nekkaz has set up a million euro fund to pay fines for women who choose to wear the full Islamic veil in countries, like France, where it is against the law to do so in public. 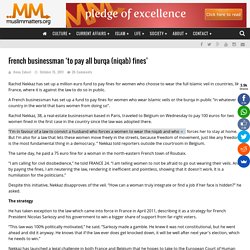 A French businessman has set up a fund to pay fines for women who wear Islamic veils or the burqa in public “in whatever country in the world that bans women from doing so”. Rachid Nekkaz, 38, a real-estate businessman based in Paris, traveled to Belgium on Wednesday to pay 100 euros for two women fined in the first case in the country since the law was adopted there. “I'm in favour of a law to convict a husband who forces a women to wear the niqab and who1 forces her to stay at home. But I'm also for a law that lets these women move freely in the streets, because freedom of movement, just like any freedom, is the most fundamental thing in a democracy, ” Nekkaz told reporters outside the courtroom in Belgium. The same day, he paid a 75 euro fine for a woman in the north-eastern French town of Roubaix. FFFWeek 2016 Showcases The Diversity Of The Body Positive Community. Full Figure Fashion Week 2016 (FFFWeek) and The Curvy Con brought curvy women from all walks of life to New York City for a week of events celebrating our curves. 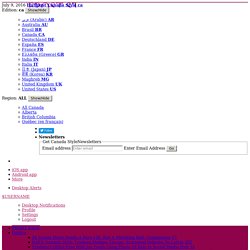 It was an incredible experience that truly highlighted the diversity of the body positive community. The women walking the runways and attending the events varied in size, race, age, identity and everything in between. They showcased their unique styles at a range of events from the "Golden Confidence" pool party to the "Curves At Sea" all white cruise, the runway presentations and more. Knowing how amazing each and every one of these women is makes it hard to imagine a world that told them that they are less than, because they may be more than.

Fortunately for us, FFFWeek and The Curvy Con exist — to celebrate our size and the beauty that makes up our community. This Indian Plus Size Blogger's Response To Instagram Removing Her Swimsuit Posts Is PERFECT. 6 Ways I Was Taught to Be a Good Fatty (And Why I Stopped) 9 Reasons Not To Shave Your Legs This Spring (Or Ever, If You'd Just Rather Not) How I Use Tinder - Made My Stomach the Profile Pic. I went with the first bio that came to mind. 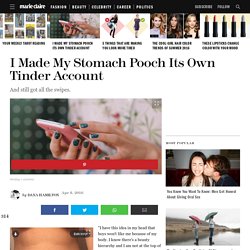 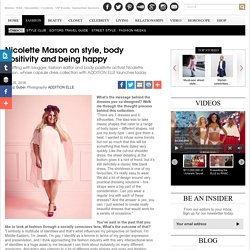 Walk me through the thought process behind this collection. "There are 7 dresses and 6 silhouettes. The idea was to take classic shapes that cater to a range of body types – different shapes, not just my body type – and give them a twist. I wanted to infuse some trends, but not so much that this will be something that feels dated very quickly. Like the cut-out shoulder dress: the sheer detailing at the bottom gives it a hint of trend, but it’s still definitely a classic little black dress. My Curves Have No Bounds: Fashion's In-Betweener Gap. Jessica Biffi, Blogger, Fashion Designer, Project Runway Canada Finalist -- What is your earliest memory of having a negative body image or self-conscious thought? 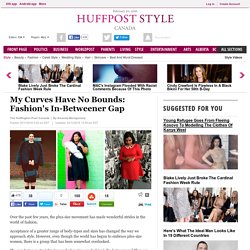 I've always been heavier, even as a child. There were always comments made about my weight from family, from as young as three or four years of age. On Ashley Graham And Sports Illustrated's Idea Of "Progress"  Last weekend I watched the 2016 Sports Illustrated Swimsuit Issue TV Special. 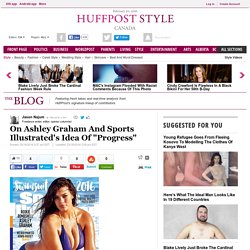 With no volume. Alone in a bar. If you're ever gonna be alone in a bar on a Saturday night trying to get some work done and have the Sports Illustrated Swimsuit Issue TV Special begin playing on three overhead televisions, no volume is the way to go. Good looking hosts relentlessly smiling, blindingly beautiful women parading around in sparkly dresses as photos of them in the concluding stages of undress flash across the screen. I Won't Be Renewing My 'Vogue' Subscription - I'm Not Inspired by Images That Don't Represent the Beauty of Diversity

My Vogue subscription ended in September, and I won't be renewing. 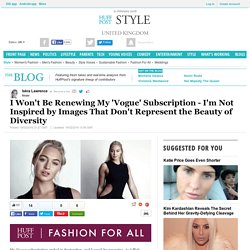 As I flick through pages of sensationalised campaigns, all I see is what I saw the month before or the month before that. I'm not inspired by images that don't represent the beauty of diversity. I wish I could fall in love with these beautiful artistic editorials but I can't relate to the images. Even though I'm a successful model, my size (UK 12-14) is still not accepted by the majority of the fashion industry.

Fattitude Trailer. Our Imaginary Weight Problem. ACCORDING to the United States government, nearly 7 out of 10 American adults weigh too much. 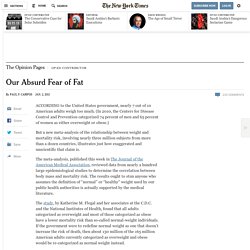 (In 2010, the Centers for Disease Control and Prevention categorized 74 percent of men and 65 percent of women as either overweight or obese.) But a new meta-analysis of the relationship between weight and mortality risk, involving nearly three million subjects from more than a dozen countries, illustrates just how exaggerated and unscientific that claim is. The meta-analysis, published this week in The Journal of the American Medical Association, reviewed data from nearly a hundred large epidemiological studies to determine the correlation between body mass and mortality risk.

The results ought to stun anyone who assumes the definition of “normal” or “healthy” weight used by our public health authorities is actually supported by the medical literature. The study, by Katherine M. Photo. What If Body Acceptance Doesn't Work? How About Body Neutrality? I see a life coach. The funny thing is, I call her my life coach when I’m doing well. 50 Body Acceptance New Year Resolutions (That Don't Involve Dieting!)

Originally published on Ravishly and republished here with their permission. To be honest, I’ve yet to solidify a New Year’s tradition that feels good deep in my bones. For most of my life, the holiday was spent at my parents’ house in New England, eating take-out Chinese food and snackable treats, playing board games to pass the time, and then going wild with noisemakers and confetti poppers at midnight. There’s something to be said about that kind of a relatively calm affair. Last year, having had a god-awful 2014 filled to the brim with too much constant change and not enough self-worth, I spent the night alone, cooking mango fried rice, drinking a bottle of sparkling cider, reading poetry, and journaling. I went to bed at 10 o’clock. Selling Shame: 40 Outrageous Vintage Ads Any Woman Would Find Offensive.

One vintage ad warns women, “Don’t let them call you SKINNY!” While another promises that smoking cigarettes will keep one slender. If the task of morphing their bodies into the current desirable shape isn’t enough of a burden, women are also reminded that they stink. In these vintage ads, a woman may be emitting a foul odor from any body part—her armpits, her mouth, her hair, her hands, her lady parts—but she never knows it until her husband is walking out the door, suitcase in hand. And what about her skin? According to such ads, she might drive that man away with her so-called coarse pores, old mouth, tan lines, zits, wrinkles, middle-age skin, hairy legs or lip, visible veins, or horror of all horrors, dishpan hands. Being Naturally Skinny Doesn't Make My Body Any Less "Real"  A little while ago, a friend/coworker and I were talking about Emma Stone. Can We Just, Like, Get Over the Way Women Talk? Like, have you ever noticed that women apologize too much?

Here's What Our Obsession with 'Plus Size' Really Says About Us. Nine Steps to Be Ready to Wear Sleeveless Shirts or Shorts Next Summer. Bitchy Resting Face and female niceness: Why do women have to smile more than men? Photos courtesy of Thinkstock. This Is What Plus-Size Clothes Look Like On Plus-Size Women. Showing girls that 'Strong is the New Pretty' Leaving Facebook... When Your Mother Says She's Fat. Originally appeared on The Daily Life. Slut Shaming and Concern Trolling in Geek Culture. Going Topless In Public In NYC - The Outdoor Co-ed Topless Pulp Fiction Appreciation Society. Bubbly Rebel Wilson Covers New "Glamour" Magazine. "It Sucks Being Pretty," Explains Reality TV's Samantha Brick. Pop Stars Celebrate Women's Rights in Stilettos and Leather Underwear. I'm Sick Of Men Telling Women To Feel Better About Their Bodies. Janna Payne wants to know what often well-meaning compliments from men say about the politics of body image.

How 'Slut Shaming' Has Been Written Into School Dress Codes Across The Country. H&M Uses Plus-Size Model For Swimwear Campaign Photos. H&M Whittles Down Acceptable Body Types To Exactly One. Sexual Objectification, Part 1: What is it? Can fashion magazines #KeepItReal? Unshaven Mavens. Lisa Bloom: How to Talk to Little Girls. Please Don't Tell My Girls They're Pretty.