Autistic, Allistic, Neurodiverse, and Neurotypical: Say what? Coming into the neurodiversity movement, there are some terms that a new person might not be familiar with. 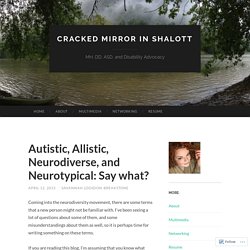 I’ve been seeing a lot of questions about some of them, and some misunderstandings about them as well, so it is perhaps time for writing something on these terms. If you are reading this blog, I’m assuming that you know what Autistic means in a general way. Some of you might still hold some misconceptions about autistic life, but I believe that to be a part of the learning process. You are reading Autistic voices either here or on the blogs of other Autistics, hopefully learning from it, and that is what matters. You’ll notice that I use “autistic” rather than “person with autism” throughout. There are many brilliant writers who have addressed Autistic vs person first language in more depth.

Let's Talk About How Bell Fired Me After I Asked For Mental-Health Leave - CANADALAND. Today, a giant Canadian company is doing a wonderful thing for mental health awareness. 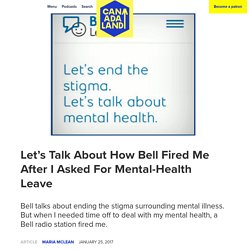 The hashtag #BellLetsTalk will be used a record-setting number of times and will raise a record-setting amount of money. Tomorrow, praise will rain down on Bell for their record-setting generosity, and all I’ll be able to think about is how Bell responded to my mental health needs when they were my employer. They fired me. Since the New Year, something in me was off, I wasn’t myself. I was depressed, and to me it didn’t make sense, at all. On Jan. 12 in the white-walled office of a worried physician, I let it all out.

Driving to his office that morning, I can remember the strong grip I had on the steering wheel, willing tears not to swell up my eyes just yet. The drive back to my own office, at K93, a Bell-owned radio station in Grand Falls, N.B., was totally different. What to Know About Taking Medication for a Mental Illness. Editor’s note: This piece is based on the experience of individuals, and shouldn’t be taken as medical advice. 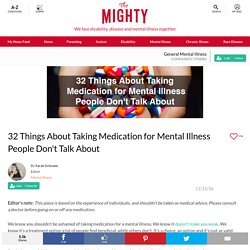 Please consult a doctor before going on or off any medication. We know you shouldn’t be ashamed of taking medication for a mental illness. 7 Phrases You May Not Think Are Fat Shaming – But Definitely Are.

The Perfect Thing My Doctor Said About My Life With Chronic Illness. My doctor sat at his desk facing his computer as he read through my chart and got updated on the various specialists I’d seen and the tests I’d had done since my last appointment with him. 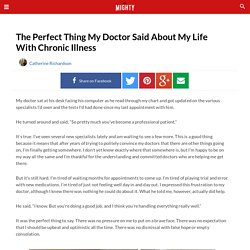 7 Reasons to Stop Calling Disabled People Inspirational. If there is one overused adjective to describe disabled people, it’s inspirational. 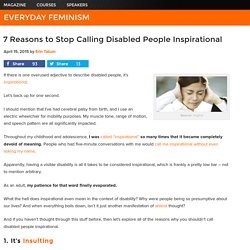 Let’s back up for one second. I should mention that I’ve had cerebral palsy from birth, and I use an electric wheelchair for mobility purposes. My muscle tone, range of motion, and speech pattern are all significantly impacted. Throughout my childhood and adolescence, I was called “inspirational” so many times that it became completely devoid of meaning. People who had five-minute conversations with me would call me inspirational without even asking my name. Apparently, having a visible disability is all it takes to be considered inspirational, which is frankly a pretty low bar – not to mention arbitrary. As an adult, my patience for that word finally evaporated. What the hell does inspirational even mean in the context of disability? And if you haven’t thought through this stuff before, then let’s explore all of the reasons why you shouldn’t call disabled people inspirational. 1. Please stop. 2. 3. 4. 5. 6. Women's Rights are not up for debate! Petition on M-312.

Posted: Friday, 20 April 2012 On April 26, Members of Parliament will begin debating Motion M-312, which calls for a Parliamentary Committee to examine whether the Criminal Code definition of "human being" should be expanded to include fetuses. 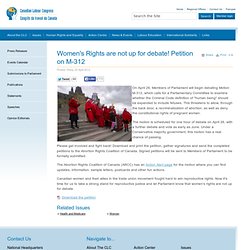 This threatens to allow, through the back door, a recriminalization of abortion, as well as deny the constitutional rights of pregnant women. The motion is scheduled for one hour of debate on April 26, with a further debate and vote as early as June. Under a Conservative majority government, this motion has a real chance of passing. Please get involved and fight back!

The Abortion Rights Coalition of Canada (ARCC) has an Action Alert page for the motion where you can find updates, information, sample letters, postcards and other fun actions. Canadian women and their allies in the trade union movement fought hard to win reproductive rights. Download the petition. You Can’t Flee From What’s Inside Your Head. Posted by Marc van Gurp | 18-04-2012 20:20 | Category: Health, Social aid This is a new campaign from Denmark, initiated by the Region Sjælland. 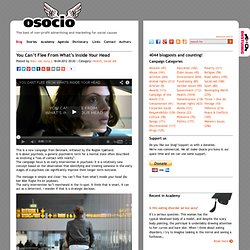 It is about psychosis, a generic psychiatric term for a mental state often described as involving a “loss of contact with reality”. The campaign focus is on early intervention in psychosis. It is a relatively new concept based on the observation that identifying and treating someone in the early stages of a psychosis can significantly improve their longer term outcome. The “R” Word. Posted by Tom Megginson | 25-05-2011 18:24 | Category: Human rights When most other derogatory terms for people’s ethnicity, religion and sexuality have been banished from appropriate conversational English, the word “retarded” is still regularly heard as a synonym for “stupid” or “messed up”. 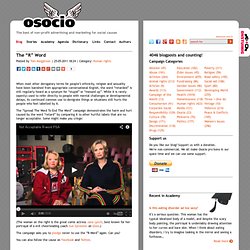 While it is rarely (openly) used to refer directly to people with mental challenges or developmental delays, its continued common use to denigrate things or situations still hurts the people who feel labelled by it. The “Spread The Word To End The Word” campaign demonstrates the harm and hurt caused by the word “retard” by comparing it to other hurtful labels that are no longer acceptable. Some might make you cringe: (The woman on the right is the great comic actress Jane Lynch, best known for her portrayal of a evil cheerleading coach Sue Sylvester on Glee.) The campaign asks you to pledge never to use the “R-Word” again.