Diverse potrayal of children's literature for people with disabilities.

How to Reach the Dormant Readers. Can Books Compete with VR? 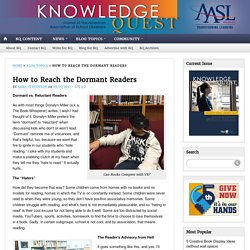 Dormant vs. Reluctant Readers As with most things Donalyn Miller (a.k.a. Getting Personal with Books. How do we encourage teens to come back to reading for fun? 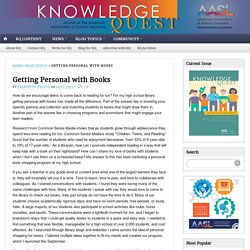 For my high school library, getting personal with books has made all the difference. Part of the answer lies in knowing your specific patrons and collection and matching students to books that might draw them in. Another part of the answer lies in choosing programs and promotions that might engage your teen readers. Research from Common Sense Media shows that as students grow through adolescence they spend less time reading for fun. Are these the best 100 children's books ever written? To celebrate Children's Book Week, which runs throughout the UK until Friday 11 October, the reading charity Booktrust has drawn up its "definitive list" of the 100 best books to read "before you're 14". 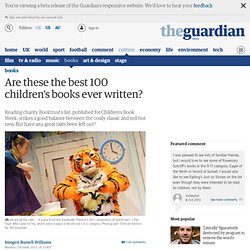 The list falls into four age groups – 0-5 years, 6-8 years, 9-11 years, and 12-14 years – and 25 titles have been voted into each. Life, Animated – Stories of Autism. One Place for Special Needs. NCLD - National Center for Learning Disabilities. NCLD - National Center for Learning Disabilities. The Learning Styles of Children with ASD. By Bethany McCabe, MS, OTR/L Both children on the autism spectrum and their neurotypical peers learn best when they are exposed to various learning styles and teaching methods. 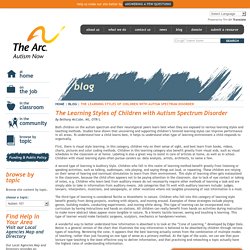 Studies have shown that uncovering and supporting children’s favored learning styles can improve performance in all areas. To understand how a child learns best, it helps to understand what type of learning environment a child responds to organically. First, there is visual style learning. In this category, children rely on their sense of sight, and best learn from books, videos, charts, pictures and color coding methods. A second type of learning is Auditory Style. The third type of learning is considered Tactile or Kinesthetic in nature. Libraries and Autism: We're Connected. Learning Disorder Simulations - See how they feel. Autism - simulation - walk in their shoes. Visually Impaired - simulation- walk in their shoes. A Day in the Life of Someone who is Deaf, Part 2. A Day in the Life of Deaf Culture-Part 1. Famous People with Learning Disabilities. Blind Student - Ben Underwood is amazing!

Metaphase and the Down’s syndrome superhero. A little while back, ImagineFX magazine contacted me asking for a feature about ‘unlikely’ superheroes. 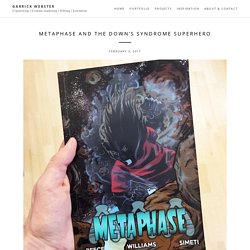 Of course, I said ‘yes’ straight away – I love comics and I love ‘unlikely’ – and you’ll be able to read my piece in issue 146, on sale 24 February 2017 in the UK. As the brief talked about LGBTQ+ and plus-size superheroes, I straight away wondered whether there are any disabled superheroes out there, and any with Down’s syndrome (DS). My son Teddy has DS so it’s close to my heart. Very quickly, I discovered Metaphase, a graphic novel put together by Chip Reece and Kelly Williams, and published with some Kickstarter help by Alterna Comics. Diversity in Disney Films: Critical Essays on Race, Ethnicity Gender Sexuality and Disability. Deaf West artistic director David Kurs: Why deaf actors should be cast to play deaf characters. 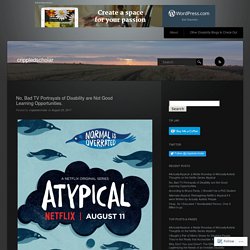 The Main cast is lined up on the bottom of the screen Casey (Brigette Lundy-Paine), then only the top of Sam’s (Keir Gilchrist), Doug (Michael Rapaport), and Elsa (Jennifer Jason Leigh) a cartoon thought bubble surrounded by penguins is coming out of Sam’s head featuring the show title and release date (Aug. 11) Disability in film: is cinema finally moving with the times? This year's Paralympics in London did an extraordinary amount to change attitudes to disabled people. 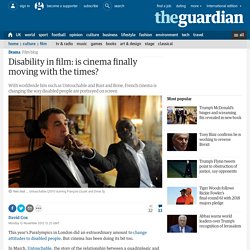 But cinema has been doing its bit too. In March, Untouchable, the story of the relationship between a quadriplegic and his carer, became the highest-grossing film ever in a language other than English. It's now taken nearly £250m on a production budget of £7m, topping the box office charts in countries ranging from Switzerland and Spain to Germany and South Korea. It has also been selected as the French entry for the foreign-language Oscar. A hot competitor for that honour was Rust and Bone, in which Marion Cotillard plays a double amputee. The point about these films is not that they feature disabled protagonists, but the way the films treat the characters. "Beautiful Mind" John Nash's Schizophrenia "Disappeared" as He Aged. Mathematician John Nash, who died May 23 in a car accident, was known for his decades-long battle with schizophrenia—a struggle famously depicted in the 2001 Oscar-winning film "A Beautiful Mind. 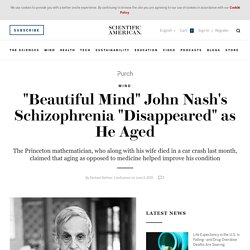 " Nash had apparently recovered from the disease later in life, which he said was done without medication. But how often do people recover from schizophrenia, and how does such a destructive disease disappear? Nash developed symptoms of schizophrenia in the late 1950s, when he was around age 30, after he made groundbreaking contributions to the field of mathematics, including the extension of game theory, or the math of decision making. He began to exhibit bizarre behavior and experience paranoia and delusions, according to The New York Times. Diverse children's literature on disability.