Mt. Mograph. Classy Sliding Text - Adobe After Effects tutorial. Summit 76 - Rigging Shadows w/ Code - After Effects. Motionographer Adam Plouff: Building Tools for Animators. “If I’m known for anything, it’s the utilization of some of the more obscure features in After Effects and a weirdo obsession with mathematical phenomena,” explained Adam Plouff. 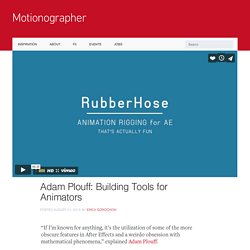 Recently, the Atlanta-based animator has been expanding his skill set beyond keyframes and diving deep into code. Last week he released RubberHose, an After Effects plugin that makes pliable character rigs a snap. I was interested in how Adam started down the tool-building path, so I asked him a few questions to find out more. How did you get started building tools for After Effects?

Since all the way back into college, I’ve had a fascination with people making art with code. Usually, about once a year, I would get the urge to dive into the Processing language for a couple of weeks. Then in the summer of 2014, Sander Van Dijk released Ouroboros. This was the point in my career where I started thinking in terms of building systems and tools rather than a one-off animations done by hand.

Motion Master. How do I make Whiteboard Write-on Effects? By Michele Yamazaki on Jan 13, 2015 at 10:34 AM Over the weekend, I was asked, “Do you know of any After Effects plug-in that automate the whiteboard drawn on effect?” 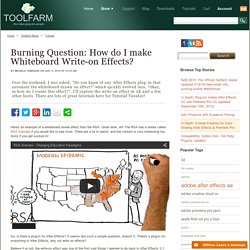 Which quickly evolved into, “Okay, so how do I create this effect?”. I’ll explore the write-on effect in AE and a few other hosts. There are lots of great tutorials here for Tutorial Tuesday! Here's an example of a whiteboard reveal effect from the RSA. So, is there a plug-in for After Effects? Believe it or not, the write-on effect was one of the first cool things I learned to do back in After Effects 3.1. Create a Write on Effect in After Effects What I've found is that the effect is not a difficult effect to achieve, but it can be very time consuming. Here's the general process that I recommended: 1. 2. 3. Method 1: You could use linear wipes to reveal the elements, layer by layer, if its very simple. 4. An even easier method would be to record yourself writing with a tablet and play that back. My own script for rigging like chains. Vango - a character rig for after effects. Using the SourceRectAtTime Expression in After Effects.

AE Self Resizing. One of the coolest parts about the integration between After Effects and Premiere is the ability to edit text templates in Premiere without having to export them out of After Effects. 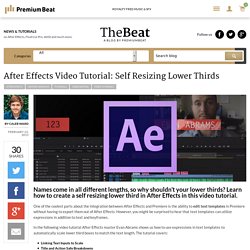 However, you might be surprised to hear that text templates can utilize expressions in addition to text and keyframes. In the following video tutorial After Effects master Evan Abrams shows us how to use expressions in text templates to automatically scale lower third boxes to match the text length. The tutorial covers: Linking Text Inputs to ScaleTitle and Action Safe BreakdownsUsing the Dynamic Link to Create AE TemplatesUsing Monospaced FontsDefining Template Compositions If you are completely unfamiliar with the text template workflow between After Effects and Premiere check out our ‘How to Create Live Text Templates’ post. You can download the project files for this After Effects template by going to Evan Abrams’ website. This video was first shared by Evan Abrams on his website ECAbrams.com. Circle Burst Assets. Make your motion graphics more dynamic with circle bursts. 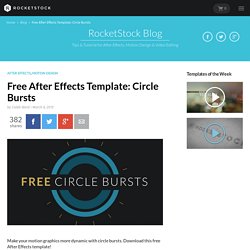 Download this free After Effects template! Flat shape layer animations are more popular then ever – we’re seeing this graphic style in everything from commercials to infographics. These simple shapes can breathe life into other wise dull projects and compositions….but creating them is time consuming. So, we’ve got a treat for you below! In addition to our premium AE templates, we’ve made it our mission to improve your motion graphics projects by giving away free After Effects templates and tools every month! CreaHandwritten "Write-on" Using Expressions. Retro Fun (FREE AE Template) Element 3D Tutorial: Fracture any Geometry into Chunks or Pieces without any help of an external 3D Application. Connect Layers - Rope, triangulation, spanning tree for After Effects. This script connects the selected layers with segments or triangles created with shape layers. 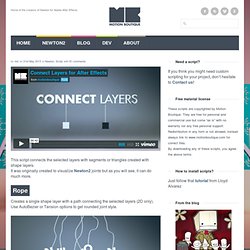 It was originally created to visualize Newton2 joints but as you will see, it can do much more. Rope Creates a single shape layer with a path connecting the selected layers (2D only). Use AutoBezier or Tension options to get rounded joint style. Spanning Tree Computes minimum spanning tree and draws each edge with a shape layer (2D and 3D support).

Triangulation Triangulates the selected layers and draws each edge with a shape layer (2D and 3D support). Note that for functions that create shape keyframes (Triangulation with Filled Triangles turned on, and Rope), keyframing is done within the comp work area. Quick start guide Compatibility: For AE CS6 or later Current version: 1.08 – Initial release – May 2013 Note: And yes, everything in the promo video has been done in After Effects CS6. After Effects Expressions - Google Books. How To Create a Fun and Dynamic Animation – Colors Part. ShareLog - Origamix - Trapcode Mir example. How to Create a Seamless Infinite White Backdrop. Organic Liquid Filling Logo Reveal. Extrude 3d Letters « Evan Abrams – Video and Graphic Design.

Make your words, letters, whatever 3d inside adobe after effects! 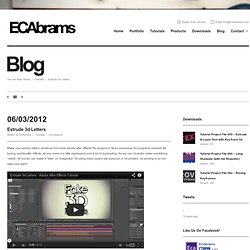 No plugins or fancy expensive 3d programs needed! All boring vanilla after effects. All you need is a little expression and a lot of duplicating. So we can’t actually make something “really” 3d but we can make it “fake” or “imaginary” 3d using many layers like plywood or 3d printers. 3d printing is so hot right now right? The expression used is: value+[0,0,index*thisComp.layer("Controls").effect("Slider")("Slider")] BUT the “thisComp.layer(“Controls”).effect(“Slider”)(“Slider”)” needs to be changed to whatever your slider control is… so use the pick whip to make it happen.

How To Create a Fun and Dynamic Animation – Shapes Part.