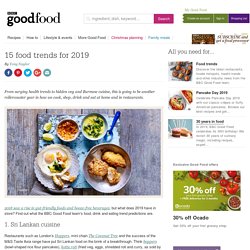 ‘Before, Sri Lankan was lumped in with Indian cuisine but now, we’re not having an “Indian” anymore. 2. Restaurant analysts are tipping Burmese food – check out London’s Lahpet and the @RangoonSisters supper club – or try our recipe for tohu jaw, Burmese fritters. 3. Britain’s attitude to meat is changing dramatically. 4. Sales of Lakeland’s kefir kit are ‘flying’ along with M&S’s kombucha. Want to get next-level? 5. Real Simple. Our Food - Impossible Foods. The 10 Most Popular Things for Teens in 2019. When it comes to what tech teens love most, it's no surprise that nearly half of the teens we surveyed said they preferred their mobile phones above all other technology. 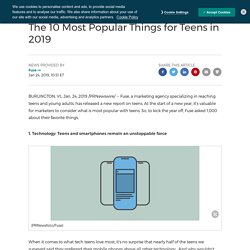 And why wouldn't they? Smartphones can connect teens to everything they care about – from socializing with their friends on messenger and social media apps to consuming all types of content and entertainment like gaming and video streaming. This news is not unexpected, since 95% of teens report that they have a smartphone or access to one. Conversely, teen interest in AR and VR technology appears stagnant, in part because no other brand has yet to replicate the success of Pokémon Go, the most popular AR release to date. 2.

Snapchat has declined in popularity as teens continue to choose Instagram's superior design and social connectivity. 3. Teens, Social Media & Technology 2018. YouTube, Instagram and Snapchat are the most popular online platforms among teens. 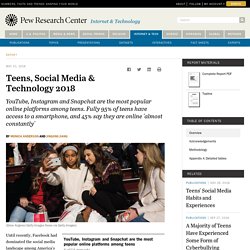 Fully 95% of teens have access to a smartphone, and 45% say they are online 'almost constantly' Until recently, Facebook had dominated the social media landscape among America’s youth – but it is no longer the most popular online platform among teens, according to a new Pew Research Center survey. Today, roughly half (51%) of U.S. teens ages 13 to 17 say they use Facebook, notably lower than the shares who use YouTube, Instagram or Snapchat. Climate change: Are you suffering from ‘eco-anxiety’? - BBC Three. Gen Z Loves TikTok. Can Fashion Brands Learn to Love It Too? NEW YORK, United States — Burberry’s Instagram campaigns tend to be pretty conventional: photos of Gigi Hadid and other It-girls adorned in the British luxury brand’s clothes, or glossy shots of the latest bag or fragrance. 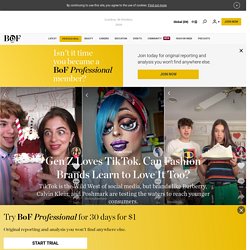 On TikTok, though, Burberry tried something different. Last week, the brand issued a “challenge” for users to post videos of themselves attempting to contort their hands in the shape of the letters “TB,” representing the updated Thomas Burberry monogram. One week, 30,000 videos and 57 million views later, Burberry has an authentic viral hit on its hands, albeit one a fair bit sillier than its usual campaigns.

One popular video of a Scottish influencer named Simmy Landa dancing while using her hands to make the monogram has nearly 10,000 likes. Fashion brands are only just starting to test the waters with TikTok, which has rocketed to the top of the app charts with over one billion downloads, according to Sensor Tower, a mobile app data firm. Gen Z is abandoning Facebook, Kik, and Skype: survey. Gen Z is most photographed generation, and it's changing how they shop. GEN Z ’s implications to a sustainable fast fashion industry. With low prices and updating styles of clothes every seasons, fast fashion brands attract people to buy more and more products. 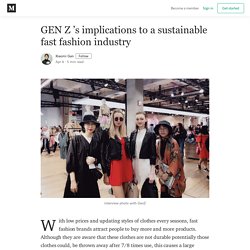 Although they are aware that these clothes are not durable potentially those clothes could, be thrown away after 7/8 times use, this causes a large amount of clothing waste every year. Research shows that greenhouse gas emissions from burning garment waste may account for a quarter of total emissions by 2050. In the face of the environmental pressure caused by the fast fashion industry, what do Generation Z think about it? As a new generation of consumers, the views of Generation Z and Millennials are very crucial. We had interviewed with Generation Z consumers in the fast fashion stores on the streets of Milan. 54% of interviewers said that they decided to buy higher quality products, and they try to know about the materials and production process.

So how fast fashion companies redeploy their strategies to adapt and guide changes in consumer perceptions? Gen Z is leading an evolution in shopping that could kill brands as we know the. Thrifting and teen thrills: photos of Russian youth’s love affair with second-hand clothes — The Calvert Journal. Vintage and second-clothes play a prominent role in discussions around sustainability in fashion. 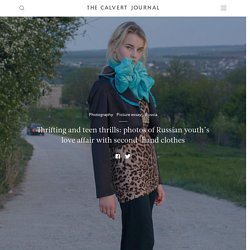 In part, this is because they are so relatable: everyone has their own outstanding thrift store finds and old garments they’ve cherished for years. The cultural significance of these wares, though, can be complex. Russia and Eastern Europe might be famous for their second-hand stores and markets, but in these countries, the trade in used clothing is not always regarded as something positive. In Soviet times, shopping for second-hand clothes was perceived as a sign of poverty. Teens' favorite clothing brands include Nike, Adidas, American Eagle.

Piper Jaffray surveyed 9,500 teens across the United States to find out how they spend their money.The report showed that, overall, teens are choosing to spend more on food than on anything else. 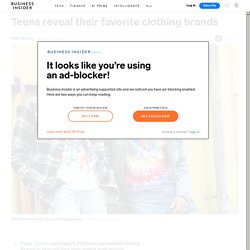