Gen Z study: What brands need to know - We Are Social UK - Global Socially-Led Creative Agency. Marketing To Teens? Influencers May Be Your Best "Only" Shot. Teens Are Abandoning Traditional Media Younger generations are abandoning traditional media at an alarming rate. 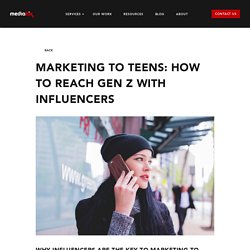 Television was once an extremely popular medium for consumers and advertisers alike, but cable subscriptions are quickly becoming a thing of the past. A recent survey reported that only 36% of consumers aged 13-24 paid for traditional TV like cable or satellite. Additionally, television is becoming a less effective channel for advertising. Only 18% of Gen Z and 25% of Millennials find that TV ads are highly influential in their buying decisions. In place of traditional TV, teens are turning to social media in droves. Three brand campaigns that successfully engaged Gen Z – Econsultancy. Today’s youth – or ‘Gen Z’ as they’re also known – can be a tough crowd. 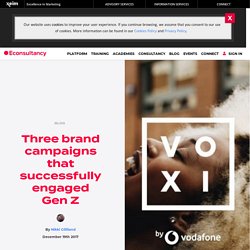 Well-informed, digitally-savvy, and particularly cynical when it comes to brand marketing – 16 to 24-year olds are an entirely new breed of consumers. Part and parcel of this is of course digital technology, with 96% of Gen Z owning a smartphone, and spending an average of three hours and 38 minutes online each day. Five Things Your Brand Needs To Know About Marketing To Teens.

Although teens can be obsessive (trust me, I know), and marketers even more so, does that mean businesses have to be ‘customer obsessed’ when marketing to teens? 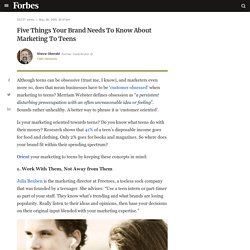 Merriam Webster defines obsession as “a persistent disturbing preoccupation with an often unreasonable idea or feeling”. Sounds rather unhealthy. Best colours to use on Instagram: The four colours that get the most likes. Over 100 million photos are uploaded to Instagram every day. 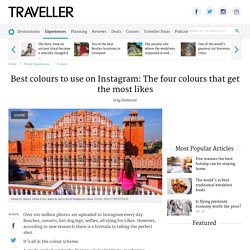 Beaches, sunsets, hot dog legs, selfies, all vying for Likes. However, according to new research there is a formula to taking the perfect shot. It's all in the colour scheme. A study carried out by the Pantone Color Institute, marketing platform Fohr and Visit Carlsbad has identified the four colours that draw the most engagement from Instagram users. To come to this conclusion they analysed the best-performing posts from 75 different influencers with a following of 50,000 or greater. The most popular colours are Rose Dawn (a dusty pink), Ethereal Blue (similar to the shade seen in open skies), Ocean Depths (a teal shade resembling the sea) and Harvest Gold (hinting of autumn shades, sandy beaches and sunsets). Photo: Pantone "Colour has always been a part of why we travel; the desire to 'see' a new place is rooted in a mental image we've already conjured.

" said Grace Murray, Vice President at Fohr. Ethereal Blue Golden Dawn. This 14-Year-Old Founder Explains How to Market to Teenagers on Social Media. You only have a few seconds to make an impression with teens on Snapchat or Instagram. 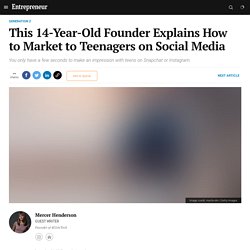 September 26, 2017 6 min read Opinions expressed by Entrepreneur contributors are their own. Everyone knows that the root of marketing is understanding your audience. Generation Z Characteristics: 5 Infographics on the Gen Z Lifestyle. Just when many companies are finally starting to understand millennials, a new generation is starting to emerge. 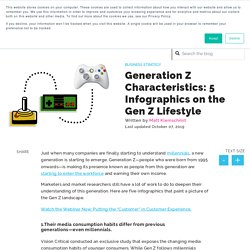 Generation Z—people who were born from 1995 onwards—is making its presence known as people from this generation are starting to enter the workforce and earning their own income. Marketers and market researchers still have a lot of work to do to deepen their understanding of this generation. Here are five infographics that paint a picture of the Gen Z landscape. Watch the Webinar Now: Putting the “Customer” in Customer Experience. 1.Their media consumption habits differ from previous generations—even millennials.

Vision Critical conducted an exclusive study that exposes the changing media consumption habits of younger consumers. Some notable stats about the Generation Z characteristics from the infographic: 2. Many studies have suggested that millennials are looking for great experiences, not great products. 3. What makes the Gen Z employee tick? 4. 5. From the infographic: Adidas ditching TV ads to reach Generation Z on mobile. Dive Brief: Adidas is ditching television ads to instead emphasize mobile-based marketing in an effort to reach the so-called Generation Z demographic, CEO Kasper Rorsted told CNBC on Wednesday.Gen Z — which roughly includes people born between 1995 and 2014 — is the first generation to be unaware of a world without the internet and mobile devices. 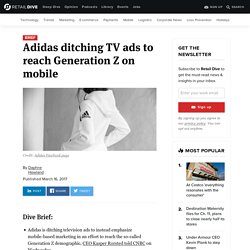 Their phones are always on, though research shows they still prefer shopping in stores, according to recent studies from IBM for the National Retail Federation and from Euclid Analytics. "It's clear that the younger consumer engages with us predominately over the mobile device," Rorsted told CNBC.Adidas last week reported revenue growth in nearly all market segments for the fourth quarter and full-year 2016, and increased its sales and earnings guidance into 2020. The German sports brand last year wrested back its number two spot in the space behind market leader Nike, leaving Under Armour behind. Dive Insight: Research backs him up. How to Market to Kids AND Parents. Effective Ways to Market to Teenagers and Their Parents : Marketing Article by Associaton of Strategic Marketing. Marketing has a certain set of common rules that apply to both online and offline strategies. 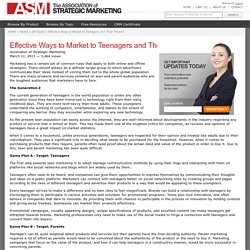 There should always be a definite target group to which advertisers communicate their ideas instead of voicing them out to the whole global population. There are many products and services centered on teen and parent audiences who are the toughest audiences that marketers have to face. The Generation Z The current generation of teenagers in the world population is unlike any other generation since they have been immersed in technology right from their early childhood days. They are more tech-savvy than most adults. As the present teen population can easily access the Internet, they are well-informed about developments in the industry regarding any product or service that is aimed at them. PEOPLE.com. Manage Push Notifications If you have opted in for our browser push notifications, and you would like to opt-out, please refer to the following instructions depending on your device and browser. 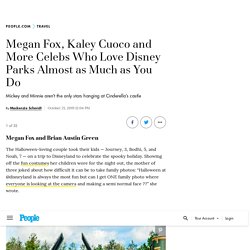 That’s the Power of Magic – You Can Fly. 4 Secrets Behind Disney's Captivating Marketing Strategy. Disney's Upfront Pitch Says Reaching Kids Is in Its DNA - Broadcasting & Cable. At kids' upfront presentations this week at Disneyland, and next month in Disney World, Disney Media Sales will be pitching data science along with marketing magic. 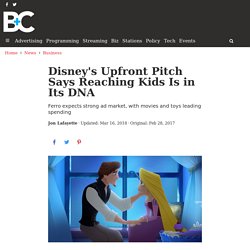 Disney: parks and resorts revenue 2008-2018. How Organic Advertising Made Disney World a Holiday Destination. Walt Disney World has always been a popular destination for kids, families and even adults who still feel a special connection with the “magic” that the destination seems to provide its guests. More recently, it’s become a holiday-season attraction, and you can chalk it all up to organic advertising. Organic advertising with a touch of magic The Disney brand is sort of an anomaly. Disney Marketing Strategy - A perspective on the happiest place on earth. There’s a reason it’s known as “The Happiest Place on Earth.” Whether you’re a six-year-old child becoming enamored with fairytales, princesses, and grand adventures for the first time, a parent experiencing these classic stories anew through the eyes of your child, or simply someone looking to re-enchant the world and re-discover the ordinary magic in our everyday lives, there is no better place for you than Walt Disney World.

As a young urban professional visiting Disney World for the first time in many years, I was excited to experience the parks and the people, the stories and the rides, and everything in between, in this different life stage. After fun-filled days spent at Animal Kingdom, Epcot, and Magic Kingdom, I left Disney World reminded of the ability of family and fun, and of good stories well-told, to bring people together and highlight the beauty of the human journey, no matter your age or culture. Disney World’s intergenerational appeal is remarkable. About the Author. JD 'Always The Leader' Summer TV AD 2018. JD Christmas TV Advert 2016 #UndisputedChristmas. JD TV AD 2017: Undisputed Christmas. Always The Leader - JD Xmas TV AD 2018.