Warm Springs. Between 1933 and 1945 the eyes of the nation often focused on Warm Springs, where U.S. president Franklin D. 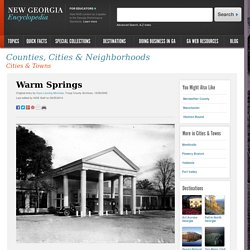 Roosevelt maintained a residence. After discovering in the fall of 1924 that the southern Meriwether County springs eased his polio symptoms, Roosevelt built a treatment center for polio victims there as well as a residence that later became known as the Little White House. He died at Warm Springs on April 12, 1945. Since then the Little White House has served as a memorial for the thirty-second president, and Warm Springs has returned to its pre-Roosevelt status as a quiet southern village. Located sixty miles south of Atlanta, Warm Springs grew up around natural springs with 88-degree (Fahrenheit) water that flows at a rate of approximately 914 gallons per minute year round. When Roosevelt became governor of New York in 1929, and particularly when he was elected president in 1932, Warm Springs entered a new era.

After Roosevelt's death the national spotlight turned elsewhere. World War I in Georgia. Georgia played a significant role during America's participation in World War I (1917-18). 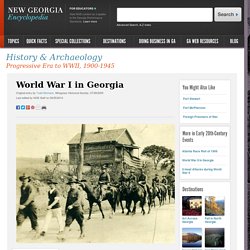 The state was home to more training camps than any other state and by the war's end had contributed more than 100,000 men and women to the war effort. Foreign Prisoners of War. During times of war, Georgia military installations have served as internment camps for enemies taken prisoner, as well as for aliens residing in the United States whose activities were viewed as suspect by the federal government. 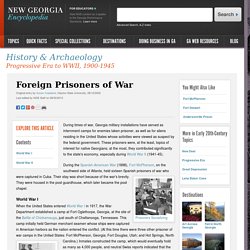 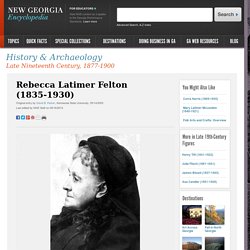 A writer and tireless campaigner for Progressive Era reforms, especially women's rights, she was the first woman to serve in the U.S. Senate. The Rise and Fall of Jim Crow . Jim Crow Stories . People . W.E.B. Du Bois. Georgia Women of Achievement. Lugenia Burns Hope is known as one of the most effective social reformers in the South. 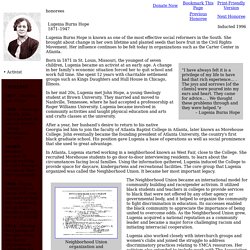 She brought about change in her own lifetime and planted seeds that bore fruit in the Civil Rights Movement. Her influence continues to be felt today in organizations such as the Carter Center in Atlanta. John Stith Pemberton (1831-1888) John Stith Pemberton was the inventor of the Coca-Cola beverage. 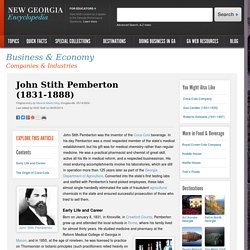 In his day Pemberton was a most respected member of the state's medical establishment, but his gift was for medical chemistry rather than regular medicine. He was a practical pharmacist and chemist of great skill, active all his life in medical reform, and a respected businessman. His most enduring accomplishments involve his laboratories, which are still in operation more than 125 years later as part of the Georgia Department of Agriculture. Converted into the state's first testing labs and staffed with Pemberton's hand-picked employees, these labs almost single-handedly eliminated the sale of fraudulent agricultural chemicals in the state and ensured successful prosecution of those who tried to sell them. 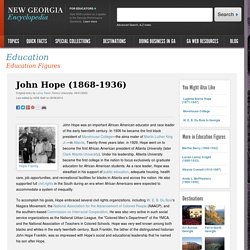 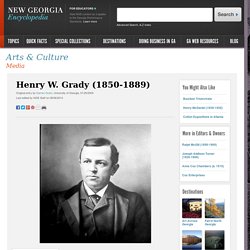 Fred L. Howe 1895 Cotton States and International Exposition Photographs, 1895. Cotton Expositions in Atlanta. In the late nineteenth century, fairs and expositions were an important way for cities to attract visitors who, in an era before radio and television, were eager to see new technological marvels on display. 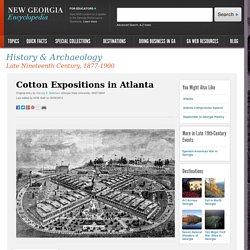 These events provided civic leaders with a showcase to lure visitors, who were urged to come and do business in the host location. In the years following the Civil War (1861-65), Atlanta's leaders hosted a series of three "cotton expositions" that were important to the city's recovery and economic development. These expositions helped Atlanta stake its claim as the center of the New South. Atlanta Compromise Speech. On September 18, 1895, the African American educator and leader Booker T. 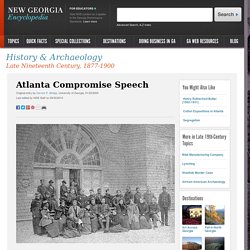 Washington delivered his famous "Atlanta Compromise" speech at the Cotton States and International Exposition in Atlanta. Considered the definitive statement of what Washington termed the "accommodationist" strategy of black response to southern racial tensions, it is widely regarded as one of the most significant speeches in American history.

Two years earlier, Washington had spoken in Atlanta during the international meeting of Christian Workers. That audience, comprising northern and southern whites, responded favorably to his speech, in which he advocated vocational-industrial education for blacks as a means of improving southern race relations. In the spring of 1895 Washington traveled to Washington, D.C., with a delegation of mostly white Georgians to solicit support from Congress for an exposition on social and economic advances in the South. Berry College - Experience it Firsthand. The Rise and Fall of Jim Crow . Jim Crow Stories . The Atlanta Riot. In 1902, a historian wrote: "There has never been a race riot in Atlanta. The white man and the negro have lived together in this city more peacefully and in better spirit than in any other city, in either the North or South. " For many whites as well as black, Atlanta seemed to be the least likely place for a race riot at the turn of the century.

Atlanta was a model city of the new South. Its economy was booming. Black figure was the aristocratic scholar Dr. Atlanta Race Riot of 1906. During the Atlanta race riot that occurred September 22-24, 1906, white mobs killed dozens of blacks, wounded scores of others, and inflicted considerable property damage. Local newspaper reports of alleged assaults by black males on white females were the catalyst for the riot, but a number of underlying causes lay behind the outbreak of mob violence. Causes of the Riot By the 1880s Atlanta had become the hub of the regional economy, and the city's overall population soared from 89,000 in 1900 to 150,000 in 1910; the black population was approximately 9,000 in 1880 and 35,000 by 1900. Such growth put pressure on municipal services, increased job competition among black and white workers, heightened class distinctions, and led the city's white leadership to respond with restrictions intended to control the daily behavior of the growing working class, with mixed success.

Alonzo Herndon (1858-1927) An African American barber and entrepreneur, Alonzo Herndon was founder and president of the Atlanta Life Insurance Company, one of the most successful black-owned insurance businesses in the nation. At the time of his death in 1927, he was also Atlanta's wealthiest black citizen, owning more property than any other African American. Admired and respected by many, he was noted for his involvement in and support of local institutions and charities devoted to advancing African American business and community life.

Early Years Born into slavery in Walton County on June 26, 1858, Alonzo Franklin Herndon grew up on a farm in Social Circle, forty miles east of Atlanta. Yazoo Land Fraud. The Yazoo land fraud was one of the most significant events in the post-Revolutionary War (1775-83) history of Georgia. The bizarre climax to a decade of frenzied speculation in the state's public lands, the Yazoo sale of 1795 did much to shape Georgia politics and to strain relations with the federal government for a generation. Georgia was too weak after the Revolution to defend its vast western land claims, called the "Yazoo lands" for the river that flowed through the westernmost part. Consequently, the legislature listened eagerly to proposals from speculators willing to pay for the right to form settlements there.

Revivals and Camp Meetings. In early-twenty-first-century Georgia, stadium-sized revival meetings featuring Billy Graham or the Promise Keepers attract tens of thousands of people. Such revivals are the modern-day descendants of early-nineteenth-century camp meetings, held on grounds around the state, and a method of evangelical preaching that gained popularity in the late eighteenth century. The tradition of revivalism in the South, and in Georgia in particular, traces its roots to what some historians call the Great Awakening. The Great Awakening, which occurred from about 1720 to 1780, was a series of revivals that sparked a move away from formal, outward, official religion to experiential, inward, personal religion. Its central figure, George Whitefield, was a traveling Anglican preacher from England who cooperated with Protestants of every sort to gain converts. From his home base in Savannah, Whitefield brought a riveting new preaching style to the colonists.

Revivalism took many forms. Unit 2: Those Inventive Americans! University Of Georgia. Amazing Student Alia Church. Eli Whitney's Patent for the Cotton Gin. Background. The Eli Whitney Museum and Workshop. Gold Rush Gallery, Inc. Dahlonega Gold History. Augusta Canal. Integration of the University of Georgia. Celebrating Courage: 50th Anniversary of Desegregation at UGA. Celebrating Courage: 50th Anniversary of Desegregation at UGA. WILLIAM FEW. WILLIAM FEWGeorgia. William Few Jr. (1748-1828) Patriot, legislator, pioneer, and financier, William Few Jr. was born in Maryland in 1748, to Mary Wheeler and William Few Sr. For some years the family lived in North Carolina, where Few's brother James was hanged for his part in the Regulator Insurrection, an uprising against what many citizens viewed as unfair taxation practices by royal government. Scene at the Signing of the Constitution.