Atomic Bombing of Hiroshima. On August 6, 1945, an American B-29 bomber named the Enola Gay, left the island of Tinian for Hiroshima, Japan. 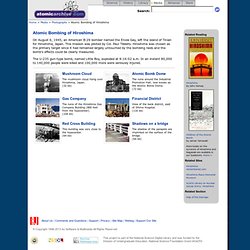 This mission was piloted by Col. Paul Tibbets. Hiroshima was chosen as the primary target since it had remained largely untouched by the bombing raids and the bomb's effects could be clearly measured. The U-235 gun-type bomb, named Little Boy, exploded at 8:16:02 a.m. In an instant 80,000 to 140,000 people were killed and 100,000 more were seriously injured. Mushroom Cloud The mushroom cloud rising over Hiroshima, Japan.(32 kb) Atomic Bomb Dome. Hiroshima: A Survivor's Story. AtomicBombMuseum.org. WW1 Poison Gas. British soldiers blinded by gas, April 1918 Gas was invented (and very successfully used) as a terror weapon meant to instill confusion and panic among the enemy prior to an offensive. 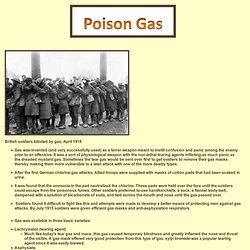 Mustard Gas in World War I" During World War I, a new style of fighting known as trench warfare pitted two armies close enough to each other that they could yell across the lines. 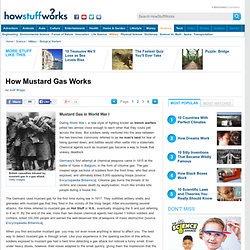 But soldiers rarely ventured into the area between the two trenches commonly referred to as no man's land for fear of being gunned down, and battles would often settle into a stalemate. Chemical agents such as mustard gas became a way to break that uneasy deadlock. The 1918 Influenza Pandemic. The Influenza Epidemic of 1918. Hard as it is to believe, the answer is true. 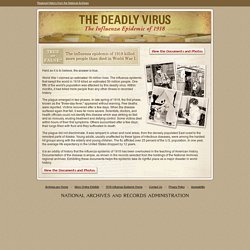 World War I claimed an estimated 16 million lives. The influenza epidemic that swept the world in 1918 killed an estimated 50 million people. WGBH American Experience . Influenza 1918 . Influenza Across America in 1918. Feature Articles - Life in the Trenches. Life in the trenches during the First World War took many forms, and varied widely from sector to sector and from front to front. 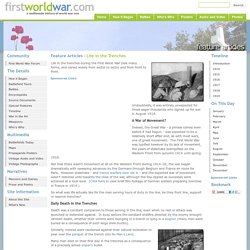 Undoubtedly, it was entirely unexpected for those eager thousands who signed up for war in August 1914. A War of Movement? Indeed, the Great War - a phrase coined even before it had begun - was expected to be a relatively short affair and, as with most wars, one of great movement. Trench foot or Immersion foot. What is trench foot? 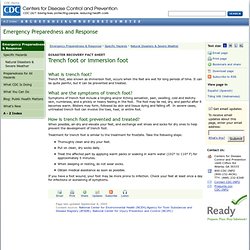 Trench foot, also known as immersion foot, occurs when the feet are wet for long periods of time. It can be quite painful, but it can be prevented and treated. Hemophilia: What is it? Romanov. Russian Archives Online > The Gallery > A Romanov Album p.1. Welcome to the National Hemophilia Foundation. Malaria. Malaria and TravelThe most recent malaria data show a huge increase in malaria cases reported in the United States.Learn More » FDA Revises Mefloquine LabelingDrug Still RecommendedLearn More » Malaria is a mosquito-borne disease caused by a parasite. 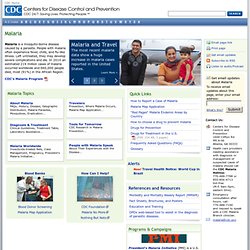 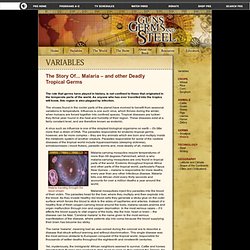 Malaria – and other Deadly Tropical Germs The role that germs have played in history, is not confined to those that originated in the temperate parts of the world. As anyone who has ever travelled into the tropics will know, this region is also plagued by infection. Smallpox. Smallpox is a disease caused by the Variola major virus. 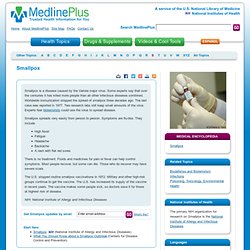 Some experts say that over the centuries it has killed more people than all other infectious diseases combined. Worldwide immunization stopped the spread of smallpox three decades ago. Guns Germs & Steel: Variables. Smallpox. The Story Of... 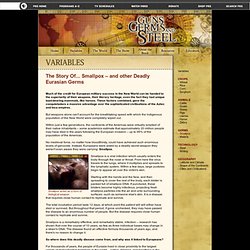 Smallpox – and other Deadly Eurasian Germs. The Free Online Encyclopedia of Washington State History. HistoryLink.org Essay 5100 : Printer-Friendly Format During the 1770s, smallpox (variola major) eradicates at least 30 percent of the native population on the Northwest coast of North America, including numerous members of Puget Sound tribes. This apparent first smallpox epidemic on the northwest coast coincides with the first direct European contact, and is the most virulent of the deadly European diseases that swept over the region during the next 80 to 100 years.

In his seminal work, The Coming of the Spirit of Pestilence, historian Robert Boyd estimates that the 1770s smallpox epidemic killed more than 11,000 Western Washington Indians, reducing the population from about 37,000 to 26,000. By the 1850s, when the first EuroAmerican settlers arrived at Alki Point and along the Duwamish River, diseases had already taken a devastating toll on native peoples and their cultures. Witness to Devastation: The Vancouver Expedition Native American Accounts. Scurvy. By Corinne CorteIllustrated by CJ Kazilek Images in this article are linked to more information. Imagine you are on a sailing ship in 1747. You left England only a couple of months ago and you felt fine. Now you are so tired you can barely walk. Your gums are swollen and so sore it hurts when you are eating. Lucky for you, a passenger on your ship is very interested in your condition. How did he conduct his experiment? Dr. History - British History in depth: Captain Cook and the Scourge of Scurvy.