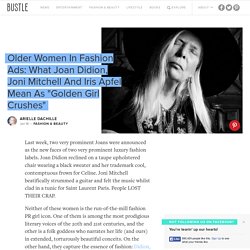 Joan Didion reclined on a taupe upholstered chair wearing a black sweater and her trademark cool, contemptuous frown for Celine. Joni Mitchell beatifically strummed a guitar and felt the music whilst clad in a tunic for Saint Laurent Paris. People LOST THEIR CRAP. Neither of these women is the run-of-the-mill fashion PR girl icon. One of them is among the most prodigious literary voices of the 20th and 21st centuries, and the other is a folk goddess who narrates her life (and ours) in extended, torturously beautiful conceits. Part of the hyper-positive commentary on the events was one of feminist and anti-ageist triumph. In With the Old: Why the Timing Is Perfect for Models Over 60. Ilona Royce Smithkin, Joyce Carpati and Lynn Dell Cohen are favorite subjects of the Advanced Style blog (Photo: Ari Seth Cohen). 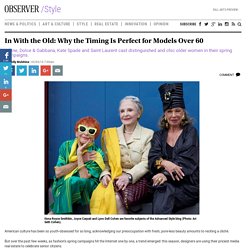 American culture has been so youth-obsessed for so long, acknowledging our preoccupation with fresh, pore-less beauty amounts to reciting a cliché. But over the past few weeks, as fashion’s spring campaigns hit the Internet one by one, a trend emerged: this season, designers are using their priciest media real estate to celebrate senior citizens. First, cool, minimalist Céline selected Joan Didion, 80, as a spring ’15 campaign model. Inspiration Archives - FabOverFifty.com. I have one favor to ask any woman who is reading this, whether you’re a lady of means and wouldn’t be caught dead shopping anywhere but Bergdorf Goodman, or watch your pennies and swear by Marshalls. 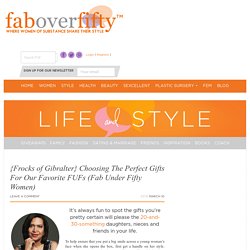 Next time HSN features MarlaWynne apparel, pour yourself a glass of wine (if it’s nighttime), settle into a comfortable chair and “meet” a woman with Bergdorf’s tastes and style, who designs clothes that sell at Marshalls prices, often for even less. I’ll be surprised if you don’t buy at least one piece from Marla’s collection. Is 60 the New 20 When It Comes to Beauty Campaigns? Older Women Take Over Beauty Ads. Let me ask you something—can you recite all the lyrics to the Monkees’ theme song (not just the first four words)? 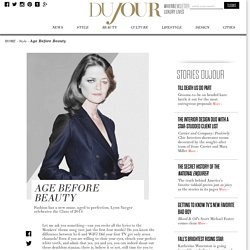 Do you know the difference between hi-fi and WiFi? Grey power No these fashion ads insult older women. Why the new campaigns are not as fashion forward as we think  Joan Didion for Celine, Joni Mitchell for Yves Saint Laurent and Daphne Self, a D&G veteran, are all examples of older models of the momentBut is this really a nod to the older generation or is it just a shock tactic? 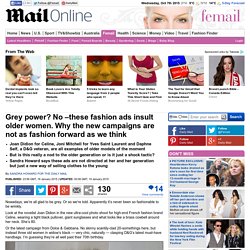 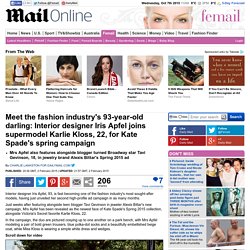 Why Older Women Are the New It-Girls of Fashion. This past January, French fashion house Céline set the Internet abuzz with the release of its spring 2015 print campaign. 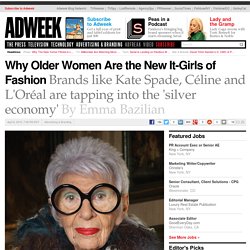 The ads quickly went viral, blazing a path across Instagram, Twitter and the blogosphere before hitting The New York Times, Forbes and The Atlantic. At the center of all the attention was the face of the campaign: 80-year-old author Joan Didion. Female Shoppers No Longer Trust Ads Or Celebrity Endorsements. There was a time when knowing that an A-list star used a face cream or weight-loss shake was enough to get women to implicitly trust a brand. 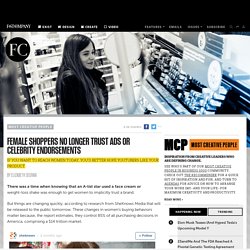 But things are changing quickly, according to research from SheKnows Media that will be released to the public tomorrow. These changes in women's buying behaviors matter because, the report estimates, they control 85% of all purchasing decisions in America, comprising a $14 trillion market. The Internet Has Made Women More Skeptical Today, female consumers appear to be increasingly wary of big companies and the celebrities paid to endorse them. This shift appears to be spurred by the Internet, which has made it much easier to find authentic opinions about products in online reviews and on social media.

"In the past, women would predominantly turn to bloggers they trusted," Samantha Skey, CMO of SheKnows Media, tells Fast Company. Women find these these online everyday experts far more engaging than big companies. Victoria Beckham Wants to Do a Mass Market Collaboration - Fashionista. At the season finale of her 92Y "Fashion Icons" talk series on Wednesday evening, Fern Mallis admitted that not all of her industry colleagues were on board with calling her guest Victoria Beckham, who never attended design school, an "icon. 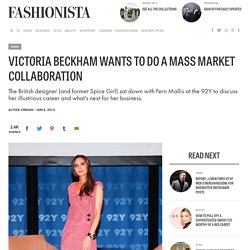 " But there's no arguing that Beckham has made it in fashion, admired not only for her personal style but also, far more importantly, as a designer. Her seven-year-old ready-to-wear line is now stocked by the most prestigious retailers in New York — Barneys and Bergdorf Goodman among them — and her recent collections have received acclaim from top critics and earned her two British Fashion Awards for Designer Brand of the Year, one in 2011 and one in 2014. Movie: mass customisation "can be the future of fashion" Mass customisation "can be the future of fashion," says Knyttan co-founder Dezeen and MINI Frontiers: Ben Alun-Jones of Knyttan explains how customers can create bespoke knitwear at the company's "factory of the future" and claims mass customisation is transforming the role of designers (+ movie). 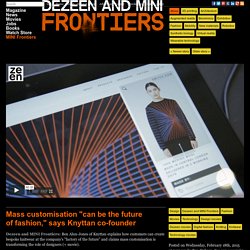 Knyttan, which Alun-Jones co-founded with Kirsty Emery and Hal Watts in 2013, offers the opportunity to customise a jumper or scarf design via a web app, and have it produced to order at the company's factory and shop at Somerset House in London. Knyttan works with a range of different designers to create "style guides" that customers can then customise via the app to make bespoke pieces.

UK graphic designer Kate Moross, for example, created a range of geometric patterns for the brand, which customers can manipulate in different ways to create almost limitless variations. "Now we've made the shop and we've shown how it can work, it's totally changed the conversation," he says. "Technology is going to turn the entire fashion industry inside out" The fashion industry is "saturated" says Olivier Theyskens.

Interview: the former head of two Parisian fashion houses has discouraged students from setting up their own brands because the industry is overwhelmed by too many new names. Olivier Theyskens, who has previously headed Rochas and Nina Ricci, told Dezeen that the fashion industry is unable to cope with the surplus of young designers starting their own labels. "It's saturated," said Theyskens during an exclusive interview during Seoul Design Week in November. "It's the end of fashion as we know it" says Li Edelkoort. Design Indaba 2015: fashion is dead, trend forecaster Li Edelkoort has declared, describing the fashion industry as "a ridiculous and pathetic parody of what it has been" (+ interview). Lidewij Edelkoort, one of the world's most influential fashion forecasters, used her annual presentation at Design Indaba in Cape Town to fire a broadside at the industry. She told Dezeen: "This is the end of fashion as we know it.

" Edelkoort said her interest in fashion had now been replaced by an interest in clothes, since fashion has lost touch with what is going on in the world and what people want. "Fashion is insular and is placing itself outside society, which is a very dangerous step," she said in an interview with Dezeen after her presentation. Edelkoort listed a number of reasons for the crisis in fashion, starting with education, where young designers are taught to emulate the famous names. TOG's customisable furniture means "no more trends" - Philippe Starck. Diesel looking to reinvent itself under Nicola Formichetti. The Trouble with Ready-to-Wear. LONDON, United Kingdom — For consumers, high-end fashion delivers significantly less ‘bang for buck’ than other luxury categories. While you can wear the same watch or necklace or handbag every day — and always look good — you cannot wear the same dress to every event.