Smithsonian. It was the end of term at Kirkkojarvi Comprehensive School in Espoo, a sprawling suburb west of Helsinki, when Kari Louhivuori, a veteran teacher and the school’s principal, decided to try something extreme—by Finnish standards. 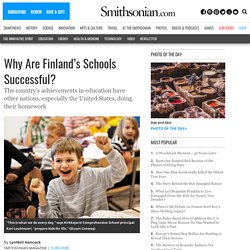 One of his sixth-grade students, a Kosovo-Albanian boy, had drifted far off the learning grid, resisting his teacher’s best efforts. The school’s team of special educators—including a social worker, a nurse and a psychologist—convinced Louhivuori that laziness was not to blame. So he decided to hold the boy back a year, a measure so rare in Finland it’s practically obsolete.