2/3 of World Has Herpes. Two-thirds of the world's population has the virus that causes cold sores, the World Health Organization said Wednesday. 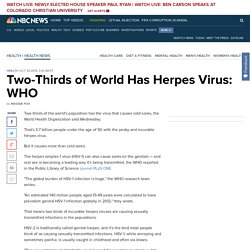 That's 3.7 billion people under the age of 50 with the pesky and incurable herpes virus. But it causes more than cold sores. The herpes simplex 1 virus (HSV-1) can also cause sores on the genitals — and oral sex is becoming a leading way it's being transmitted, the WHO reported in the Public Library of Science journal PLoS ONE. HPV Sharply Reduced in Teenage Girls Following Vaccine, Study Says.

70% of Americans Infected with HPV. More than two-thirds of healthy Americans have a human papillomavirus (HPV) infection on some part of their body, a new study suggests. 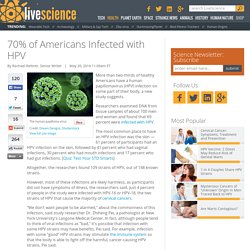 How does the STD testing quiz work? 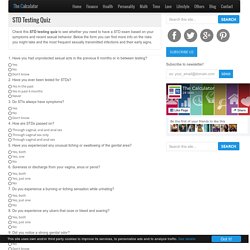 This questionnaire focuses on questions that have to do with both your sexual behavior and any symptoms, general to specific that you might be experiencing and that could be put in relation to a sexually transmitted infection. There are ten questions you need to answer and then press the get results button. You are then going to be directed whether to see a specialist for further medical testing and you might also receive some useful info in relation to your answers.

What is STD testing? STD testing is very easy to get in most countries through a health care provider. The main issue is that in the case of many STDs, there might not be any symptoms present thus making them even harder to detect. STDs Quiz - In The Know Zone. STD/STIs. CDC Sees 'Alarming' Increase in Sexually Transmitted Diseases. Common sexually transmitted diseases such as syphilis and gonorrhea have exploded in recent years, in part because of reduced funding for public health clinics, federal officials reported Tuesday. 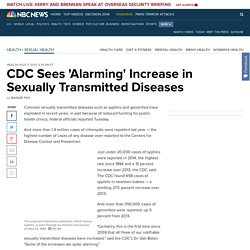 And more than 1.4 million cases of chlamydia were reported last year — the highest number of cases of any disease ever reported to the Centers for Disease Control and Prevention. Just under 20,000 cases of syphilis were reported in 2014, the highest rate since 1994 and a 15 percent increase over 2013, the CDC said.

The CDC found 458 cases of syphilis in newborn babies — a startling 27.5 percent increase over 2013. And more than 350,000 cases of gonorrhea were reported, up 5 percent from 2013. "Certainly, this is the first time since 2006 that all three of our notifiable sexually transmitted diseases have increased," said the CDC's Dr. Most of the increases have been seen in young adults, who get infected soon after they first begin having sex. "Young people are the most vulnerable," Bolan said. 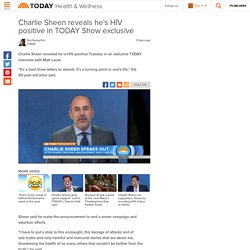 "It's a hard three letters to absorb. It's a turning point in one's life," the 50-year-old actor said. Sheen said he made the announcement to end a smear campaign and extortion efforts. He gave her HIV. Now she fights his release from prison. Katharine Richards is living with HIV. 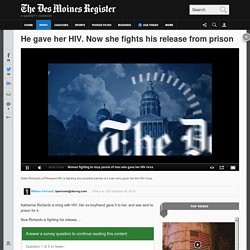 Her ex-boyfriend gave it to her, and was sent to prison for it. Now Richards is fighting his release. “He is not safe. He has not taken responsibility. He hasn’t ever apologized,” Richards, 43, of Pleasant Hill told The Des Moines Register. Lonnie Shane Tabor, 50, has served six years of a 25-year prison sentence for criminally transmitting HIV and will be considered for parole by the Iowa Board of Parole on Wednesday. Tabor was convicted under a state law that was rewritten last year by the Iowa Legislature amid arguments that it was draconian and a product of anti-AIDS hysteria in the 1990s.

Koala chlamydia: The STD threatening an Australian icon. The koala is unique to Australia and is an important symbol of the country. 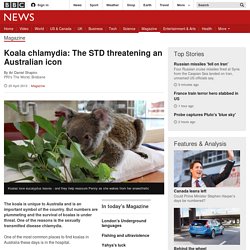 But numbers are plummeting and the survival of koalas is under threat. One of the reasons is the sexually transmitted disease chlamydia. One of the most common places to find koalas in Australia these days is in the hospital. About 50 miles (80km) north of Brisbane, at the Australia Zoo Wildlife Hospital, a female koala is under a mild anaesthetic. "She's quite an old girl - I think she's over 10 years," says veterinary surgeon Amber Gillett. The koala is called Penny. Chlamydia Outbreak Among High School Students - CBS 7: Multimedia. 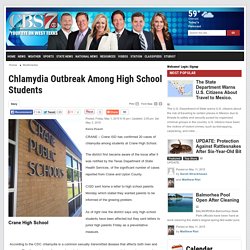 The district first became aware of the issue after it was notified by the Texas Department of State Health Services, of the significant number of cases reported from Crane and Upton County. CISD sent home a letter to high school parents Monday which stated they wanted parents to be informed of the growing problem. As of right now the district says only high school students have been affected but they sent letters to junior high parents Friday as a preventative measure. According to the CDC chlamydia is a common sexually transmitted disease that affects both men and women. The disease shows few symptoms but can cause serious, permanent damage to a woman's reproductive system, making it difficult or impossible for her to get pregnant later on.

Chlamydia can be cured with proper treatment. Scientists are using herpes to treat skin cancer — and it’s working. In a few months time, those suffering from skin cancer may find an unlikely hero in their treatment regimen: herpes. 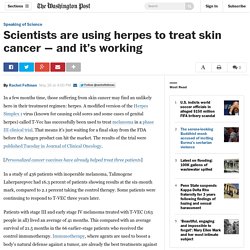 A modified version of the Herpes Simplex 1 virus (known for causing cold sores and some cases of genital herpes) called T-Vec has successfully been used to treat melanoma in a phase III clinical trial. That means it's just waiting for a final okay from the FDA before the Amgen product can hit the market. The results of the trial were published Tuesday in Journal of Clinical Oncology. [Personalized cancer vaccines have already helped treat three patients] In a study of 436 patients with inoperable melanoma, Talimogene Laherparepvec had 16.3 percent of patients showing results at the six-month mark, compared to 2.1 percent taking the control therapy. 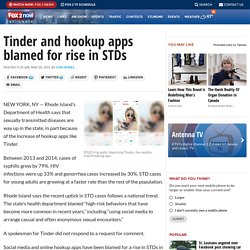 NEW YORK, NY — Rhode Island’s Department of Health says that sexually transmitted diseases are way up in the state, in part because of the increase of hookup apps like Tinder. Between 2013 and 2014, cases of syphilis grew by 79%. HIV infections were up 33% and gonorrhea cases increased by 30%. STD cases for young adults are growing at a faster rate than the rest of the population. Rhode Island says the recent uptick in STD cases follows a national trend. What is an STI? How can I reduce my risk of getting a sexually transmitted disease? Reindeer STD. Pelvic Inflammatory Disease - CDC Fact Sheet. Basic fact sheets are presented in plain language for individuals with general questions about sexually transmitted diseases.

About STDs - Info, Posts, and Pages about STIs/STDs. About STDs - Your Ultimate Reference Guide - The STD Project. Chlamydia. Johns Hopkins Sued for $1B for Guatemala Experiments That Infected Hundreds With STDs.