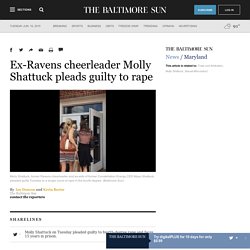 Shattuck, the ex-wife of former Constellation Energy CEO Mayo A. Shattuck, was accused of having a relationship with a 15-year-old classmate of her son — including performing oral sex on him in a rental property in Bethany Beach, prosecutors allege. No statement of facts was read aloud Tuesday and Shattuck said little except to answer the judge's questions. "Did you commit the offense you are pleading guilty to?

In asking 40,000 households about rape and sexual violence, the survey uncovered that 38 percent of incidents were against men. The number seemed so high that it prompted researcher Lara Stemple to call the Bureau of Justice Statistics to see if it maybe it had made a mistake, or changed its terminology. After all, in years past men had accounted for somewhere between 5 and 14 percent of rape and sexual violence victims.

Cornell Frat President Accused of Attempted Rape Released From Custody, Not Allowed on Campus. A Cornell University fraternity president accused of attempted rape and sexual abuse was released from custody today on his own recognizance, but a Cornell representative told ABC News the student is not allowed on campus, where he lives. 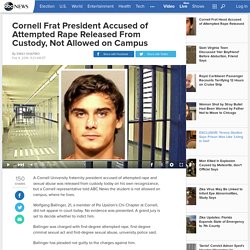 Wolfgang Ballinger, 21, a member of Psi Upsilon's Chi Chapter at Cornell, did not appear in court today. No evidence was presented. A grand jury is set to decide whether to indict him. A Needed Response. Visionnez vos émissions de télé et vos films en ligne. To Prevent Sexual Assault, Schools And Parents Start Lessons Early. A growing number of states are now mandating some sort of education around sexual assault in public schools. 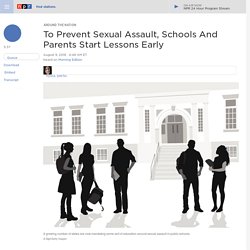 A-Digit/Getty Images hide caption toggle caption A-Digit/Getty Images If colleges are a hunting ground, as they've been called, for sexual predators, advocates say that high schools are the breeding ground — and that any solution must start there. They say efforts at college are too little, too late. The push for earlier intervention is coming from a wide range of voices, including student survivors, law enforcement officials — and New England Patriots owner Bob Kraft. Ex-University of Colorado student's sex assault sentence questioned.

A Boulder jury convicted Austin James Wilkerson in May of one count of sexual assault of a helpless victim and one count of unlawful sexual contact. 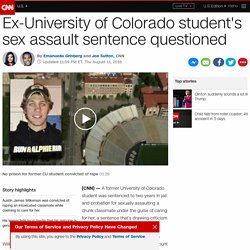 Judge Patrick Butler sentenced Wilkerson to two years in jail under work release, meaning he can leave during the day for school or work and return at night, and 20 years of sex offender-specific intensive probation, which includes treatment and therapy and lifetime registration as a sex offender with the chance to get off the registry after 20 years. The sentence fell between the Probation Department's recommendation of no prison time, based on Wilkerson's show of remorse, and the district attorney's request of four to 20 years in prison, based on the nature of the crime and its impact on the survivor.

"Mr. Wilkerson deserves to be punished, but I think we all need to find out whether he truly can or cannot be rehabilitated. " Man Who Helped Stop Stanford Rape: Turner Did Not Seem Too Drunk. Woman Blamed For Own Rape, School Officials Lacked Protection. Image Source: The Globeandmail.com A woman blamed for own rape is fighting back. 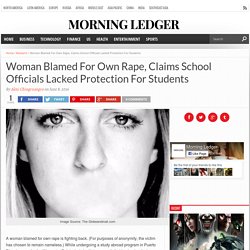 (For purposes of anonymity, the victim has chosen to remain nameless.) While undergoing a study abroad program in Puerto Rico, lawyers for the Worcester Polytechnic Institute are partially blaming her for her own attack according to court documents posted by the NECN. In it, they claim that her actions before her rape should be considered first, since she was under the influence of alcohol and willingly followed a stranger to the rooftop. WPI President Laurie Leshin released a statement that made it clear that the university has not vetted or approved the legal matter, especially since they are only litigating the case and are not partnered with WPI.

The Jane Doe in question shared that back in April 2012, she was returning to her dorm in Puerto Rico when the security guard on duty, William Rodriguez, followed her to the elevator.

Reports of Rape Linked to Online Dating Rise 450 Percent in Five Years. Reports of online dating-related rape have risen by more than 450 percent in six years, the UK's National Crime Agency announced on Sunday, warning that the surge in online dating had given rise to a "new kind of sexual offender. 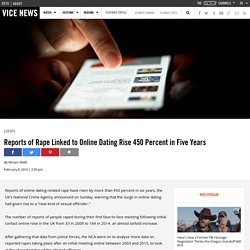 " The number of reports of people raped during their first face-to-face meeting following initial contact online rose in the UK from 33 in 2009 to 184 in 2014, an almost sixfold increase. After gathering that data from police forces, the NCA went on to analyze more data on reported rapes taking place after an initial meeting online between 2003 and 2015, to look at the characteristics of the alleged offenses.

It said 85 percent of those reporting rapes were women and 15 percent were men. Just over 40 percent of victims had spent time in private on their first date, and 71 percent of alleged rapes that occurred on the first face-to-face meeting following online contact were committed at the victim's or offender's residence. 1. Baylor officials accused of failing to investigate sexual assaults fully, adequately providing support for alleged victims. 4:54 PM ETPaula LavigneESPN Staff Writer CloseData analyst and reporter for ESPN's Enterprise and Investigative Unit.Winner, 2014 Alfred I. duPont Columbia University Award; finalist, 2012 IRE broadcast award; winner, 2011 Gannett Foundation Award for Innovation in Watchdog Journalism; Emmy nominated, 2009. print During the first rape, Tanya was shoved into the muddy ground before her pants were pulled down. 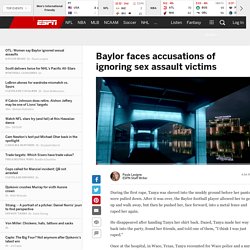 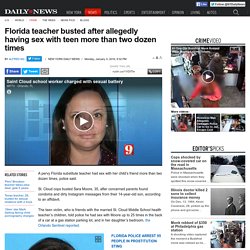 St. Cloud cops busted Sara Moore, 35, after concerned parents found condoms and dirty Instagram messages from their 14-year-old son, according to an affidavit. The teen victim, who is friends with the married St. Teacher accused of sex with 16-year-old boy at Wisc. school. A Milwaukee-area high school reading teacher had sex with a 16-year-old male student in her classroom a dozen times, officials said. 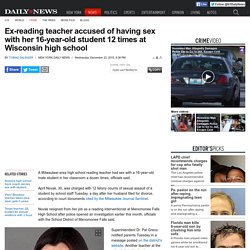 Thursday's birth was confirmed by Asunción Red Cross Director Mario Villalba. In the mostly Catholic country, 684 girls between the ages of 10 and 14 gave birth last year. Most of the minors had been victims of sexual abuse, according to government figures. A Paraguayan law bans abortions except in cases where the pregnancy endangers the mother's life. A Harvard student wrote about her rape. Here’s what happened next. - Education. Viviana Maymi hid a secret as she sat in a Harvard dining hall and watched her classmates react to this statistic: Nearly one-third of female seniors had experienced “unwanted sexual contact.”

The Harvard senior, who was raped two years ago, had told very few people about the night she was assaulted. But seeing her experience boiled down to a number in a campus survey sparked something in her. Maymi returned to her dorm room and started typing. Since then, the story has been viewed more than 100,000 times on The Crimson’s site and has been picked up by other news outlets, including Business Insider and The Huffington Post. Ex-teacher sentenced for sex with boy. Steven Lane/AP A former Washington state high school teacher has been sentenced to five years in prison for having sex with a 15-year-old student.

Vandy Rape Case. Teen's plight: From dating app to sex offender registry. Michigan judge grants Zach Anderson leniency, keeps him off Michigan sex offender registry. Here's How I Was Raped. On a chilly night in 2013, as the stress of the semester was coming to a peak, I had the most scarring experience of my life. In the moment, I wasn't aware that it was happening.

Yet I will always remember the trauma. Being sexually assaulted—raped—shattered my self-image and confidence in my own voice. My self-worth was stolen from me by someone I previously trusted. In hindsight, it’s painfully obvious that he did me wrong. Still, I was the one who dealt with the repercussions. Since then, I have healed. I want to share my story for several reasons: to paint an accurate picture of how rape happens at this prestigious institution, to encourage my peers to take an active role in prevention, to dispel the notion that sexual assault is a spectrum, and to tell other assault survivors that they are not alone and they are not to blame.