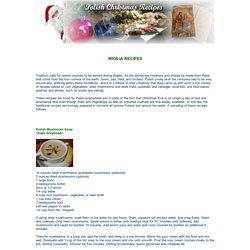 All the dishes are meatless and should be made from foods that come from the four corners of the earth: forest, sea, field, and orchard. Polish cooks over the centuries had to be very resourceful, working within these limitations, and it is a tribute to their creativity that they came up with such a rich variety of recipes based on root vegetables, dried mushrooms and dried fruits, potatoes and cabbage, local fish, and flour-based pastries and dishes, such as kluski and pierogi.

These recipes are loved by Poles everywhere and in spite of the fact that Christmas Eve is no longer a day of fast and abstinence and even though fruits and vegetables as well as imported seafood are now widely available, on this day the traditional recipes are lovingly prepared in kitchens all across Poland and around the world. A sampling of these recipes follows. 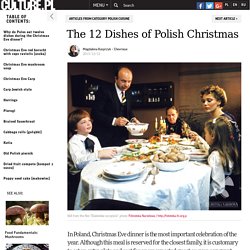 Although this meal is reserved for the closest family, it is customary to set an extra plate and seat for an unexpected guest or even a vagrant. Most of the dishes served are cooked specifically on this special day – and only once a year! Christmas Eve practices are guided by custom rather than by faith, and so Christian (predominantly Catholic) conservative families and modern or aethist families alike celebrate with traditional cuisine. Meat is not allowed. Christmas Eve dinner starts when the first star appears in the sky. The tradition calls for twelve traditional courses to be served during the Polish Christmas Eve. Christmas Eve dinner often starts with a beetroot soup (red borscht) - probably the most popular soup for that day. Polish Christmas Traditions. Christmas Wafer - Oplatek Sharing of the oplatek (pronounced opwatek) is the most ancient and beloved of all Polish Christmas traditions. 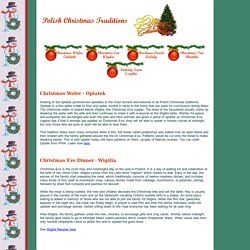 Oplatek is a thin wafer made of flour and water, similar in taste to the hosts that are used for communion during Mass. The Christmas wafer is shared before Wigilia, the Christmas Eve supper. The head of the household usually starts by breaking the wafer with his wife and then continues to share it with everyone at the Wigilia table. Wishes for peace and prosperity are exchanged and even the pets and farm animals are given a piece of oplatek on Christmas Eve.

This tradition dates back many centuries when a thin, flat bread called podplomyk was baked over an open flame and then shared with the family gathered around the fire on Christmas Eve. Polish Christmas Traditions. Christmas Tree in Wrocław in 2014 If you’re reading this text that means that you’re either preparing yourself for the upcoming Christmas and you don’t want to get surprised by Polish celebrations or you’re just using your mobile phone in the middle of the Christmas dinner because you saw so many “weird” things and you were asked so many different questions that Foreigners in Poland is your last hope. 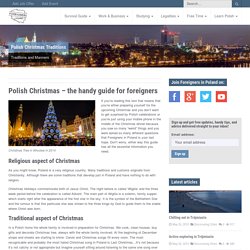 Don’t worry, either way this guide has all the essential information you need. Religious aspect of Christmas As you might know, Poland is a very religious country. Many traditions and customs originate from Christianity. Christmas Holidays commemorate birth of Jesus Christ. Christmas Around the World. In Poland, Advent is the beginning of Christmas Time. 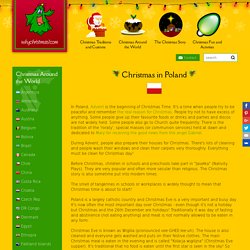 It's a time when people try to be peaceful and remember the real reason for Christmas. People try not to have excess of anything. Some people give up their favourite foods or drinks and parties and discos are not widely held. Some people also go to Church quite frequently. There is the tradition of the 'roraty', special masses (or communion services) held at dawn and dedicated to Mary for receiving the good news from the angel Gabriel.