May heath, burn and brake come to the calling of the horn.

The Knight of the Burning Pestle, by Beaumont & Fletcher, edited by F. W. Moorman. * A Project Gutenberg Canada Ebook * This ebook is made available at no cost and with very few restrictions. 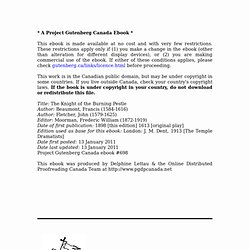 These restrictions apply only if (1) you make a change in the ebook (other than alteration for different display devices), or (2) you are making commercial use of the ebook. If either of these conditions applies, please check gutenberg.ca/links/licence.html before proceeding. This work is in the Canadian public domain, but may be under copyright in some countries. If you live outside Canada, check your country's copyright laws. Title: The Knight of the Burning Pestle Author: Beaumont, Francis (1584-1616) Author: Fletcher, John (1579-1625) Editor: Moorman, Frederic William (1872-1919) Date of first publication: 1898 [this edition] 1613 [original play] Edition used as base for this ebook: London: J. This ebook was produced by Delphine Lettau & the Online Distributed Proofreading Canada Team at A Play written by FRANCIS BEAUMONTand JOHN FLETCHER Literary History.

"Rebecca. Monylacke. Song Lyrics. We receive many, many requests for the lyrics for songs sung by Spiral Dance, so we've decided to include a Song Lyrics page on our web site The vast majority of our songs are written by Adrienne and she maintains the copyright for these lyrics However, if you wish to cover one of our songs, please Contact Us; we'd much rather know who and where the songs are going and let you share them with our Blessing! 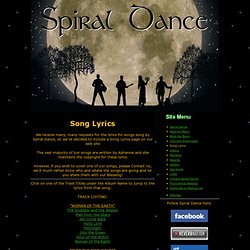 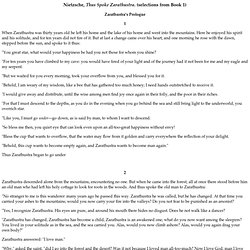 (selections from Book 1) Zarathustra's Prologue When Zarathustra was thirty years old he left his home and the lake of his home and went into the mountains. Here he enjoyed his spirit and his solitude, and for ten years did not tire of it. But at last a change came over his heart, and one morning he rose with the dawn, stepped before the sun, and spoke to it thus: "You great star, what would your happiness be had you not those for whom you shine? "For ten years you have climbed to my cave: you would have tired of your light and of the journey had it not been for me and my eagle and my serpent. 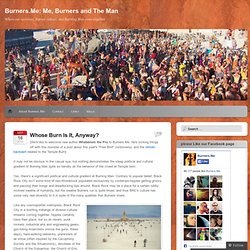 He's kicking things off with this monster of a post about this year's "Free Bird" controversy, and the vitriolic backlash related to the Temple Burn] It may not be obvious to the casual eye, but nothing demonstrates the steep political and cultural gradient of Burning Man quite so handily as the behavior of the crowd at Temple burn. Yes, there’s a significant political and cultural gradient at Burning Man.

Contrary to popular belief, Black Rock City isn’t some kind of neo-Woodstock populated exclusively by contempo-hippies getting groovy and passing their bongs and dreadlocking tips around. Black Rock may be a place for a certain oddly-inclined swathe of humanity, but the swathe Burners cut is quite broad, and thus BRC’s culture has some very real diversity to it in spite of the many qualities that Burners share. When the Man was younger and the City less densely populated, there were a lot fewer rules. Whose Burn is it? Goat. The domestic goat (Capra aegagrus hircus) is a subspecies of goat domesticated from the wild goat of southwest Asia and Eastern Europe. 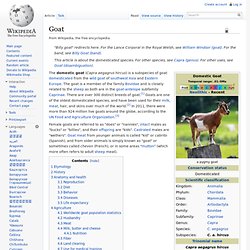 The goat is a member of the family Bovidae and is closely related to the sheep as both are in the goat-antelope subfamily Caprinae. There are over 300 distinct breeds of goat.[1] Goats are one of the oldest domesticated species, and have been used for their milk, meat, hair, and skins over much of the world.[2] In 2011, there were more than 924 million live goats around the globe, according to the UN Food and Agriculture Organization.[3] Etymology The Modern English word goat comes from Old English gāt "she-goat, goat in general", which in turn derives from Proto-Germanic *gaitaz (cf. 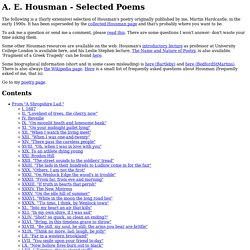 It has been superseded by the collected Housman page and that's probably where you want to be. To ask me a question or send me a comment, please read this. There are some questions I won't answer: don't waste your time asking them.