Distinctions Of Sound In Temporal Spheres 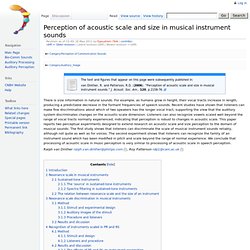 For example, as humans grow in height, their vocal tracts increase in length, producing a predictable decrease in the formant frequencies of speech sounds. Recent studies have shown that listeners can make fine discriminations about which of two speakers has the longer vocal tract, supporting the view that the auditory system discriminates changes on the acoustic-scale dimension. Listeners can also recognize vowels scaled well beyond the range of vocal tracts normally experienced, indicating that perception is robust to changes in acoustic scale. This paper reports two perceptual experiments designed to extend research on acoustic scale and size perception to the domain of musical sounds: The first study shows that listeners can discriminate the scale of musical instrument sounds reliably, although not quite as well as for voices. Ralph van Dinther ralph.van.dinther@philips.com, Roy Patterson rdp1@cam.ac.uk Method. Islamism, Moroccan-Style: The Ideas of Sheikh Yassine. 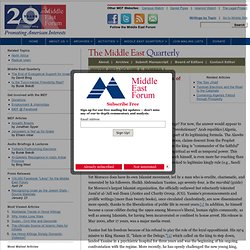 For now, the answer would appear to be "no. " The Moroccan monarchy, unlike the classic "revolutionary" Arab republics (Algeria, Iraq, Syria, and Egypt), explicitly invokes religion as part of its legitimizing formula. The Alawite dynasty, which has ruled the country since the late 1600s, claims descent from the Prophet Muhammad; according to the Moroccan constitution the king is "commander of the faithful" (amir al-mu'minin), conferring upon him supreme spiritual as well as temporal power. This claim to religious legitimacy, personified in the monarch himself, is even more far-reaching than that of other Arab monarchies where Islam is also invoked to legitimize kingly rule (e.g., Saudi Arabia and Jordan). Yet Morocco does have its own Islamist movement, led by a man who is erudite, charismatic, and venerated by his followers. Yassine lost his freedom because of his refusal to play the role of the loyal oppositionist. Temporal Parts. First published Sun Feb 1, 2004; substantive revision Thu Oct 28, 2010 Material objects extend through space by having different spatial parts in different places. 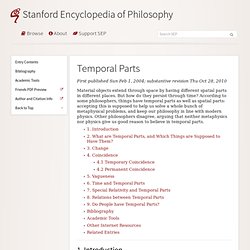 But how do they persist through time? According to some philosophers, things have temporal parts as well as spatial parts: accepting this is supposed to help us solve a whole bunch of metaphysical problems, and keep our philosophy in line with modern physics. Other philosophers disagree, arguing that neither metaphysics nor physics give us good reason to believe in temporal parts. 1. You're performing an amazing trick right now: you're in two places at once. None of this is special to people: inanimate objects also extend through space by having spatial parts. Things and people take up time as well as taking up space: you existed yesterday, and, unless reading this article is a real strain, you will exist tomorrow too.

Some philosophers believe that you take up time by having different temporal parts at different times. 2. 3. 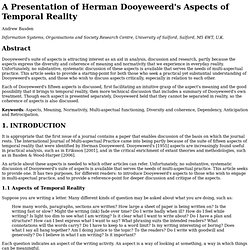 Abstract Dooyeweerd's suite of aspects is attracting interest as an aid in analysis, discussion and research, partly because the aspects express the diversity and coherence of meaning and normativity that we experience in everyday reality. Unfortunately, no substantive, systematic discussion of these aspects is available that serves the needs of multi-aspectual practice. This article seeks to provide a starting-point for both those who seek a practical yet substantial understanding of Dooyeweerd's aspects, and those who wish to discuss aspects critically, especially in relation to each other. Each of Dooyeweerd's fifteen aspects is discussed, first facilitating an intuitive grasp of the aspect's meaning and the good possibility that it brings to temporal reality, then more technical discussion that includes a summary of Dooyeweerd's own treatment. 1.2 Suites of Aspects.