France begins Muslim deportations after shootings. Mohammed Merah killed seven people in France and was shot dead after a long siege in Toulouse. 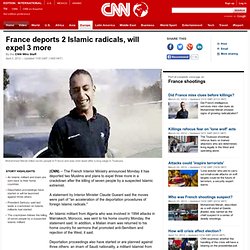 Random. Business. CNN. India bids to be Africa's 'new best friend' Fire destroys private-island home of Virgin head Richard Branson. Lightning strikes Branson home The fire was sparked by a lightning strike during Tropical Storm Irene20 people, including actress Kate Winslet, were in the house at the timeNo one was injured (CNN) -- A lightning strike sparked a fire Monday that destroyed the Caribbean island home of Virgin Group Chairman Richard Branson, a statement from the media mogul said. 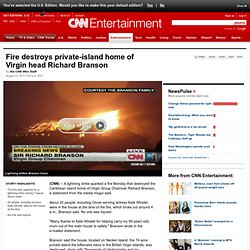 About 20 people, including Oscar-winning actress Kate Winslet, were in the house at the time of the fire, which broke out around 4 a.m., Branson said. No one was injured. Gadhafi son said to escape; rebels extend grip on Tripoli. Gadhafi's son: 'Things are fine in Libya' 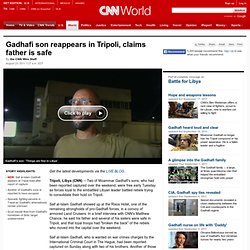 CEO of loss-hit UBS bank resigns. The board at UBS has accepted Gruebel's resignationIt follows the recent revelation by UBS of a $2.3 billion loss in unauthorized tradingA UBS trader faces charges in connection with the losses London (CNN) -- The head of Swiss banking giant UBS has resigned in the wake of a $2.3 billion loss in unauthorized trading, the bank announced Saturday. 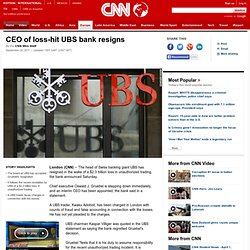 Chief executive Oswald J. Russia's Medvedev backs Putin for another presidential run. The Russian president and prime minister pictured at the tomb of the unknown soldier in June 2011. 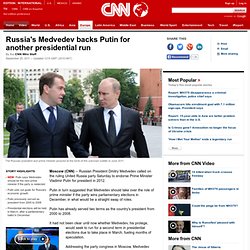 NEW: Putin says Medvedev should be the next prime minister if the party is reelected Putin sets out goals for Russia's economic growthPutin previously served as president from 2000 to 2008Presidential elections will be held in March, after a parliamentary ballot in December Moscow (CNN) -- Russian President Dmitry Medvedev called on the ruling United Russia party Saturday to endorse Prime Minister Vladimir Putin for president in 2012. Putin in turn suggested that Medvedev should take over the role of prime minister if the party wins parliamentary elections in December, in what would be a straight swap of roles.

Putin has already served two terms as the country's president from 2000 to 2008. Putin backed for 2012 presidency. Steve Jobs as master showman, cult hero. Apple's product announcements were treated like rock concerts by tech journalists when Steve Jobs was leading them. 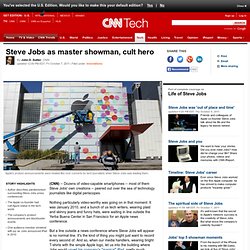 Author describes pandemonium surrounding Steve Jobs press conferencesThe Apple co-founder had cult-figure status in the tech worldThe company's product annoucements are blockbuster eventsOne audience member shrieked with joy as Jobs announced iPad in 2010 (CNN) -- Dozens of video-capable smartphones -- most of them Steve Jobs' own creations -- peered out over the sea of technology journalists like digital periscopes. Nothing particularly video-worthy was going on in that moment: It was January 2010, and a bunch of us tech writers, wearing plaid and skinny jeans and funny hats, were waiting in line outside the Yerba Buena Center in San Francisco for an Apple news conference. But a line outside a news conference where Steve Jobs will appear is no normal line. Unravelling the tale behind the Apple logo. A number of stories have cropped up over the years to explain the origin of the Apple logo design. 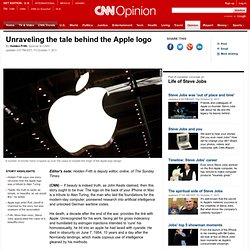 Holden Frith says one story recounts how the Apple logo was a tribute to Alan Turing"Sadly, the truth is rarely as simple, or beautiful, as we would like," he writesApple logo artist Rob Janoff is charmed by the story but was unaware of the associationFrith: More than most, Steve Jobs appreciated the value of a beautiful story Editor's note: Holden Frith is deputy editor, online, of The Sunday Times. (CNN) -- If beauty is indeed truth, as John Keats claimed, then this story ought to be true: The logo on the back of your iPhone or Mac is a tribute to Alan Turing, the man who laid the foundations for the modern-day computer, pioneered research into artificial intelligence and unlocked German wartime codes.

Live blog: One of captured Gadhafi sons has escaped, official says. As Libyan rebels fought to consolidate their hold on Tripoli on Monday and early Tuesday, reports emerged that two sons of Libya's longtime leader were free despite earlier reports that rebels had captured them. 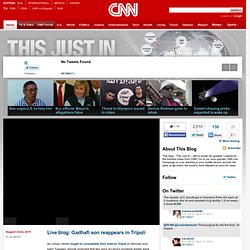 Saif al-Islam Gadhafi, son of Libyan leader Moammar Gadhafi, appeared to reporters in a convoy of armored Land Cruisers in Tripoli on Tuesday morning, more than a day after rebels claimed they had captured him. Hours earlier, Libya's ambassador to the United States said that one of Moammar Gadhafi's other sons, Mohammed Gadhafi, had escaped. Can Uganda avoid the âoil curse?â Kampala, Uganda (CNN) Along the Entebbe Road, that bustling, traffic-ridden street that links the airport to Uganda’s capital city Kampala, is a small hairdresser called “Obama Salon.” 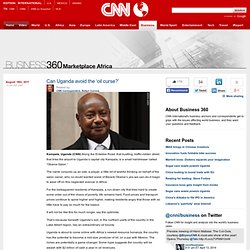 The name conjures up an ode, a prayer, a little bit of wishful thinking on behalf of the salon owner, who no doubt wanted some of Barack Obama’s yes-we-can-do-it magic to wear off on this neglected avenue in Africa. For the beleaguered residents of Kampala, a run-down city that tries hard to create some order out of the chaos of poverty, life remains hard. Food prices and transport prices continue to spiral higher and higher, making residents angry that those with so little have to pay so much for the basics. Maathai 'gave African women a voice' In 2004, Maathai was awarded the Nobel Peace Prize for her efforts to promote sustainable development, democracy and peace. 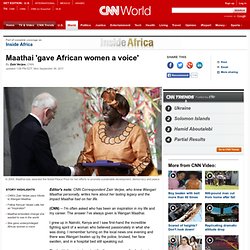 CNN's Zain Verjee pays tribute to Wangari Maathai Fellow Kenyan Verjee calls her an "inspiration" Maathai embodied change she wanted to see in the world She gave underprivileged African women a voice. Official: Gunmen seize French woman in Kenya, take her to Somalia. A man sits on a donkey in Ras Gitau, Lamu archipelago, near where a Frenchwoman was abducted. The kidnapped woman is "a kind and gentle person," an acquaintance saysShe was taken by Somali bandits, Kenya's security minister saysSecurity forces pursued the men but they made it over the border, he saysThe kidnapping victim lived on Manda Island, near a popular beach resort (CNN) -- A French woman seized in northern Kenya was taken to Somalia by her captors after a sea battle to rescue her failed, Kenyan government officials said. Gunmen snatched the woman early Saturday from her holiday home in Manda Island, close to where a Briton was abducted and her husband killed last month.

They were "10 heavily armed Somali bandits suspected to be al-Shabaab operatives" from Ras Kamboni, across the border in Somalia, Kenyan security minister George Saitoti said in a statement. Johansson defends privacy after nude photos posted online. American actress Scarlett Johansson is unhappy that her privacy has been violated by the posting of online nude photos. "Who doesn't want to protect their own privacy? " the actress asksHackers allegedly stole nude photos from her phone and posted them onlineShe was in Kenya as an Oxfam ambassador NAIROBI, Kenya (CNN) -- Speaking out for the first time since nude pictures of her were leaked on the Internet, actress Scarlett Johansson defended the right to privacy, even for high-profile celebrities such as herself.

Asking why protecting privacy is important is a redundant question, she told CNN's David McKenzie. U.S. officials: Gadhafi could be planning a 'last stand' Fighting fierce 40 miles from Tripoli NEW: A Libyan official says neither Gadhafi, his wife or children are leavingNEW: U.S. and NATO officials say they have no indication Gadhafi is leavingFormer Libyan prime minister joins opposition forces, rebels sayGadhafi could be planning a final offensive against civilians, one official says Tripoli, Libya (CNN) -- Libyan officials are rejecting rebel claims that Moammar Gadhafi is seeking refuge for his family, saying Friday that neither the leader nor his wife and children plan to leave the country. Libyan Deputy Foreign Minister Khaled Kaim told CNN that Gadhafi and his family are staying in the country, countering rebel reports that the governments of Egypt, Morocco, Tunisia and Algeria have been asked to accept the family.

U.S. and NATO officials also say they have no indication Gadhafi is making preparations to leave. Rebels capture Zawiya oil refinery NATO airstrikes damage Tripoli. Live blog: Gadhafi son talks possible cease-fire; journalists escape Tripoli hotel. Dominique Strauss-Kahn's Rape Charges Dismissed. Dominique Strauss-Kahn's appearance in court on Tuesday, his first since July 1, has turned out to be his last trip to the Manhattan Criminal Courthouse. In the weeks since the latest hearing over his alleged sexual assault of a chambermaid at a midtown Manhattan hotel, in which Judge Michael J.

Obus freed Strauss-Kahn and vacated his bail because of questions about the accuser's credibility "For a trial jury to find the defendant guilty, it must be persuaded beyond a reasonable doubt that the complainant is credible," the motion to dismiss says. Earthquake rattles East Coast.