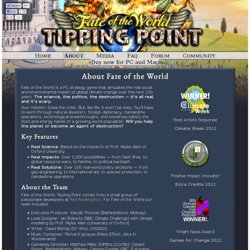 The science, the politics, the destruction — it’s all real, and it’s scary. Your mission: Solve the crisis. But, like life, it won’t be easy. You’ll have to work through natural disasters, foreign diplomacy, clandestine operations, technological breakthroughs, and somehow satisfy the food and energy needs of a growing world population. Will you help the planet or become an agent of destruction? About the Team Fate of the World: Tipping Point comes from a small group of passionate developers at Red Redemption . Executive Producer: Klaude Thomas (Battlestations: Midway) Lead Designer: Ian Roberts (BBC Climate Challenge) with climate modeling by Prof. To contact us either email info@red-redemption.com , or use the contact form on our website . 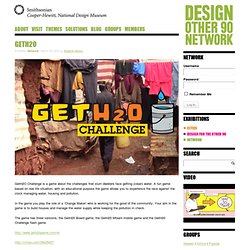 m7red Inundation! "We started working on the game in 2000 after some minor floods hit Buenos Aires," explains Corbalan, who, along with Torroja collaborated with Gustavo Dieguez, Lucas Gilardi, and Daniel Goldaracena. 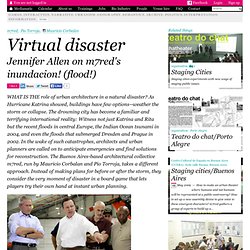 "A few months later, a major flood unleashed a political-technocratic debate in the city. " After consulting advisors ranging from environmental specialists to conceptual artists, the collective--then working under the name m777--created inundacion! Inesperadas posibilidades urbanas para Buenos Aires (flood! Unexpected urban possibilities for Buenos Aires), 2000-2002, a board game in which players respond to a disaster scenario and sometimes even anticipate actual events. "In April 2003, we were playing a session of inundacion! Main Page - Game Design Patterns 2.0. Games for Change 8th Annual Festival, New York City, June 20-22, 2011. On June 22nd, Games for Change presented a series of awards that recognized excellence in “games for change” that address current and pressing social issues. 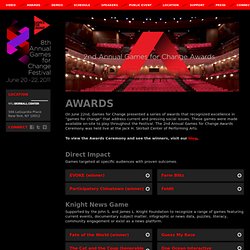 These games were made available on-site to play throughout the Festival. The 2nd Annual Games for Change Awards Ceremony was held live at the Jack H. Skirball Center of Performing Arts. To view the Awards Ceremony and see the winners, visit our blog. Direct Impact Games targeted at specific audiences with proven outcomes. EVOKE (winner) Game type: Massively multiplayer alternate reality and social networking game (web and mobile web-based)Target audience: GeneralDescription: EVOKE is a 10-week “crash course in saving the world.” Knight News Game Supported by the John S. and James L. Fate of the World (winner) Game type: Strategy and simulation (PC)Target audience: Strategy gamers and casual gamers interested in the environmentDescription: Based on the research of Dr.

Learning and Education Transmedia Nominating Panels. Superstruct « the connected world. One of the first things I did after I left my corporate job to start my own company, was I spent 6 weeks playing a game. 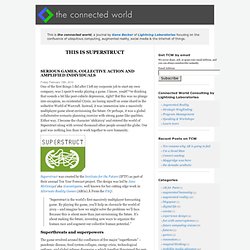 I know, youâ€™re thinking that sounds a bit like post-cubicle depression, right? But this was no plunge into escapism, no existential Crysis, no losing myself on some shard in the seductive World of Warcraft. Instead, it was immersion into a massively multiplayer game about envisioning the future. Or perhaps, it was a global collaborative scenario planning exercise with strong game-like qualities. Either way, I became the character ‘ubik2019′ and entered the world of Superstruct along with several thousand other people around the globe. Crowdsourcing the future: Can alternate reality game Superstruct help save the world? The year is 2019. 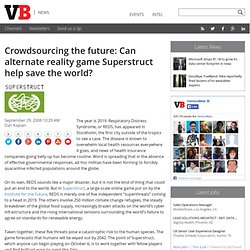 Respiratory Distress Syndrome, or REDS, has appeared in Stockholm, the first city outside of the tropics to see a case. The disease is known to overwhelm local health resources everywhere it goes, and news of health insurance companies going belly up has become routine. Word is spreading that in the absence of effective governmental responses, ad hoc militias have been forming to forcibly quarantine infected populations around the globe. On its own, REDS sounds like a major disaster, but it is not the kind of thing that could put an end to the world.

But in Superstruct, a large-scale online game put on by the Institute for the Future, REDS is merely one of five independent “superthreats” coming to a head in 2019. Urgent Evoke - A crash course in changing the world. World Without Oil. 100 Days Without Oil. This is Your Brain on Video Games (Infographic) Video games get a bad rap: They’re too violent. 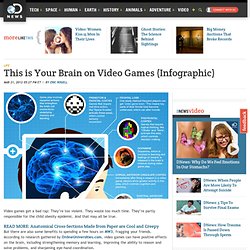 They waste too much time. They’re partly responsible for the child obesity epidemic. And that may all be true. READ MORE: Anatomical Cross-Sections Made from Paper are Cool and Creepy But there are also some benefits to spending a few hours on MW3, fragging your friends. Does that mean you should skip the gym and the Sunday crossword puzzle to find better living through gaming? READ MORE: The Earth – and Its Average Inhabitant – at 7 Billion People (Infographic) (Click image to enlarge.) Image Source For more, follow me @thebachelorguy.