California bungalow gets contemporary extension. How the California Bungalow Became a Popular Australian Home Style. In this renovation, an extension to the rear of the house has created greater space, providing room for an expansive kitchen, dining area and family room. 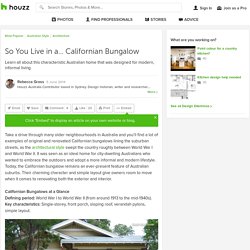 The renovation and styling strikes an effective balance between modernising the bungalow and maintaining its original charm. The use of the Australian hardwood blackbutt for flooring is in keeping with the bungalow’s character and natural materials, while the sleek design of the open-plan kitchen is a subtle and contemporary contrast. Whatever you choose to do, have fun with your bungalow. Their simplicity, space, and character provide renovators with the opportunity to renovate within the original style or get a little inventive.

Planning a bungalow renovation. ARTICLE Trevor Pringle, PHOTOGRAPHY courtesy of BRANZ Bungalows have a distinctive character that can easily be lost or destroyed – so it’s important to understand the home’s unique features and common problems when planning a renovation. 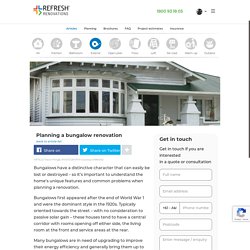 Bungalows first appeared after the end of World War 1 and were the dominant style in the 1920s. Typically oriented towards the street – with no consideration to passive solar gain – these houses tend to have a central corridor with rooms opening off either side, the living room at the front and service areas at the rear. Many bungalows are in need of upgrading to improve their energy efficiency and generally bring them up to the standard expected of 21st century housing. Fence Gallery - Edwardian 1910 - 1920. A distinct change of fashion emerged at this time inherited from the "Art Nouveau" movements of 19th century Europe and at its heart was the "Queen Ann" villa. 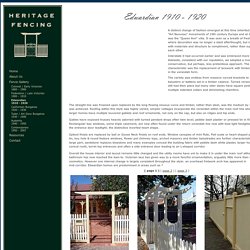 It was seen as a breath of fresh air where decoration was no longer a staid afterthought, but integrated with materials and structure to compliment, rather than supplement each other. Interstate it had occurred earlier and was embraced more fully. In Adelaide, consistent with our reputation, we adopted a more conservative, but perhaps, less pretentious approach. Californian Bungalow 1920 - 1930 - Heritage Fencing. The picket posts break the line in midspan acting as minor feature points. 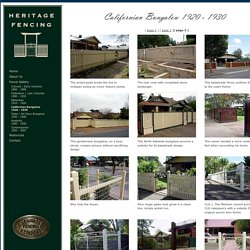 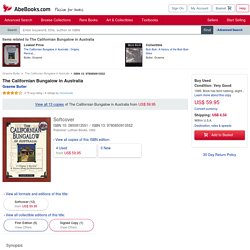 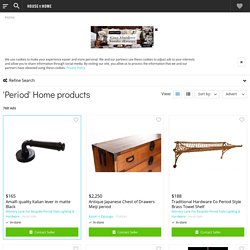 We and our partners use these cookies to adjust ads to your interests and allow you to share information through social media. By visiting our site, you allow us to process the information that we and our partners have obtained using these cookies. Privacy Policy. California Bungalow architectural style in Australia. Parts of Australia, particularly the east coast and some southern regions, share a similar climate to California. 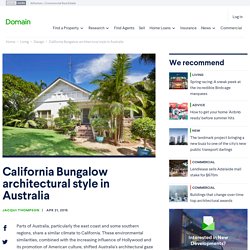 These environmental similarities, combined with the increasing influence of Hollywood and its promotion of American culture, shifted Australia’s architectural gaze from Britain to the US. The decorative Arts and Crafts design movement of the same period also influenced the California Bungalow architecture, which favoured the use of natural materials and championed craftsmanship over industrialised techniques. Frank Lloyd Wright’s designs offer some excellent examples of Arts and Crafts American architecture. California Bungalows follow a simpler floor plan than earlier architectural styles, centred around an entrance hallway and leaning towards open-plan living. Characteristics. 1,360 Californian bungalows Home Design Photos. Best Entrance Door Handles. The Californian Bungalow style of home first began to appear in Australia around 1900 as a low cost, simpler form of housing to suit a rising middle class. 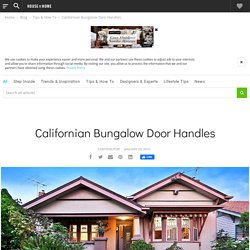 The inner city areas of our capital cities are populated by mainly Victorian style houses which were often co joined to each other. Californian Bungalow Renovation. This striking Spanish Mission brick house in the quiet streets of Elsternwick bears no resemblance to the site it once was when David, Livia and their family purchased it. 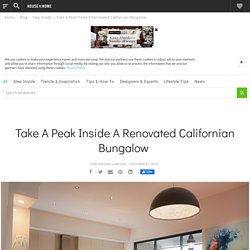 Indeed, it probably takes someone with nine renovations under their belt to have seen the potential of what is now the most charming, meticulously restored – and extended – home. But where others saw rampant weeds, out-of-control trees, little natural light and almost unlivable conditions, David saw quality bones and the prospect of his most masterful renovation yet. 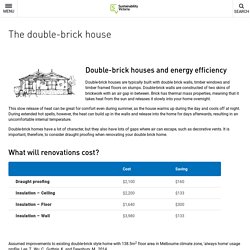 Double-brick walls are constructed of two skins of brickwork with an air gap in between. Brick has thermal mass properties, meaning that it takes heat from the sun and releases it slowly into your home overnight.