Beyoncé's "Black Is King" Hidden Meanings in Fashion and Art. Now that we’ve spotted the notable cameos in Beyoncé’s Black Is King, we’re going to dig a bit deeper into a few cultural moments and hidden meanings you may have missed in the film. 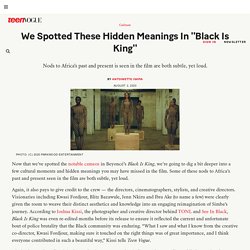 Some of these nods to Africa’s past and present seen in the film are both subtle, yet loud. Again, it also pays to give credit to the crew — the directors, cinematographers, stylists, and creative directors. Visionaries including Kwasi Fordjour, Blitz Bazawule, Jenn Nkiru and Ibra Ake (to name a few) were clearly given the room to weave their distinct aesthetics and knowledge into an engaging reimagination of Simba’s journey. According to Joshua Kissi, the photographer and creative director behind TONL and See In Black, Black Is King was even re-edited months before its release to ensure it reflected the current and unfortunate bout of police brutality that the Black community was enduring. Beyoncé’s ‘Black Is King’: A Guide to the Artists Involved – ARTnews.com. Each time Beyoncé releases new music, it might as well be considered an art-world event too. 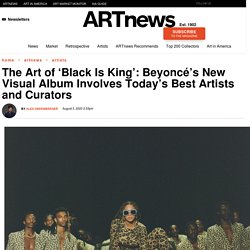 She’s been known to include works by vaunted artists in her videos, and with her husband Jay-Z, she’s built up an important collection of Black art. She’s also been spotted at important exhibitions for the likes of Kerry James Marshall and William N. Copley, and has been shot by some of today’s most important photographers. Her latest endeavor, an 85-minute visual album titled Black Is King that debuted on Disney+ on Friday, is no different in that respect. 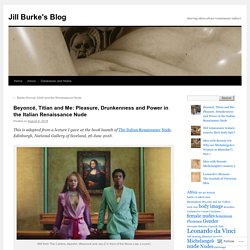 Edinburgh, National Gallery of Scotland, 26 June 2018. Still from The Carters, Apeshit. (Beyoncé and Jay-Z in front of the Mona Lisa, Louvre) As a middle-aged, white, art historian from Leeds, I don’t get compared to Beyoncé as often as I’d like. Art Matters podcast: when Beyoncé goes APES**T. ‘APES**T – THE CARTERS’, music video still Art Matters is the podcast that brings together pop culture and art history, hosted by Ferren Gipson. 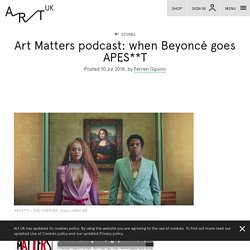 Download and subscribe on iTunes, Stitcher or TuneIn. Museums Must Attract Diverse Visitors or Risk Irrelevance. An art history expert breaks down Beyoncé and JAY-Z’s “APESHIT” video. Beyonce Has Been Masterfully Remixing Art History for Years. Here Are Some of Her Greatest References, Decoded. Musée d’Orsay Puts Focus on Overlooked and Anonymous Black Models in French Masterpieces. A Leonardo Made a $450 Million Splash. Now There’s No Sign of It. Episode 91: Apesh*t — The Art History Babes. What About the Art in “Apesh*t”? The Power and Paradox of Beyoncé and Jay-Z Taking Over the Louvre. Time. Beyoncé and Jay Z stunned the world on June 16 when they dropped their epic new joint album, Everything Is Love and the music video for the track, “Apesh-t.” 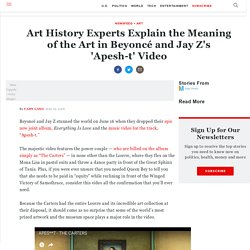 The majestic video features the power couple — who are billed on the album simply as “The Carters” — in none other than the Louvre, where they flex on the Mona Lisa in pastel suits and throw a dance party in front of the Great Sphinx of Tanis. Plus, if you were ever unsure that you needed Queen Bey to tell you that she needs to be paid in “equity” while reclining in front of the Winged Victory of Samothrace, consider this video all the confirmation that you’ll ever need. Because the Carters had the entire Louvre and its incredible art collection at their disposal, it should come as no surprise that some of the world’s most prized artwork and the museum space plays a major role in the video.

Thomas and Drew shared their takes on eight major art moments in the Carters’ “Apeshit” music video below. Leonardo da Vinci, Mona Lisa. Can Beyoncé and Jay-Z's Louvre Video Change Perceptions of Who Belongs in Museums? It was an extraordinary feat: a top-secret mission to shoot a music video in one of the most prestigious museums in the world — a space where the art is incalculably valuable and security is tight. The mission was seamlessly accomplished by pop culture superheroes Beyoncé and Jay-Z. The couple, duly proud of their feat, proclaim repeatedly throughout “Apeshit,” “I can’t believe we made it,” while celebrating and contemplating their range of accomplishments in the most hallowed of European halls. The music video is a true feast for the eyes as beautiful people take over a beautiful place in ways we’ve never seen — because people of color rarely have the opportunity to claim such spaces, a fact that adds to the extraordinariness of the couple’s feat.