16 Feelings Only Men With Oily Skin Will Understand. If you had to get a rupee every time someone asked you 'what’s wrong with your skin', you’ll probably become a millionaire. 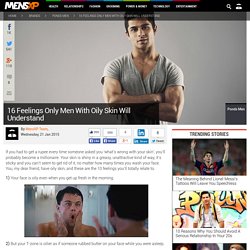 Yes, I saw your message. No, I didn’t reply. And I think that’s okay because the world didn’t end or anything. Whatsapp released an update sometime back which placed a pair of blue ticks beside your message once the other party has seen it. 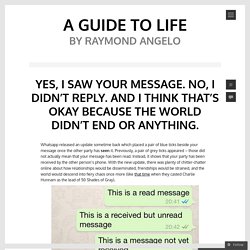 Previously, a pair of grey ticks appeared – those did not actually mean that your message has been read. Instead, it shows that your party has been received by the other person’s phone. With the new update, there was plenty of chitter-chatter online about how relationships would be disseminated, friendships would be strained, and the world would descend into fiery chaos once more (like that time when they casted Charlie Hunnam as the lead of 50 Shades of Gray). 16 Ways To Identify Someone Who Is “Selectively Social” 1. 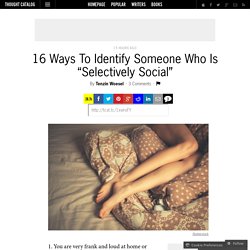 You are very frank and loud at home or when you are with your friends but you turn into a timid shy ball when you are with people you hardly know. 2. 25 Signs That You’re A Mentally Strong Person. I am not ashamed to admit that I am a fan of Star Trek: The Next Generation. 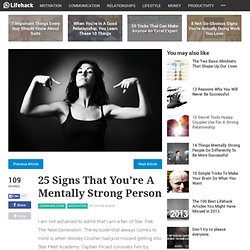 The episode that always comes to mind is when Wesley Crusher had just missed getting into Star Fleet Academy. Captain Picard consoles him by telling him the real measure of a man is what he learns from his mistakes. If you look at real-life historical figures, there are many examples of those that exhibit mental toughness. One that stands out is Teddy Roosevelt. His words and deeds tell the true character he possessed. Teddy Roosevelt. 1. Even in the harshest stress factors, you choose to stay calm and you try to handle situations smoothly. 7 Types of Girls in SIM which Average SIM Guys Can’t Get and Ways To Get Her. Hello Singaporean Companion. 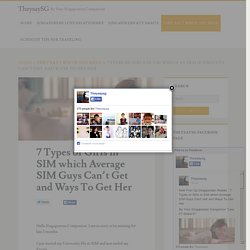 I am so sorry to be missing for last 2 months. I just started my University life in SIM and just ended my Exams. Competition as Motivation - What is Pushing You to Succeed? Competition is a powerful fuel for motivation. 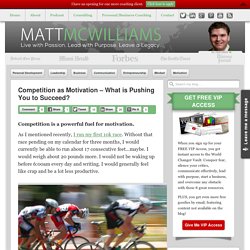 As I mentioned recently, I ran my first 10k race. Without that race pending on my calendar for three months, I would currently be able to run about 17 consecutive feet…maybe. I would weigh about 20 pounds more. 9 Common Traits Of Happy People (That They Don’t Talk About) Happiness. 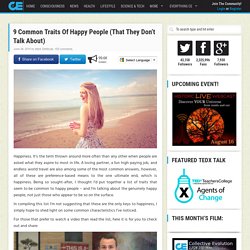 It’s the term thrown around more often than any other when people are asked what they aspire to most in life. A loving partner, a fun high-paying job, and endless world travel are also among some of the most common answers, however, all of these are preference-based means to the one ultimate end, which is happiness. How to tell in 15 minutes whether someone likes you - by Bridget Webber.

32 Totally Not Weird Non-Sexual Fetishes You Might Have. Are You Pushing Yourself Too Hard? 5 Signs of Self-Induced Stress  It's the American way to set goals. 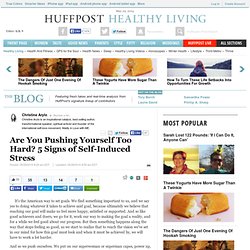 We find something important to us, and we say yes to doing whatever it takes to achieve said goal, because ultimately we believe that reaching our goal will make us feel more happy, satisfied or supported. And so like good achievers and doers, we go for it, work our way to making the goal a reality, and for a while we feel good about our progress. But then something happens along the way that stops feeling so good, as we start to realize that to reach the vision we've set in our mind for how this goal must look and when it must be achieved by, we will have to work a lot harder. And so we push ourselves. We put on our superwoman or superman capes, power up, exhaust ourselves and sacrifice our self-care. The challenge is that most of us don't know we are pushing ourselves too hard until we have already gotten to the "bad place" -- the land of the crabby, the self-critical and the unhappy version of ourselves.

The Apple Game: How Good a Person Are You? I’d like to introduce you to a game I’ve been playing with friends for years.It’s not a game really—more of an exercise. 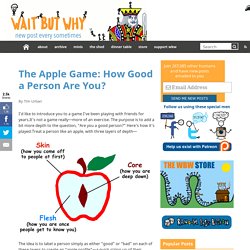 The purpose is to add a bit more depth to the question, “Are you a good person?” Here’s how it’s played:Treat a person like an apple, with three layers of depth— The idea is to label a person simply as either “good” or “bad” on each of these layers to create an “apple profile”—a quick sizing up of their goodness through and through. More about the three layers: Layer 1) The Apple Skin. Scientists have found out why you're chronically late. Thanks to the forest that now covers much of the exclusion zone around Chernobyl, significant amounts of radioactive contamination has been locked into the area. 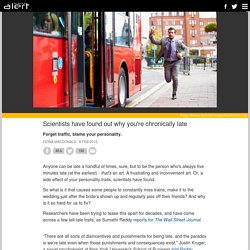 And now researchers say there’s a real risk that it will be released by wildfires, and spread hundreds to thousands of kilometres across Europe. In April 1986, a disaster at the Chernobyl Nuclear Power Plant in Ukraine saw one of its nuclear reactors explode due to faulty design and operation. Thirty-six hours after the explosion, officials started evacuating the Chernobyl residents, and by 1990, more than 350,000 people had been relocated away from the most highly contaminated areas of Belarus, Russia, and Ukraine. What remains from the explosion is a 2,600-km2 area - known as the Chernobyl Exclusion Zone. It's now completely devoid of humans, but large amounts of radioactive contaminants remain. "As trees, grasses, other plants, and fungi transpire (release water), they draw water up from the roots.

Source: New Scientist. How Growing Up in Poverty Rewires a Child’s Developing Brain. 20 Signs You Are Just Not Meant For A 9 To 5 Desk Job. Not all of us are same.

Related:  Reading people   -  Esprits_Critiques_2.0   -  People Stuff   -  SELF IMPROVEMENT   -  Good Reads   -  9 Common Traits Of Happy People (That They Don’t Talk About)   -  How to tell in 15 minutes whether someone likes you - by Bridget Webber   -  The Apple Game: How Good a Person Are You?   -  Being a Human Being, a Person, and a Man   -  General Advices to become an innovator / a creative person   -  patient/person centred care   -  Imminent Threat Solutions | Prevail Against All Threats   -  How to Increase Testosterone Naturally   -  Heading Out on Your Own: 31 Life Skills in 31 Days — Series Wrap-Up | The Art of Manliness   -  There's Something Absolutely Wrong With What We Do To Boys Before They Grow Into Men   -  Education   -  Enterprise