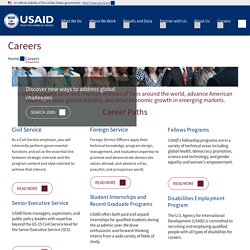 Our long and proud history of helping developing countries and improving quality of life is underpinned by our caring, talented workforce. It is this caring that stands as a hallmark of the Agency and shows the world our true character as a nation. Today, we are the world's premier modern development enterprise, and our 21st Century workforce find themselves doing the best work in the most amazing places, whether it is helping sick people get HIV/AIDS drugs in the most remote parts of Africa, helping farmers learn how to grow crops better in Asia, or teaching people how to govern themselves democratically. USAID employs individuals with a wide variety of technical, managerial and operational skills to achieve our international development objectives. Outcomes Resource Blog. Discharging a client from treatment has made a transformation from a phase of treatment to an element in treatment that requires us to address it at the start of treatment. 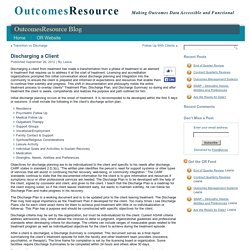 Licensing and accreditation organizations prompted this initial conversation about discharge planning and integration into the community to ensure the client is prepared and informed of expectations and resources that enable them to continue their sobriety and progress. This shift in documentation and philosophy melds the entire treatment process to overlay clients* Treatment Plan, Discharge Plan, and Discharge Summary so during and after treatment the client is aware, comprehends and realizes the purpose and path outlined for him. Committee for Social Workers. MyMercy: Minimum requirements. 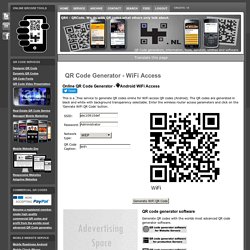 The QR codes are generated in black and white with background transparency selectable. Enter the wireless router access parameters and click on the 'Genrate WiFi QR Code' button. Sharing the QR code generator with others Copy the code below and paste it in your web site or blog so your visitors know where to go to generate QR codes. Note: The free online QR code generators of QR4 are provided 'as is' and are not intended for print production nor commercial use and have no support. Other QR code generators from QR4 A QR code generator to encode URL or Internet web page addresses in a QR code.

Over 1,000 Traditional Cajun Recipes with over 70 photos - RealCajunRecipes.com. Data. Altucher Confidential. Conservatives Big on Fear, Brain Study Finds. Peering inside the brain with MRI scans, researchers at University College London found that self-described conservative students had a larger amygdala than liberals. The amygdala is an almond-shaped structure deep in the brain that is active during states of fear and anxiety. Liberals had more gray matter at least in the anterior cingulate cortex, a region of the brain that helps people cope with complexity. The results are not that surprising as they fit in with conclusions from other studies. Just a year ago, researchers from Harvard and UCLA San Diego reported finding a "liberal" gene . This gene had a tiny effect, however, and worked only for adolescents having many friends.

What It Means There is a big unknown underlying these findings. Similarly, one might ask whether the gray matter difference is affected by exposure to educational challenge, social diversity, or childhood cognitive enrichment. Free Health Screening Services and Health Education. Role of topical peptides in preventing or treating aged skin - Gorouhi - 2009 - International Journal of Cosmetic Science. Signal peptides Signal peptides stimulate matrix protein production in general and collagen synthesis in specific. 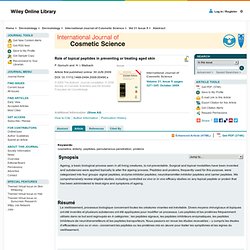 They may be accomplished by stimulation and growth of different skin cells like human skin fibroblasts. Signal peptides can also increase elastin, proteoglycan, glycosaminoglycans and fibronectin proliferation. By increasing matrix cell activities and consequently collagen production, the skin looks firmer and younger. The tripeptide-1 (glycyl-l-histidyl-l-lysine or GHK) is primarily known as carrier peptides. Tripeptide-1 can be also conjugated with palmitic acid and form pal-tripeptide-1 (Biopeptide-CL). Palmitoyl tripeptide-3/5 (Syn®-Coll; Pentapharm, Basel, Switzerland) is a synthetic signal peptide.