Issues with psychological disorders in Singapore

Asians have more conservative and tradition characteristics as compared to the Westerners who tend to be more open and progressive in terms of social lives.

Therefore, when it comes to the subject of psychological health, it is seen that Asians are less likely to talk and relate to one another about it, unlike the Westerners who appreciate the idea of seeing a shrink just to unload their emotional burdens.

There is no doubt that common psychological disorders also exist in Singapore, but because of our culture, we hardly hear people talk about it openly as there is a social stigma that someone is considered mentally unstable as long as there is a need to address a psychological disorder. However, it is important for such concerns to be addressed regardless of how one may be judged by it as our psyche places a huge role in how content are we living our lives. Signs and Symptoms of Mental Health Problems - Causes and Effect.

Mental health problems can cover a broad range of disorders, but the common characteristic is that they all affect the affected person’s personality, thought processes or social interactions. They can be difficult to clearly diagnose, unlike physical illnesses. According to data from SAMHSA, 20 percent of people in America suffer from a form of mental disorder, and 5 percent suffer from a disorder severe enough to affect school, work, or other aspects of daily life. If you think that you or someone you know has a mental disorder, call us today at . What Are the Types of Mental Health Disorders? Mental health disorders occur in a variety of forms, and symptoms can overlap, making disorders hard to diagnoses.

Attention Deficit Hyperactivity Disorder (ADHD) Attention Deficit Hyperactivity Disorder is characterized by an inability to remain focused on task, impulsive behavior, and excessive activity or an inability to sit still. Anxiety/Panic Disorder Bipolar Disorder Depression Schizophrenia. Mental Health & Stigma. There are still attitudes within most societies that view symptoms of psychopathology as threatening and uncomfortable, and these attitudes frequently foster stigma and discrimination towards people with mental health problems. 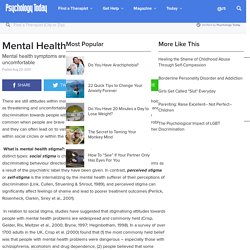 Why does stigma matter? Considerable stigma against mental illness: Study. SINGAPORE — An Institute of Mental Health (IMH) study has found a common perception here that those with mental illness can get better if they wanted to and that their condition is a sign of personal weakness. Researchers behind the study said this suggests “considerable” stigma towards individuals with mental illness.

The stigma could hinder such individuals from seeking treatment out of fear of being associated with a disorder. The mental health literacy study spanning one year started in March last year and involved about 3,000 adult residents aged between 18 and 65. It examined how well people could recognise five common mental disorders — alcohol abuse, dementia, Major Depressive Disorder (MDD), Obsessive Compulsive Disorder (OCD) and schizophrenia — and their beliefs towards these conditions. To measure stigma, researchers used scales to gauge people’s attitudes towards the individual suffering from a mental illness, as well as how willing they are to spend time with such persons. 6 common mental disorders affecting Singaporeans today and where you can go to get help, Business Insider - Business Insider Singapore.

Pexels There’s been an increase in the number of Singapore adults who have suffered from a mental disorder in their lifetimes, the Institute of Mental Health (IMH) said recently. According to a 2016 study, one in seven people in Singapore have experienced specific mood, anxiety, or alcohol use disorders in their lifetime, up from roughly one in eight six years prior. Read also: 1 in 7 people in Singapore have experienced a mental disorder – and some millennials are more susceptible to mood and alcohol-related ones Part of the study’s findings is the alarming revelation that most of these sufferers (more than three-quarters) have never sought any professional help for their illnesses.

Where to get help Beyond IMH and other hospitals that provide psychiatric care, General Practitioners (GPs) and polyclinics can be a first touchpoint for those who think they have a mental health issue. . #1 – Major depressive disorder Singapore Press Holdings #2 – Alcohol abuse #4 – Generalised anxiety disorder.