Against Health. Your purchase has been completed. 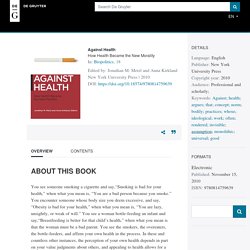 Your documents are now available to view. Changing the currency will empty your shopping cart. Against Health How Health Became the New Morality. Therapeutic Misconception. Teck-Chuan Voo is a research fellow at the Centre for Biomedical Ethics, Yong Loo Lin School of Medicine, National University of Singapore (NUS), Singapore. 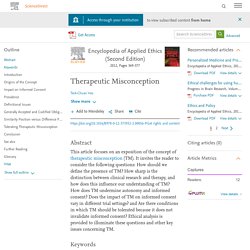 He is involved in designing and evaluating the NUS medical ethics undergraduate integrated curriculum and has lectured on public health ethics, bioethics in Asia, and dental ethics. He has served as a rapporteur for a World Health Organization meeting on ‘Research Ethics in International Epidemic Response.’ His research interests in the field of bioethics are organ donation, care for the aged, public health, and research ethics. In philosophy, he has a long-standing interest in theories of moral agency and Confucianism. He has published in various peer-reviewed journals and has contributed to books on medical ethics education. Copyright © 2012 Elsevier Inc. 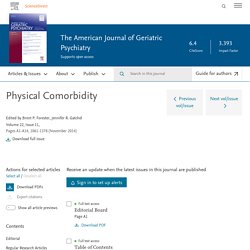 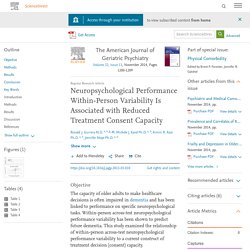 Within-person across-test neuropsychological performance variability has been shown to predict future dementia. Methods Participants completed a neuropsychological test battery and a standardized capacity assessment. Results. The mother of all drug battles. Radical embodied cognition: an interview with Andrew Wilson. The computational approach is the orthodoxy in psychological science. 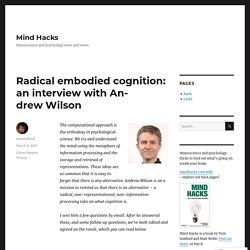 The free will rebellion. A popular mantra of modern neuroscience tells us that free will is an illusion. 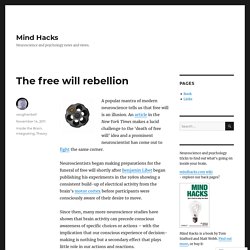 An article in the New York Times makes a lucid challenge to the ‘death of free will’ idea and a prominent neuroscientist has come out to fight the same corner. Neuroscientists began making preparations for the funeral of free will shortly after Benjamin Libet began publishing his experiments in the 1980s showing a consistent build-up of electrical activity from the brain’s motor cortex before participants were consciously aware of their desire to move. Since then, many more neuroscience studies have shown that brain activity can precede conscious awareness of specific choices or actions – with the implication that our conscious experience of decision-making is nothing but a secondary effect that plays little role in our actions and reactions. Building on brain clich√©s. 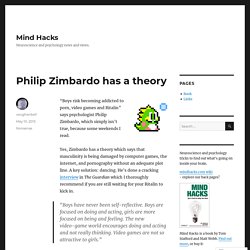 Yes, Zimbardo has a theory which says that masculinity is being damaged by computer games, the internet, and pornography without an adequate plot line. A key solution: dancing. He’s done a cracking interview in The Guardian which I thoroughly recommend if you are still waiting for your Ritalin to kick in. “Boys have never been self-reflective. Boys are focused on doing and acting, girls are more focused on being and feeling. Not really thinking? Numbers up for dopamine myth. I’ve just read an elegant study on the neuroscience of gambling that wonderfully illustrates why the dopamine equals pleasure myth, so often thrown around by the media, is too tired to be useful. 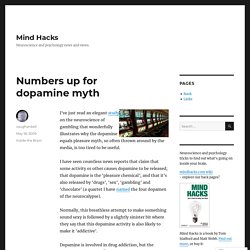 I have seen countless news reports that claim that some activity or other causes dopamine to be released; that dopamine is the ‘pleasure chemical’; and that it’s also released by ‘drugs’, ‘sex’, ‘gambling’ and ‘chocolate’ (a quartet I have named the four dopamen of the neurocalypse). Normally, this breathless attempt to make something sound sexy is followed by a slightly sinister bit where they say that this dopamine activity is also likely to make it ‘addictive’. Dopamine is involved in drug addiction, but the over-extended clich√© is drivel, not least because the dopamine neurons start firing in the nucleus accumbens when any reward is expected. Dopamine in Motivational Control: Rewarding, Aversive, and Alerting: Neuron. The ‘side effects’ of medicalization: A meta-analytic review of how biogenetic explanations affect stigma.

Biogenetic explanations and stigma: A meta-analytic review of associations among laypeople. A coming revolution walks a fine line. The Chronicle of Higher Education has an excellent in-depth article on the most likely candidate for a revolution in mental health research: the National Institute of Mental Health’s RDoC or Research Domain Criteria project. 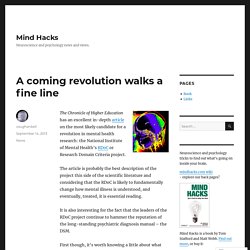 The article is probably the best description of the project this side of the scientific literature and considering that the RDoC is likely to fundamentally change how mental illness is understood, and eventually, treated, it is essential reading. It is also interesting for the fact that the leaders of the RDoC project continue to hammer the reputation of the long-standing psychiatric diagnosis manual – the DSM.

First though, it’s worth knowing a little about what the RDoC actually is. Why we need to get better at critiquing psychiatric diagnosis. This piece is based on my talk to the UCL conference ‘The Role of Diagnosis in Clinical Psychology’. 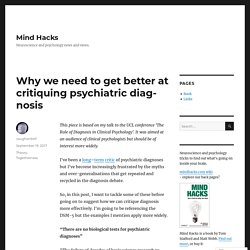 Clinical situations where mental processes act as a major factor affecting medical outcomes are areas where psychosomatic medicine has competence.[2] Psychosomatic disorders[edit] Connotations of the term "psychosomatic illness"[edit] Lexicon of alcohol and drug terms published by the World Health Organization. Qualia. Self-determination. Cardinal principle in modern international law principles of international law The right of a people to self-determination is a cardinal principle in modern international law (commonly regarded as a jus cogens rule), binding, as such, on the United Nations as authoritative interpretation of the Charter's norms.[1][2] It states that people, based on respect for the principle of equal rights and fair equality of opportunity, have the right to freely choose their sovereignty and international political status with no interference.[3] The concept was first expressed in the 1860s, and spread rapidly thereafter.[4][5] During and after World War I, the principle was encouraged by both Soviet Premier Vladimir Lenin and United States President Woodrow Wilson.[4][5] Having announced his Fourteen Points on 8 January 1918, on 11 February 1918 Wilson stated: "National aspirations must be respected; people may now be dominated and governed only by their own consent.

Coercive interventions. Home - CASP - Critical Appraisal Skills Programme. Overcoming injustice in mental health: is there a role for philosophy? Tandfonline. Epistemic injustice in mental health policy. Pharmacological Abuse. « Back to Guides & Papers This chapter is from Dr. David Healy’s book, Psychiatric Drugs Explained. When chlorpromazine was first introduced, doctors prescribed and patients took what they were given. Pharmacological Abuse.