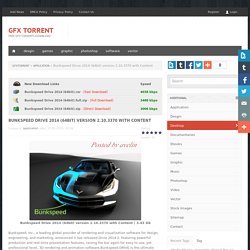 It enables car designers, decision makers and marketers to have the highest quality design visualization with the greatest efficiency earlier in the process all the way to final results, which translates to dramatic savings. Following suit, DRIVE delivers an elegant, simple, fast interface thats intuitive and easy to learn. It is production ready for automotive and transportation visualization as early as design review or for final marketing communication imagery. (All below links are interchangable. New “Fast” Render Mode in Bunkspeed 2014 Accelerates Real-time Rendering. 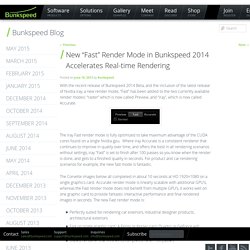 The iray Fast render mode is fully optimized to take maximum advantage of the CUDA cores found on a single Nvidia gpu. Where iray Accurate is a consistent renderer that continues to improve in quality over time, and offers the best in all rendering scenarios without settings, iray “Fast” is set to finish after 100 passes so you know when the render is done, and gets to a finished quality in seconds. For product and car rendering scenarios for example, the new fast mode is fantastic. The Corvette images below all completed in about 10 seconds at HD 1920×1080 on a single graphics card. New “Fast” Render Mode in Bunkspeed 2014 Accelerates Real-time Rendering. The Real-time Rendering Engine - Mizuchi - Silicon Studio. An array of technology to support new levels of graphical creation It is becoming necessary to have a wide range of top quality techniques such as shading, post processing effects and lighting in real-time rendering solutions for the current generation.

Mizuchi is a real-time rendering graphics middleware that brings together technology at the highest level. With physically based rendering, movie level post processing effects and high resolution material technology which stands up to close inspection, makes it possible to achieve new heights in graphics. VRED Real-Time Rendering. Real Time Rendering With Marmoset Toolbag. This tutorial is about capturing a beautiful real time render of your game art ready asset. 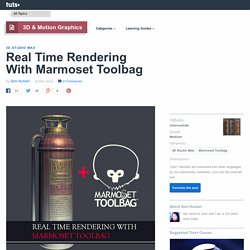 This tutorial is a follow up tutorial of Create a Game Ready Fire Extinguisher with 3D Studio Max series. In the previous tutorial, I showed you how to model and texture a low poly fire extinguisher. In this part, you will learn the working interface of the Marmoset Toolbag. First of all, you have to export the fire extinguisher mesh from 3d software (Maya/Max).

I choose .FBX file format for exporting the mesh. Reset xForm or freeze transformation and center pivot pointUnlock normalsSeparate objects according to the material id. You can check the normals of the object in 3ds Max by applying Edit Normals modifier. Open Marmoset Toolbag software. You can see the cylinder with its pivot point in the Marmoset viewport. Once you import the mesh, you can see its name, properties and other file information in the scene box. In the right corner, you can see the material box. Octane Render: realtime ray tracing. OTOYs Octane renderer was previewed in fxguide's Art of Rendering article in the middle of last year. 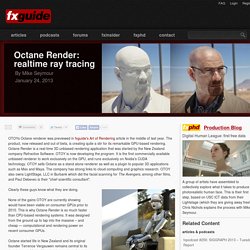 The product, now released and out of beta, is creating quite a stir for its remarkable GPU-based rendering. Octane Render is a real-time 3D unbiased rendering application that was started by the New Zealand company Refractive Software. OTOY is now developing the program. It is the first commercially available unbiased renderer to work exclusively on the GPU, and runs exclusively on Nvidia's CUDA technology. OTOY sells Octane as a stand alone renderer as well as a plugin to popular 3D applications such as Max and Maya. Clearly these guys know what they are doing. None of the gains OTOY are currently showing would have been viable on consumer GPUs prior to 2010. FurryBall - Incredibly fast GPU render. FluidRay RT - 3D rendering. Real-Time, Photorealistic-Rendering with A360 - Render Them Speechless. We’ve been hard at work developing a new feature for the Autodesk A360 set called Interactive Rendering. 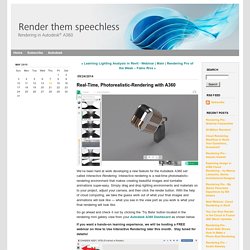 Interactive rendering is a real-time photorealistic-rendering environment that makes creating beautiful images and turntable animations super-easy. Simply drag and drop lighting environments and materials on to your project, adjust your camera, and then click the render button. With the help of cloud computing, we take the guess work out of what your final images and animations will look like — what you see in the view port as you work is what your final rendering will look like. So go ahead and check it out by clicking the ‘Try Beta’ button located in the rendering mini gallery view from your Autodesk A360 Dashboard as shown below. If you want a hands-on learning experience, we will be hosting a FREE webinar on How to Use Interactive Rendering later this month.