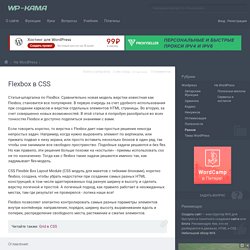 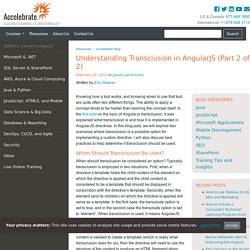 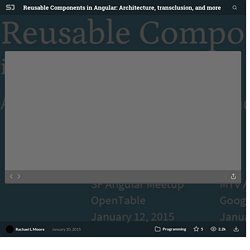 I'd like to welcome you to tonight's Angular meetup. A Guide To Transclusion in AngularJS. I've always had a problem with transclusion. 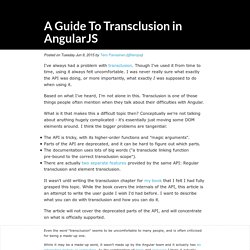 Though I've used it from time to time, using it always felt uncomfortable. I was never really sure what exactly the API was doing, or more importantly, what exactly I was supposed to do when using it. Atomic Design by Brad Frost. Talk is cheap. 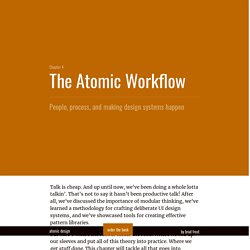 And up until now, we’ve been doing a whole lotta talkin’. That’s not to say it hasn’t been productive talk! After all, we’ve discussed the importance of modular thinking, we’ve learned a methodology for crafting deliberate UI design systems, and we’ve showcased tools for creating effective pattern libraries. But here’s where the rubber meets the road. Creating an Angular 7 Application with ASP.NET Core. ScaffAngular - Plugins. AngularJS Workflow in WebStorm. WebStorm 8 introduces a slew of new AngularJS features. 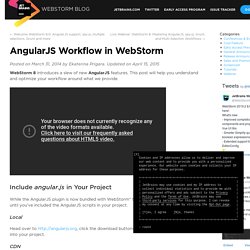 This post will help you understand and optimize your workflow around what we provide. Include angular.js in Your Project While the AngularJS plugin is now bundled with WebStorm* the AngularJS features don’t kick in until you’ve included the AngularJS scripts in your project. Local Head over to click the download buttons, then move the angular.js script into your project. If you prefer to use a CDN, place the cursor over the highlight library name, hit Alt+Enter, and Download Library. Libraries can be reconfigured later under Settings | JavaScript | Libraries.

Лучшие советы для разработки в WebStorm Angular приложений: использование CLI и другие секреты. AngularJS Workflow in WebStorm. Where Should Model State Be Stored In Angular.js. Don’t clone Back-End models in Angular. Data flow from API to the DOM: unexpected, unpredictable bugs of the naif implementation In order to know what we are doing and analyse the new implementation, we need to have at least a general idea about how change detection algorithm works. 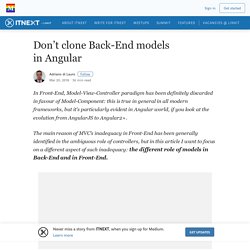 I am not going to go much into details: if you want a deeper read, I suggest you this great article about change detection in general, and this other one about DOM interpolation. Change detection uses a recursive algorithm: Even if this was a very simplified description of change detection algorithm, it has something more than most descriptions you’ll find online, because it focuses on the recursive nature of the algorithm, which is often ignored.

In fact, recursiveness is the core of the change detection process, specifically the ability of deciding how to update a component, only based on its status and the status of the parent component. Don’t clone Back-End models in Angular. These 5 articles will make you an Angular Change Detection expert. Refactoring Angular Apps to Component Style. Mastering transclusion inside AngularJS Component. Table of contents Introduction Since version 1.5 AngularJS introduced the component way of managing application architecture. 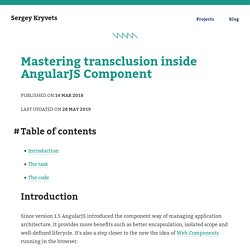 It provides more benefits such as better encapsulation, isolated scope and well-defined lifecycle. It's also a step closer to the new the idea of Web Components running in the browser. However, it has a lack of documentation for components, since for a long time there were only directives. The task In order to demonstrate the approach let's assume that we're working on "market app". Error handling in long Promise chains – Arthur Xavier. With a little more experience and understanding of Promises and the monadic laws that govern its use, we wouldn’t have spent so much time working on the refactor of this piece of code. 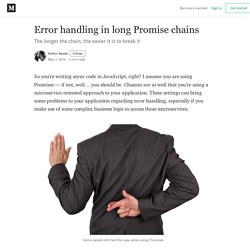 In JavaScript, asynchronous code can be handled via Promises, which are the Continuation monads of JavaScript. The most important thing in this case about Promises being a monad is that the following law is true: Promise.resolve(Promise.resolve(x)) === Promise.resolve(x). And more important than the one above, this one also holds for any value x: Components and Multiple Transclusion in Angular 1.5. With the release of Angular 2, one could thing we are all done withversion 1, different but the Angular team keep surprising us with new features and improvements for all of us who still keep our hopes in thisinstance of the framework. 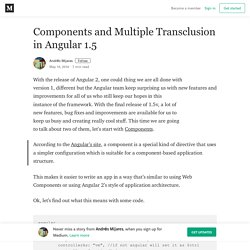 With the final release of 1.5v, a lot ofnew features, bug fixes and improvements are available for us tokeep us busy and creating really cool stuff. This time we are goingto talk about two of them, let's start with Components. According to the Angular’s site, a component is a special kind of directive that uses a simpler configuration which is suitable for a component-based application structure. Компоненты Angular: неудачные примеры использования. От автора: Angular – удивительный инструмент.

This article was peer reviewed by Mark Brown and Jurgen Van de Moere. Thanks to all of SitePoint’s peer reviewers for making SitePoint content the best it can be! 2017.01.10: The article was updated to clarify the section on one-way binding, and add information on one-time bindings. Creating Highly Reusable AngularJS Components – The Startup Lab. Preparing your AngularJS app for Angular No question if you are going to build a new app today you might start off with Angular built on Typescript (Angular 2+). However, with thousands of AngularJS (Angular 1.X) apps still in production, AngularJS isn’t going anywhere just yet. In fact, AngularJS still sees continued development and support from the team. Components and Multiple Transclusion in Angular 1.5.