“Drones are not a security solution” Robert Greenwald, head of the progressive internet video and documentary film company, Brave New Films, recently traveled to Pakistan, supported financially by hundreds of BNF donors, to witness firsthand the stories of families who have had innocent loved ones killed by U.S. drone attacks. 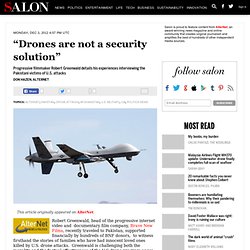 Drones Alone Are Not the Answer. OVER the past two years, America has narrowed its goals in Afghanistan and Pakistan to a single-minded focus on eliminating Al Qaeda. 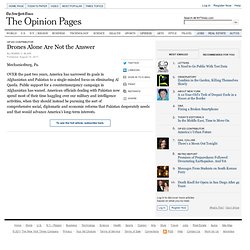 Public support for a counterinsurgency campaign in Afghanistan has waned. American officials dealing with Pakistan now spend most of their time haggling over our military and intelligence activities, when they should instead be pursuing the sort of comprehensive social, diplomatic and economic reforms that Pakistan desperately needs and that would advance America’s long-term interests. USA urged to clarify basis for drone killings in Pakistan. Pay Afghanistan, Boost Drone Strikes In Pakistan, Experts Tell House. CAPITOL HILL: The US must not go ahead with planned cuts to the Afghan National Army and police, a panel of experts urged the House Armed Services Committee today. 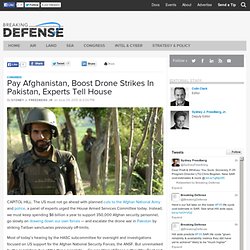 Instead, we must keep spending $6 billion a year to support 350,000 Afghan security personnel, go slowly on drawing down our own forces — and escalate the drone war in Pakistan by striking Taliban sanctuaries previously off-limits. Most of today’s hearing by the HASC subcommittee for oversight and investigations focused on US support for the Afghan National Security Forces, the ANSF. But unremarked by the legislators, two of the three panelists — Savage Wars of Peace author Max Boot and retired Vice Chief of Army Staff Gen. Jack Keane — called for drone strikes against the suspected Taliban leadership base in Quetta.

Approached by Breaking Defense after the hearing, both Boot and Keane confirmed that they were calling for an escalation. Gen. Indeed, it might be cheaper to pay Afghans than to fight them, said Boot. Drone War Spurs Pakistan Militants to Deadly Reprisals. WikiLeaks Cable: Pakistan Asked for More, Not Fewer Drones. At the same time the Pakistani public was decrying the CIA's use of drone strikes in their country, Pakistan's top army general was asking a top U.S. official in behind-the-scenes meetings for more drones to help during military operations, according to a leaked U.S. 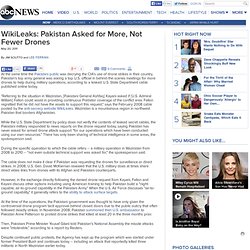 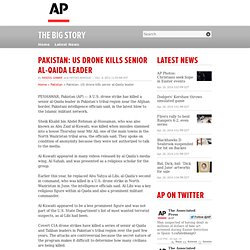 Sheik Khalid bin Abdel Rehman al-Hussainan, who was also known as Abu Zaid al-Kuwaiti, was killed when missiles slammed into a house Thursday near Mir Ali, one of the main towns in the North Waziristan tribal area, the officials said. They spoke on condition of anonymity because they were not authorized to talk to the media. US drone attacks: CIA chiefs face arrest over horrific evidence of bloody 'video-game' sorties. By David Rose Published: 23:30 GMT, 20 October 2012 | Updated: 09:57 GMT, 21 October 2012 The Mail on Sunday today reveals shocking new evidence of the full horrific impact of US drone attacks in Pakistan. 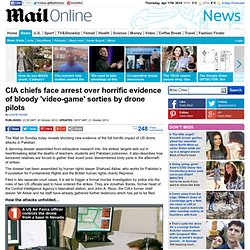 A damning dossier assembled from exhaustive research into the strikes’ targets sets out in heartbreaking detail the deaths of teachers, students and Pakistani policemen. It also describes how bereaved relatives are forced to gather their loved ones’ dismembered body parts in the aftermath of strikes. The dossier has been assembled by human rights lawyer Shahzad Akbar, who works for Pakistan’s Foundation for Fundamental Rights and the British human rights charity Reprieve. Filed in two separate court cases, it is set to trigger a formal murder investigation by police into the roles of two US officials said to have ordered the strikes.

Drones in Pakistan: Out of the blue. Voices for Creative Nonviolence. By Dan Pearson and Kathy Kelly October 21, 2009 Five months ago, shortly after the Pakistani government had begun a military offensive against suspected Taliban fighters in the northernmost area of the country, we arrived in Islamabad, the capital, as part of a small delegation organized by Voices for Creative Nonviolence (www.vcnv.org). 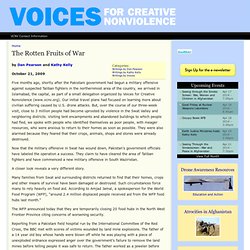 Our initial travel plans had focused on learning more about civilian suffering caused by U.S. drone attacks. But, over the course of our three-week visit, close to 3 million people had become uprooted by violence in the Swat Valley and neighboring districts. Visiting tent encampments and abandoned buildings to which people had fled, we spoke with people who identified themselves as poor people, with meager resources, who were anxious to return to their homes as soon as possible.

Now that the military offensive in Swat has wound down, Pakistan’s government officials have labeled the operation a success. A closer look reveals a very different story. Dr. Obama victory infuriates Pakistani drone victims. Drone attacks in Pakistan. Since 2004, the United States government has attacked hundreds of targets in Northwest Pakistan using unmanned aerial vehicles (drones) controlled by the Central Intelligence Agency's Special Activities Division.[4] Most of these attacks are on targets in the Federally Administered Tribal Areas along the Afghan border in Northwest Pakistan. 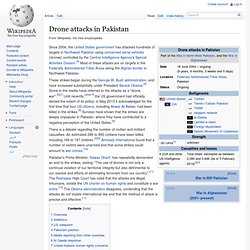 These strikes began during the George W. Bush administration, and have increased substantially under President Barack Obama.[5] Some in the media have referred to the attacks as a "drone war".[6][7] Until recently,[when?] Drone Strikes: Map Shows Pakistan Drone Strikes. CREECH AIR FORCE BASE, NV - AUGUST 08: An MQ-9 Reaper flies by on a training mission August 8, 2007 at Creech Air Force Base in Indian Springs, Nevada. The Reaper is the Air Force's first "hunter-killer" unmanned aerial vehicle (UAV) and is designed to engage time-sensitive targets on the battlefield as well as provide intelligence and surveillance.

The jet-fighter sized Reapers are 36 feet long with 66-foot wingspans and can fly for as long as 14 hours fully loaded with laser-guided bombs and air-to-ground missiles. They can fly twice as fast and high as the smaller MQ-1 Predators reaching speeds of 300 mph at an altitude of up to 50,000 feet. The aircraft are flown by a pilot and a sensor operator from ground control stations. U.S. drone strikes in Pakistan. CIA drone war in Pakistan in sharp decline. Authors: America's drone war in Pakistan is much diminishedThey say it's a victim of a deeply troubled relationship between U.S., PakistanU.S. raid on bin Laden and other incidents sparked anger from Pakistanis, they sayDrones have killed many al Qaeda leaders, and some targets are low level, they say Editor's note: Peter Bergen, CNN's national security analyst, is a director at the New America Foundation. 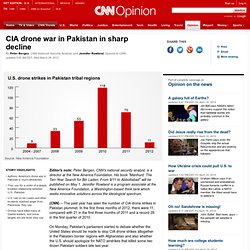 His book "Manhunt: The Ten-Year Search for Bin Laden; From 9/11 to Abbottabad" will be published on May 1. Jennifer Rowland is a program associate at the New America Foundation, a Washington-based think tank which seeks innovative solutions across the ideological spectrum. PakistanDroneStrikesMap.