Over nearly 80 years, Harvard study has been showing how to live a healthy and happy life. He recorded his TED talk, titled “What Makes a Good Life? 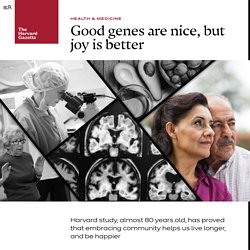 Lessons from the Longest Study on Happiness,” in 2015, and it has been viewed 13,000,000 times. The researchers also found that marital satisfaction has a protective effect on people’s mental health. Part of a study found that people who had happy marriages in their 80s reported that their moods didn’t suffer even on the days when they had more physical pain. Those who had unhappy marriages felt both more emotional and physical pain. Those who kept warm relationships got to live longer and happier, said Waldinger, and the loners often died earlier. According to the study, those who lived longer and enjoyed sound health avoided smoking and alcohol in excess. In part of a recent study, researchers found that women who felt securely attached to their partners were less depressed and more happy in their relationships two-and-a-half years later, and also had better memory functions than those with frequent marital conflicts.

Spel gör det skolan har svårt att lyckas med – Spellärarens artikel i Horisonten.io. In Defense of Computers in the Classroom – A.J. JULIANI. I didn’t think I would have to write this post. 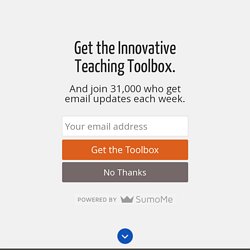 But apparently someone needs to write it. This past week a highly acclaimed organization (NPR) put out a story where a college professor denounces the use of computers in the classroom, based on the research of “taking notes by hand vs taking notes on a device” (and then how well those students did on a multiple choice test). First, let me say that this post is NOT going to be about: Taking notes by hand vs taking notes on a deviceHow well technology prepares students for multiple choice tests Those arguments are for somewhere else. In the aforementioned NPR article, “Is it time to ban computers in the classroom?” This bounty of choices, and the multitasking that often ensues, may be the very problem that drives some instructors to ban devices altogether. The rest of the article seeks to support these claims that computers might be a bad idea in the classroom.

Computers are about creative opportunities, not consumption and recall Awesome! Stay on the Bus: The Proven Path to Doing Unique Work. In June of 2004, Arno Rafael Minkkinen stepped up to the microphone at the New England School of Photography to deliver the commencement speech. 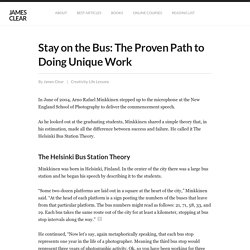 As he looked out at the graduating students, Minkkinen shared a simple theory that, in his estimation, made all the difference between success and failure. He called it The Helsinki Bus Station Theory. The Helsinki Bus Station Theory Minkkinen was born in Helsinki, Finland. In the center of the city there was a large bus station and he began his speech by describing it to the students. Classroom Furniture: Does it impede or improve learning? *Donate to my Donor’s Choose Project: Any donations made before May 17th qualify for a dollar to dollar match when donors use the code LIFTOFF during check out. 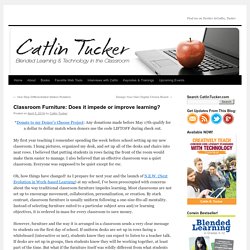 My first year teaching I remember spending the week before school setting up my new classroom. I hung pictures, organized my desk, and set up all of the desks and chairs into neat rows. I believed that putting students in rows facing the front of the room would make them easier to manage. I also believed that an effective classroom was a quiet classroom. Everyone was supposed to be quiet except for me. Oh, how things have changed! Paljon puhetta digitalisaatiosta. Mikko Saari - ajatuksia johtamisesta, opetuksesta ja kasvatuksesta: Tutkiva opettajuus: avain jäntevään koulun kehittämiseen ja opettajien ammatilliseen kasvuun.

Katso kun opin. Måste undervisningen förändras? 5 attributes that are crucial for success in the 21st century. We can no longer assume that being ‘in work’ is the same thing as being employed – ‘having a job’. 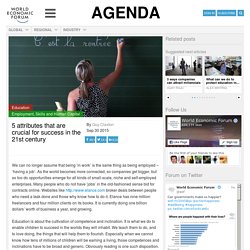 As the world becomes more connected, so companies get bigger, but so too do opportunities emerge for all kinds of small-scale, niche and self-employed enterprises. Many people who do not have ‘jobs’ in the old-fashioned sense bid for contracts online. En berättelse om ledarskap i klassrummet: Venue: Lärarutbildning: Linköpings universitet. Mobiluck - Mobiiliopetusteknologia lukiolaisen arjessa. New Teachers: Designing Learning Environments. The Importance of Classroom Design Why does the physical design of classrooms matter? 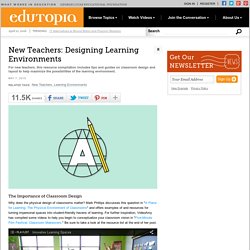 Mark Phillips discusses this question in "A Place for Learning: The Physical Environment of Classrooms" and offers examples of and resources for turning impersonal spaces into student-friendly havens of learning. For further inspiration, VideoAmy has compiled some videos to help you begin to conceptualize your classroom vision in "Five-Minute Film Festival: Classroom Makeovers. " Be sure to take a look at the resource list at the end of her post. Learning Zones, Seating, and More For advice about seating arrangements, bulletin boards, and other considerations, Todd Finley has written a helpful overview of some factors to consider related to your classroom design, including information about the research, and links to video tours of exemplary elementary, middle, and high school classrooms.

Other Factors to Consider Does your classroom design take into account opportunities for student creativity? Meet Learner 2.0.