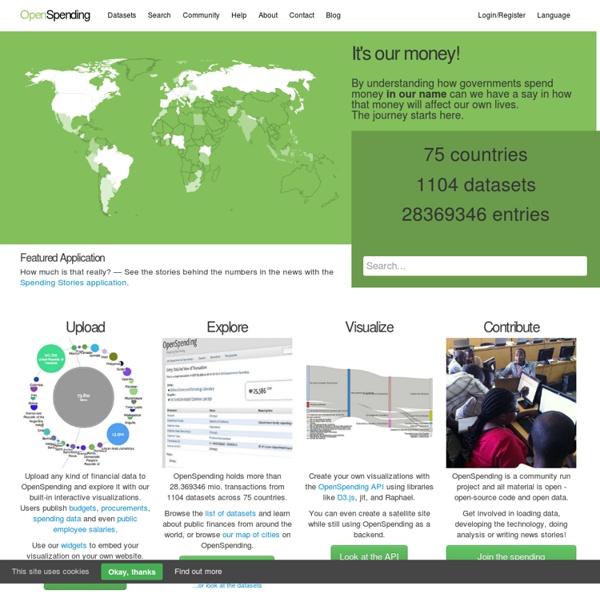 Visualize Create your own visualizations with the OpenSpending API using libraries like D3.js, jit, and Raphael. You can even create a satellite site while still using OpenSpending as a backend. Look at the API Contribute OpenSpending is a community run project and all material is open - open-source code and open data.

Data Science Toolkit Usage Command Line on OS X and Linux Download python_tools.zip, extract into a new folder, cd into it and run . Online Charts Builder Hohli Online Charts Builder Load From Image URL: Chart Data can't equal to original, but very similar to it. Wealth Management Another week of mixed economic news did not deter equity markets from climbing. The Standard & Poor’s 500 finished last week at a record high of 1859, the Dow Jones Av-erage closed at 16,321, and the Nasdaq Composite ended at 4308. Contrary to expectations that interest rates might rise sharply as the Fed pulled back from its bond buying program, the ten-year Treasury finished the week with a yield of 2.65% Crude oil was up to 102.59, and gold is staging a comeback after a disappoint-ing 2013 – closing at 1328.20. Consumer confidence was up in January, but GDP growth was revised downward to 2.4% for the fourth quarter of 2013. Initial estimates were closer to 3.2%. The Com-merce Department will issue its final fourth quarter numbers at the end of March.

Political activities of the Koch brothers The political activities of the Koch brothers include the financial and political influence of Charles G. and David H. Koch on United States politics. This influence is seen both directly and indirectly via various advocacy and lobbying organizations in which they have an interest.[1][2] The Koch brothers are the sons of Fred C. Koch, who founded Koch Industries, the second-largest privately held company in the United States, of which they own 84%.[3] Having bought out two other brothers' interests, they remain in control of the family business, the fortune which they inherited from their father, and the Koch Family Foundations. The brothers have heavily contributed to libertarian and conservative think tanks and campaigns.

ited Nations Statistics Division New York, 1 June 2016 - The chair of the Statistical Commission, Ms. Wasmalia Bivar of Brazil, addressed the Economic and Social Council (ECOSOC) on 1 June during its Coordination and Management Meeting. Ms. Bivar, who provided her briefing by videolink, informed the Council that the Statistical Commission at its last session in March had agreed “as a practical starting point” on a global indicator framework, which had been developed by the Inter-agency and Expert Group on Sustainable Development Goal Indicators (IAEG-SDGs). Famous Perl One-Liners Explained, Part I: File Spacing Hi all! I am starting yet another article series here. Remember my two articles on Famous Awk One-Liners Explained and Famous Sed One-Liners Explained? They have received more than 150,000 views total and they attract a few thousand new visitors every week. Inspired by their success, I am going to create my own perl1line.txt file and explain every single oneliner in it.

VisIt About VisIt VisIt is an Open Source, interactive, scalable, visualization, animation and analysis tool. From Unix, Windows or Mac workstations, users can interactively visualize and analyze data ranging in scale from small (<101 core) desktop-sized projects to large (>105 core) leadership-class computing facility simulation campaigns. Users can quickly generate visualizations, animate them through time, manipulate them with a variety of operators and mathematical expressions, and save the resulting images and animations for presentations.

A Thanksgiving Cornucopia of Wrongest Products We could almost throw in the 1000 thread count towel and just admit we’ve been insurmountably topped in the Wrongest Product Awards competition. First came the suggestion from a reader following our nomination of the lighted pillow spied in a local outpost of a chain store. (local chain store = oxymoron?)

Money, Power and Wall Street Did the Fed’s Emergency Lending Prop Up “Too Big to Fail”? May 1, 2012, 8:44 pm ET · by Azmat Khan The Obama administration arrived in Washington in early 2009 facing the worst financial crisis since the Great Depression — and an American public outraged by bailouts for the financial institutions that had gotten them there. Pioneer Behind Credit Derivatives is Leaving JPMorgan Home: UK National Statistics Publication Hub Incidence of TB in Cattle, Great Britain - Data to January 2014 Release time: 9:30am Agriculture and Environment | Environment, Food and Rural Affairs | GB Latest national statistics bringing together various sources of statistics relating to the incidence of TB in Cattle, Great Britain according to arrangements approved by the UK Statistics Authority. Regional labour market statistics - April 2014 Labour Market | Office for National Statistics | UK