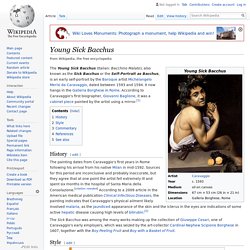 It now hangs in the Galleria Borghese in Rome. According to Caravaggio's first biographer, Giovanni Baglione, it was a cabinet piece painted by the artist using a mirror.[1] History[edit] The painting dates from Caravaggio's first years in Rome following his arrival from his native Milan in mid-1592.

Sources for this period are inconclusive and probably inaccurate, but they agree that at one point the artist fell extremely ill and spent six months in the hospital of Santa Maria della Consolazione. Style[edit] Caravaggio. 16th and 17th-century Italian painter Michelangelo Merisi (Michele Angelo Merigi or Amerighi) da Caravaggio (/ˌkærəˈvædʒioʊ/, US: /-ˈvɑːdʒ(i)oʊ/, Italian pronunciation: [mikeˈlandʒelo meˈriːzi da (k)karaˈvaddʒo]; 28 September 1571[2] – 18 July 1610) was an Italian painter active in Rome, Naples, Malta, and Sicily from the early 1590s to 1610. 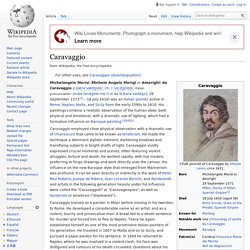 His paintings combine a realistic observation of the human state, both physical and emotional, with a dramatic use of lighting, which had a formative influence on Baroque painting.[3][4][5] Caravaggio employed close physical observation with a dramatic use of chiaroscuro that came to be known as tenebrism. He made the technique a dominant stylistic element, darkening shadows and transfixing subjects in bright shafts of light. Caravaggio: His life and style in three paintings. 1/4 Who Killed Caravaggio ? - Secret Lives of the Artists. Calling of Saint Matthew. Caravaggio's Calling of St. 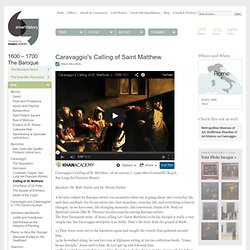 Matthew, oil on canvas, c. 1599-1600 (Contarelli Chapel, San Luigi dei Francesi, Rome) Speakers: Dr. Beth Harris and Dr. Steven Zucker A favorite subject for Baroque artists was moments when one is going about one's everyday life, and then suddenly the divine enters into that mundane, everyday life, and everything is forever changed.

The New Testament story, of Jesus calling Levi (later Matthew) to be his disciple is really a very simple one, but Caravaggio interprets it so richly. 13 Then Jesus went out to the lakeshore again and taught the crowds that gathered around him. 14 As he walked along, he saw Levi son of Alphaeus sitting at his tax-collection booth. Caravaggio (Michelangelo Merisi) (1571–1610) and his Followers. Caravaggio's Calling of St. Matthew, c. 1599-1600. Caravaggio, The Supper at Emmaus, 1601. Chiaroscuro in Painting: The Power of Light and Dark. Chiaroscuro is an art term that’s used quite frequently, but sometimes without an understanding of exactly what it means. 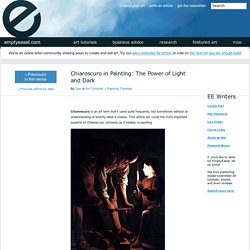 This article will cover the more important aspects of Chiaroscuro, primarily as it relates to painting. The word Chiaroscuro itself is Italian, and roughly means, “light and dark.” It was first used to describe a type of drawing on medium-dark paper where the artist created both darker areas with ink and lighter areas with white paint. Later on the term was used for woodcut prints which essentially did the same thing, using white and black together. When it comes to painting, however, Chiaroscuro truly came to life in the paintings of Caravaggio during the late 16th century. Chiaroscuro. Conversation: 'Caravaggio: a Life Sacred and Profane' A personalized PBS video experience is only a few clicks away. 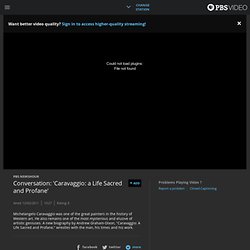 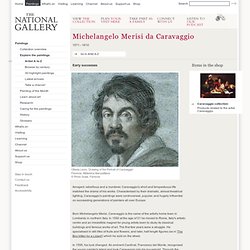 The Complete Caravaggio part one. On the walk from the station, I come through narrow medieval Via dei Tribunali, terrorised by trucks and mopeds, past street stalls laden with the cheapest and best food in Italy. 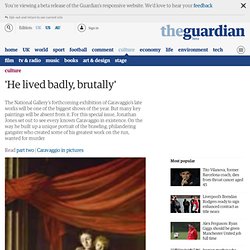 The buildings in the old heart of Naples are blackened, close, menacing. "Infamia", says a poster on a baroque church. Since last October, 40 people have been killed in a war between the city's Camorra gangs. From this tumultuous street a gateway opens on to a 17th-century courtyard where doctors in white coats are joking. In a waiting room, children sit patiently. This is a city that has always lived on prayer. The complete Caravaggio part two. In the room in the Kunsthistorisches Museum that does not have a bust of him above its door, two paintings are attributed to Caravaggio. 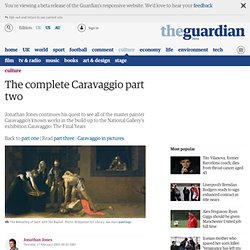 There is a David and Goliath - but though the museum claims this as a Caravaggio, it's more likely a work by one of his followers, that gang of Caravaggisti. It's just not quite tough enough, mentally, to be a Caravaggio - the pose is easy, the boy holding the head vapid. From being forgotten, Caravaggio is now so famous that museums appear to be happy with the flimsiest attribution.

This pseudo-Caravaggio is even pushed as a postcard in the museum shop.