Pleading the Case for Social Media: The Pros and Cons. Those of us who work in social media can’t fathom why someone wouldn’t want to leverage it to promote their brand. 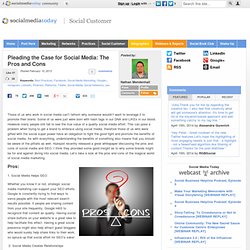 Some of us were just were born with hash tags in our DNA and LIKEs in our blood. However many people still fail to see the true value of a quality social media effort. This can pose a problem when trying to get a brand to embrace using social media, therefore those of us who were gifted with the social super power have an obligation to fight the good fight and promote the benefits of social media. As with everything, understanding the benefits of something also means that you should be aware of the pitfalls as well. Hubspot recently released a great whitepaper discussing the pros and cons of social media and SEO. Pros: 1. Whether you know it or not, strategic social media marketing can support your SEO efforts. 2. ♥ your bitmarks. 12 Major Business Benefits Of The Social Media Revolution. I have been aware of the benefits of social media for a while now and have used this blog as a pulpit and soapbox to shout from this digital hilltop. 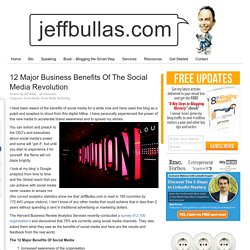 I have personally experienced the power of this new media to accelerate brand awareness and to spread my stories. You can exhort and preach to the CEO’s and executives about social media’s power and some will “get it“, but until you start to experience it for yourself the flame will not blaze brightly. I look at my blog’ s Google analytics from time to time and the Global reach that you can achieve with social media never ceases to amaze me (the current analytics statistics show me that JeffBullas.com is read in 190 countries by 172,443 unique visitors).

I don’t know of any other media that could achieve that in less than 2 years without spending a cent in traditional advertising or marketing dollars. Www.ascd.org/ASCD/pdf/journals/policypriorities/pp_v17n04_infographic_pdf.pdf. The Importance of Social Media in a Constantly Changing World. In an era where things seem to be changing with every tick of the clock, businesses both large and small have a multitude of mediums where a company can advertise and market their brand to potential consumers. 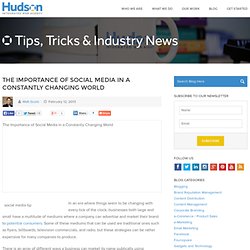 Some of these mediums that can be used are traditional ones such as flyers, billboards, television commercials, and radio; but these strategies can be rather expensive for many companies to produce. Why Social Media Is Far More Important Than You Think. The growth of social media as an influencing factor in our lives is truly breathtaking. 91% of American adults who are online use social media[4]. 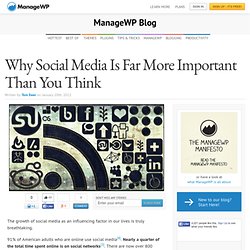 Nearly a quarter of the total time spent online is on social networks[3]. There are now over 800 million Facebook users in the world, with more than 200 million joining in 2011 alone[2]. Nearly 40% of those 800 million log in every single day. It is not just Facebook that’s growing either – Twitter is adding half a million users on a daily basis[1], and there is a new kid on the block that has managed to attract over 90 million users in just over half a year. Why Being Active On Social Media Is Important to Businesses. You know how important a website is to your business. 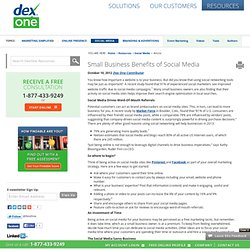 But did you know that using social networking tools may be just as important? A recent study found that 91% of experienced social marketers see improved website traffic due to social media campaigns.1 Many small business owners are also finding that their activity on social media sites helps improve their search engine optimization in local searches. Social Media Drives Word-Of-Mouth Referrals Potential customers can act as brand ambassadors on social media sites. This, in turn, can lead to more business for you. 79% are generating more quality leads.1Nielsen estimates that social media and blogs reach 80% of all active US Internet users, of which there are 245 million.

“Just being online is not enough to leverage digital channels to drive business imperatives,” says Kathy Bloomgarden, Ruder Finn co-CEO. So where to begin? 3 Simple Reasons Why Social Media is Important. Social media has proven to be an important and integral part of modern day business operations, and cannot be ignored. There are a number of reasons as to why social media should be included as a part of any business campaign and for any business to be successful in these modern times, there needs to be room for the inclusion of social media.

Here are just some of the reasons as to Reason #1. Why is social networking important? - Write.com Forum. 4 Reasons Why Social Media Is More Important Than Ever. Social media was once an iffy area to venture into for many business. 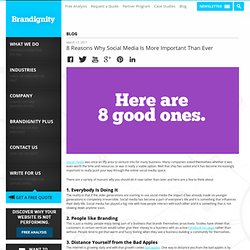 Many companies asked themselves whether it was even worth the time and resources or was it really a viable option. Well that ship has sailed and it has become increasingly important to really push your way through the online social media space. There are a variety of reasons why you should do it now rather than later and here are a few to think about: 1. Everybody Is Doing It The reality is that if the older generations are starting to use social media the impact it has already made on younger generations is completely irreversible. 2. This is just a reality; people enjoy being part of a business that brands themselves proactively. 3. The internet is growing daily and with that growth comes bad apples. 4.

Everything online has really surrounded the concept of building a community or a group of cheerleaders that can vouch for your business. 5.