Decomposers. What is a decomposer? 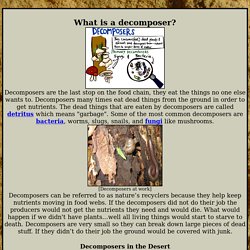 Decomposers are the last stop on the food chain, they eat the things no one else wants to. Decomposers many times eat dead things from the ground in order to get nutrients. Decomposers. Fabulous Fungi Fungi like mushrooms, mildew, mold and toadstools are not plants. 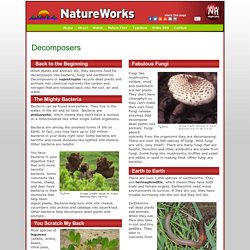 They don't have chlorophyll so they can't make their own food. - Our Earth - Composting with worms. It's simple. 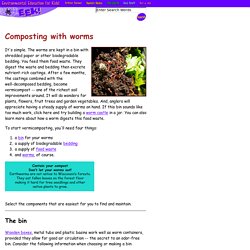 The worms are kept in a bin with shredded paper or other biodegradable bedding. You feed them food waste. They digest the waste and bedding then excrete nutrient-rich castings. After a few months, the castings combined with the well-decomposed bedding, become vermicompost -- one of the richest soil improvements around. It will do wonders for plants, flowers, fruit trees and garden vegetables. What Is Decomposition? Whan a plant, animal, or insect dies, that plant, animal, or insect is broken into tiny pieces and those pieces become part of the soil. 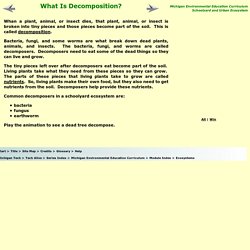 This is called decomposition. Bacteria, fungi, and some worms are what break down dead plants, animals, and insects. The bacteria, fungi, and worms are called decomposers. Decomposers need to eat some of the dead things so they can live and grow. The tiny pieces left over after decomposers eat become part of the soil. 6 animals that recycle in their everyday lives. How and What Does Nature Recycle Naturally? Food Webs For Kids. Earthworms pull leaf litter and other rotting remains from the surface of the soil into their burrows. 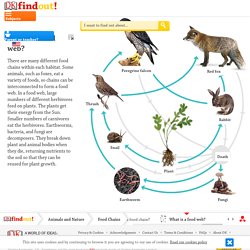 They break down the remains as they feed on them. When living things die, they stop taking energy from the food chain. But their dead bodies can provide energy for other creatures and nutrients that help plants to grow. Plants get their energy directly from the Sun, so they are often at the bottom of the chains that form a food web. Food Web: Facts (Science Trek: Idaho Public Television) “Time for dinner” is a welcome sound to just about everyone. 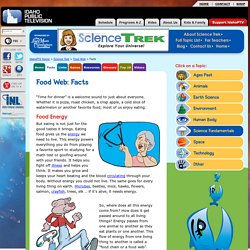 Whether it is pizza, roast chicken, a crisp apple, a cold slice of watermelon or another favorite food, most of us enjoy eating. Food Energy But eating is not just for the good tastes it brings. Eating food gives us the energy we need to live. Science for Kids: Food Chain and Web. Every living plant and animal must have energy to survive. 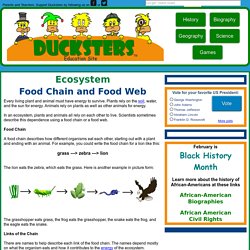 Plants rely on the soil, water, and the sun for energy. Animals rely on plants as well as other animals for energy. In an ecosystem, plants and animals all rely on each other to live. Scientists sometimes describe this dependence using a food chain or a food web. Food Chain.