Kant - groundwork for the metaphysics of morals with essays. Part_1_chapter3.pdf. Gurindji Journey. Gurindji Journey. Places of the Heart: The Psychogeography of Everyday Life: Colin Ellard: 9781942658009: Amazon.com: Books. Psychogeography (Pocket Essential series): Merlin Coverley: 9781842433478: Amazon.com: Books. Social constructionism and social inequality. I sometimes wonder,If I were to propose redefining sociology as “thestudy of social inequality,”would I be far off the mark? 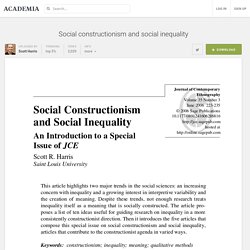 Consider the confer-ence themes of the 1998,2000,and 2002 annual meetings of the AmericanSociological Association:“Inequality and Social Policy”; “Oppression,Domination,and Liberation”; “Allocation Processes and Ascription.”There is,however,another major trend in sociology:increasing attentionto meaning and interpretation. Qualitative,interpretive approaches to study-ing social life have proliferated. Symbolic interactionism,ethnomethodol-ogy,phenomenology,frame analysis,narrative analysis,discourse analysis,cognitive sociology,cultural studies,postmodernism—these and other inter-pretive perspectives have gained popularity and some acceptance. Meaning is not inherent and that meaning is central to social life have captured the imaginations of sociolo-gists and social scientists of many stripes. Scholars increasingly recognizethat human beings live in The self: Consequences of Pragmatism: Essays, 1972-1980 - Richard Rorty. User Review - Flag as inappropriate Partly informative, partly annoying. 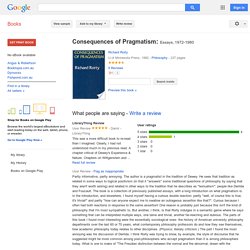 The author is a pragmatist in the tradition of Dewey. He sees that tradition as related in some ways to logical positivism (in that it "answers" some traditional questions of philosophy by saying that they aren't worth asking) and related in other ways to the tradition that he describes as "textualism": people like Derrida and Foucault. The book is a collection of previously published essays, with a long introduction on what pragmatism is. Vladimir Propp. Biography[edit] Vladimir Propp was born on April 17, 1895 in St. 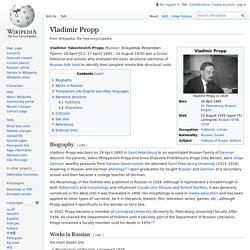 Petersburg to a German family. He attended St. Petersburg University (1913–1918) majoring in Russian and German philology.[1] Upon graduation he taught Russian and German at a secondary school and then became a college teacher of German. In 1932, Propp became a member of Leningrad University (formerly St. Works in Russian language[edit] His main books are: Morphology of the tale, Leningrad 1928Historical Roots of the wonder tale , Leningrad 1946Russian Epic Song , Leningrad 1955 - 1958Popular Lyric Songs , Leningrad 1961Russian Agrarian Feasts, Leningrad 1963 He also published some articles, the most important are: The Magical Tree on the tombWonderful ChildbirthRitual Laughter in folkloreOedipus in the light of folklore First printed in specialized reviews, they were republished in Folklore and Reality, Leningrad 1976 Two books were published post mortem: Translations into English and other languages[edit] Functions[edit]

The Government's 'allegiance' law sends us back to the Middle Ages - The Drum. Opinion Updated By inserting the requirement for "allegiance to Australia" into the proposed citizenship laws, the Government is invoking an idea that hasn't really existed since medieval times, writes Michael Bradley. 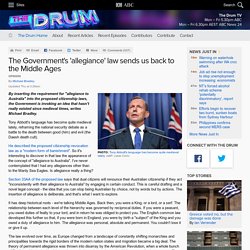 Tony Abbott's language has become quite medieval lately, reframing the national security debate as a battle to the death between good (him) and evil (the Daesh death cult). He described the proposed citizenship revocation law as a "modern form of banishment". So it's interesting to discover in that law the appearance of the concept of "allegiance to Australia". Section 33AA of the proposed law says that dual citizens will renounce their Australian citizenship if they act "inconsistently with their allegiance to Australia" by engaging in certain conduct. It has deep historical roots - we're talking Middle Ages. When Australia came into being in 1901, we were all still British subjects. I thought it was simply my birth right. What's happening here is very subtle.

Citz-booklet-full-ver. Philosophy-A-Very-Short-Introduction.pdf. Discourse: A Sociological Definition. Discourse refers to how we think and communicate about people, things, the social organization of society, and the relationships among and between all three. 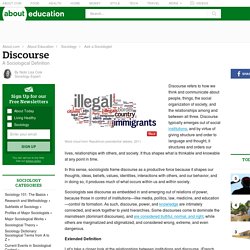 Discourse typically emerges out of social institutions, and by virtue of giving structure and order to language and thought, it structures and orders our lives, relationships with others, and society. It thus shapes what is thinkable and knowable at any point in time. Service Unavaliable.