A Brief Historical Overview – The Big Game Hunter. By Bruce Whitehill Toy Shop, October 1997 Once upon a time in a land far, far away… Games have been used for education and recreation by children and adults for thousands of years. 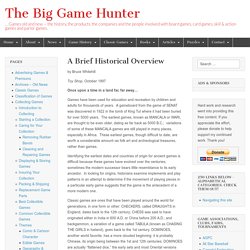 A gameboard from the game of SENAT was discovered in 1922 in the tomb of King Tut where it had been buried for over 5000 years. The earliest games, known as MANCALA or WARI, are thought to be even older, dating as far back as 5000 B.C.; variations of some of these MANCALA games are still played in many places, especially in Africa. Identifying the earliest dates and countries of origin for ancient games is difficult because these games have evolved over the centuries; sometimes the modern successor bears little resemblance to its early ancestor.

European favorites that at various times had a following in the United States include FOX AND GEESE, which had its origin around the year 1300, possibly in Iceland, and the GAME OF GOOSE which originated in Europe around 1500. Modern Classics. No Dice. Game History Timeline. Discover more key moments in American board and card game history from The Strong’s collections by visiting the museum’s online exhibits. 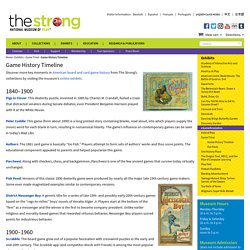 Pigs in Clover: This dexterity puzzle, invented in 1889 by Charles M. Crandall, fueled a craze that distracted senators during Senate debates; even President Benjamin Harrison played with it at the White House. Peter Coddle: This game (from about 1890) is a long printed story containing blanks, read aloud, into which players supply the (noun) word for each blank in turn, resulting in nonsensical hilarity. The Full History of Board Games – The Startup – Medium. The Royal Game of Ur 2600 BC Within the past few years board games have gone through an explosion of growth. 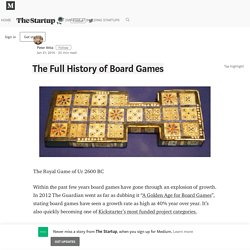 In 2012 The Guardian went as far as dubbing it “A Golden Age for Board Games”, stating board games have seen a growth rate as high as 40% year over year. It’s also quickly becoming one of Kickstarter’s most funded project categories. The budding interest has gone as far as inspiring Wil Wheaton and Felicia Day to start a popular Youtube series, called Table Top. This series pits internet celebrities against each other and garners several hundred thousand views per video. So, how did something so archaic become so popular? Who invented Board Games? - History of Board Games. April 2016 - People were playing board games earlier than we have any records. 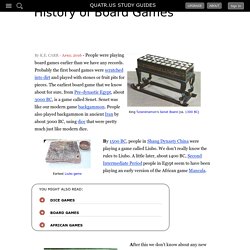 Probably the first board games were scratched into dirt and played with stones or fruit pits for pieces. The earliest board game that we know about for sure, from Pre-dynastic Egypt, about 3000 BC, is a game called Senet. Senet was like our modern game backgammon. People also played backgammon in ancient Iran by about 3000 BC, using dice that were pretty much just like modern dice. By 1500 BC, people in Shang Dynasty China were playing a game called Liubo. Games. That Time America Outlawed Pinball It may be hard to believe, but not too long ago major American cities banned pinball out of fear of the arcade game’s effect on crime, juvenile delinquency and morality. 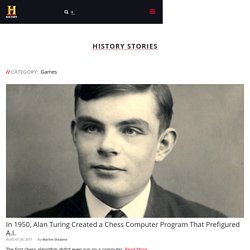 Read More How Johnny Carson Saved Twister Find out how a late-night television show rescued the game from history’s scrap heap and made it a pop culture sensation. The History Of Gaming: An Evolving Community. Riad Chikhani is co-founder and CEO of gaming social network Gamurs. 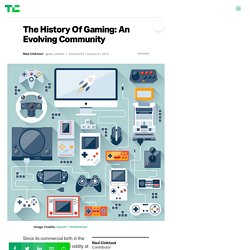 Since its commercial birth in the 1950s as a technological oddity at a science fair, gaming has blossomed into one of the most profitable entertainment industries in the world. The mobile technology boom in recent years has revolutionized the industry and opened the doors to a new generation of gamers. Indeed, gaming has become so integrated with modern popular culture that now even grandmas know what Angry Birds is, and more than 42 percent of Americans are gamers and four out of five U.S. households have a console. The Early Years The first recognized example of a game machine was unveiled by Dr.

However, the first game system designed for commercial home use did not emerge until nearly three decades later, when Ralph Baer and his team released his prototype, the “Brown Box,” in 1967. According to the National Museum of American History, Baer recalled, “The minute we played ping-pong, we knew we had a product. Fun for Everyone: The Evolving History of Board Games. The delightful hobby of playing games isn't a modern invention. 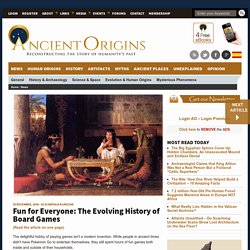 While people in ancient times didn't have Pokemon Go to entertain themselves, they still spent hours of fun games both inside and outside of their households. It is unknown who the innovators were who first started to play games. MacGregor Historic Games > Macgregor Historic Games Store. Video Game History Foundation. A Brief History Of Video Games. More than 30 years after Atari popularized the interchangeable game cartridge, gaming-software sales top $33 billion annually, with the global industry value greater than $100 billion. 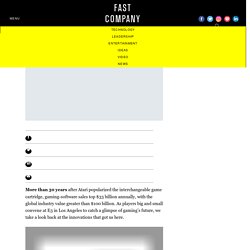 As players big and small convene at E3 in Los Angeles to catch a glimpse of gaming’s future, we take a look back at the innovations that got us here. Infographic: Electronic Entertainment Expo The Magnavox Odyssey — the world’s first home-gaming console — invades living rooms, selling 300,000 units. The Atari 2600 brings variety to the home with its game cartridges. Fan favorites like Space Invaders push Atari sales past 25 million units over its lifetime. Japan is introduced to the Family Computer, or the Nintendo Entertainment System.