Games: Video Games: Adventure: Text Adventures. List of graphic adventure games. Index: if-archive. Index: if-archive You feel somewhat disoriented as you pass through... This is the Interactive Fiction Archive at www.ifarchive.org. You may be interested in... The list of all directories is a table of contents of the entire Archive, in order. The list of files, sorted by date is a (long) index of every file. Or, go delving into the hierarchical tree shown here. Games by Infocom. Infocom. Infocom was founded on June 22, 1979 by MIT staff and students led by Dave Lebling, Marc Blank, Albert Vezza, and Joel Berez and lasted as an independent company until 1986 when it was bought by Activision. 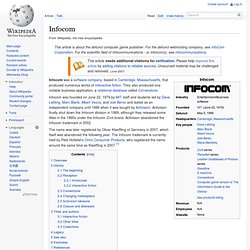 Interactive-fiction.de. The Infocom Gallery - a repository of high-quality scans of classic Infocom packages and manuals. A couple of years ago, two little collections known as The Lost Treasures of Infocom, parts 1 and 2 were published. Everything Infocom released in just two collections -- seemed too good to be true. And it was, in a number of ways. First, the collection was incomplete -- Leather Goddesses was not included. Second, no feelies -- no plastic palm, no AMFV pen, no Wishbringer stone, no microscopic space fleet... Then there were the manuals. This used to be the paragraph where we asked people to not promote our site, for fear of being shut down by Activision.

Just to clarify: It is not the purpose of this project to damage Activision's Infocom franchise (there doesn't seem to be much left of it lately). Once a work of art has been abandoned, and is in danger of vanishing into oblivion, salvage rights apply. David and Julian. Interactive fiction. As a commercial product, interactive fiction reached its peak in popularity from 1979 to 1986,[3] as a dominant software product marketed for home computers. Due to their text-only nature, they sidestepped the problem of writing for widely divergent graphics architectures. This meant that interactive fiction games were easily ported across all the popular platforms, even those such as CP/M (not known for gaming or strong graphics capabilities).

Today, a steady stream of new works is produced by an online interactive fiction community, using freely available development systems. The term can also be used to refer to literary works that are not read in a linear fashion, known as gamebooks, where the reader is instead given choices at different points in the text; these decisions determine the flow and outcome of the story. Interactive fiction is sometimes used as a synonym for visual novel, a popular style of PC game in Japan.[5] Medium[edit] Writing style[edit] pull lever History[edit] GET LAMP: The Text Adventure Documentary. XYZZYnews Home Page. Box of Rats Blog › The Art of Code, IF and Games. The 17th Annual Interactive Fiction Competition. SPAG - Society for the Promotion of Adventure Games. Interactive fiction games: More than retro fun. (Read on for the article, or you can jump to a Quick and Dirty Start for the Impatient.) “You are standing in an open field west of a white house, with a boarded front door.” Those words begin one of the best known text adventure games of all time: Zork.

For those who haven’t heard of it, I'm talking about the wildly popular game that saw popular release around 1982, far before the proliferation of home PCs. To put this era in perspective, I'm talking about when Michael Jackson sold 20 million copies of “Thriller”, “Late Night with David Letterman” first aired, and filming began on “Return of the Jedi”. Text adventures, also called “interactive fiction” or “IF”, are video games you play (get ready for this) without any graphics or sound. Most IF games consist of nothing more than reading and typing. Granted, to play and appreciate these games you’ve got to be more than just an arcade-shoot-em-up player. A great bonus is that the games are designed to run on multiple platforms. Home - The Inventory Adventure Games. Covers of the Infocom boxes. Infocom Fact Sheet. The Interactive Fiction Database - IF and Text Adventures.

The Elder Scrolls V: Skyrim - Xbox 360. AGA Go Software. Available for Purchase The following are programs you can purchase on the internet from a vendor of go products, or in many cases directly from the author. Crazy Stone: Currently one of the strongest go playing engines. Available for PC, iPhone and iPad.Ego: by Bruce Wilcox. It plays with nine different personalities.FunGo: Includes a tutorial and 200 life and death problems. Play against the computer, or against a human opponent over the Internet.Go++: Author Michael Reiss claims his program is "the strongest in the world"Many Faces of Go: Purchase David Fotland's award-winning program.

Available for Free Download The following are programs you can download for free. These programs do not play, but they are designed to show you things that may improve your play. The following programs enable you to record games for later review. Windows iOS and Android [Tsumego/Tesuji apps for iPad, iPhone & Android devices] ( Windows CE Macintosh Palm OS Java. 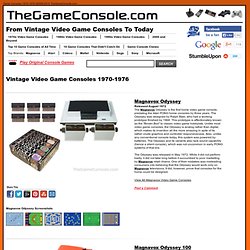 Not a very popular or entertaining system, it was nonetheless important at the time for having a number of original features which were copied by later more successful systems. Fairchild released twenty-six different cartridges for the system, with up to four games being on each cartridge. The original web archive of game manuals. The Art & Business of Making Games.