Know How: How To Introduce A Character - The Beat. By David Seidman Hi. 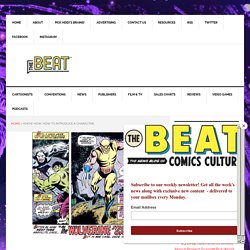 This is the first in a series of articles with practical advice on how to do things in comics. What gives me the heft to throw around advice? I’ve written comics for Bongo and Marvel, edited comics for Disney, marketed and publicized comics for NBM, Papercutz, and other companies, and written about comics for the Los Angeles Times and elsewhere. I even married comics; my wife, Lea Hernandez, has written and drawn comics and graphic novels for Image, Marvel and other companies, and currently draws Teen Titans Go! Oh, and I’ve already written two how-to pieces for The Beat, on comic-con panel discussions and publicizing con events.

So let’s get to work. You can introduce a character in lots of ways, but one that virtually always works is showing the character doing something that defines him or her. The Godfather begins during the wedding of the Godfather’s daughter — but he’s not at the wedding. And so it goes. Here’s how this approach applies to comics. Like this: The sorting hat song. Lets face it. Using Descriptive Words. In The Prince and the Pauper, Mark Twain paints a word picture of King Henry VIII using descriptive language: Before him, at a little distance, reclined a very large and very fat man, with a wide, pulpy face, and a stern expression. His large head was very grey; and his whiskers, which he wore only around his face, like a frame, were grey also. His clothing was of rich stuff, but old, and slightly frayed in places. One of his swollen legs had a pillow under it, and was wrapped in bandages. This stern-countenanced invalid was the dread Henry VIII.

And in The Bronze Bow [aff. link], Elizabeth George Speare describes a young Roman soldier: When he straightened again, the Roman was pulling off his helmet, revealing crisp fair hair. Using Descriptive Writing Tools Can your high schoolers describe a person using vivid vocabulary like the above examples? Fantasy & Fairy Tales StoryBuilders Printable Writing Prompt Cards This offer is free for subscribers and is governed by this privacy policy. Eyes. 15 games for the language of describing people. 1. 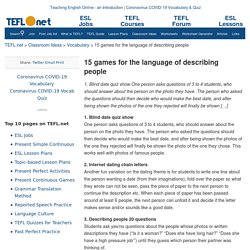 The person who asked the questions should then decide who would make the best date, and after being shown the photos of the one they rejected will finally be shown the photo of the one they chose. 2. 3. 4. 5. Get sorted into your Hogwarts house with this Potter Book Night sorting hat quiz! - Fun Kids - the UK's children's radio station. Google Image Result for. Personality traits wordsearch fun activities games games 8925. Physical appearance personality activities promoting classroom dynamics group form 93999. Describing people and personalities. The first in our series of upper-intermediate ESL lesson plans focuses on the adjectives that we use when describing people and their personality traits. 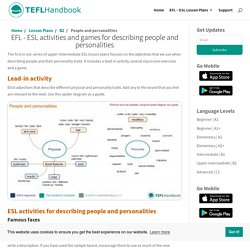 It includes a lead-in activity, several classroom exercises and a game. Lead-in activity Elicit adjectives that describe different physical and personality traits. Add any to the board that you feel are relevant to the level. Use this spider diagram as a guide. ESL activities for describing people and personalities Famous faces Students will work in pairs to create a detailed description of a well-known celebrity. Start by dividing the class into pairs. Who am I? 10 Fun Activities For Adjectives Of Personality. Stimulating activities to teach and practise the difficult but fascinating topic of words that describe people’s character Adjectives of personality can be incredibly difficult to teach and learn. 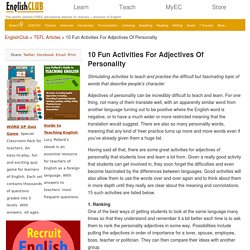 For one thing, not many of them translate well, with an apparently similar word from another language turning out to be positive where the English word is negative, or to have a much wider or more restricted meaning that the translation would suggest. There are also so many personality words, meaning that any kind of freer practice turns up more and more words even if you’ve already given them a huge list. Having said all that, there are some great activities for adjectives of personality that students love and learn a lot from. Given a really good activity that students can get involved in, they soon forget the difficulties and even become fascinated by the differences between languages. 1. 2. 3. 4.