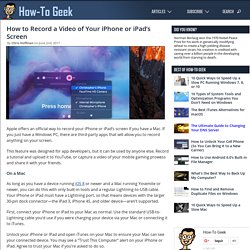 If you just have a Windows PC, there are third-party apps that will allow you to record anything on your screen. This feature was designed for app developers, but it can be used by anyone else. Record a tutorial and upload it to YouTube, or capture a video of your mobile gaming prowess and share it with your friends. On a Mac. 5 Classroom Ideas for How-To Videos. One of my most popular posts last year was a list of tools teachers and students can use to create how-to videos. 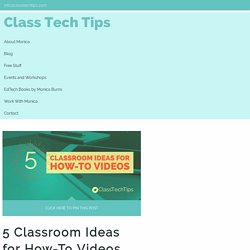 It’s been lots of fun to see which ones teachers are most excited about and I often get a chance to lead hands-on workshops taking teachers through these tools in person. There are plenty of reasons you might decide to incorporate a how-to writing activity in your classroom. This type of reading and writing activity is extremely relevant. 12 structures to keep kids focused when using the internet in class - The Cornerstone For Teachers.

One of the most common problems teachers face when integrating technology is keeping kids focused and accountable. 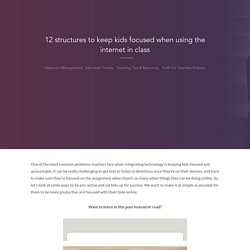 Edsurge. How Teachers Can Use Quicktime Video Screenshots to Help Students Learn. Tutorial videos are a great way for teachers to provide extra learning resources for students. 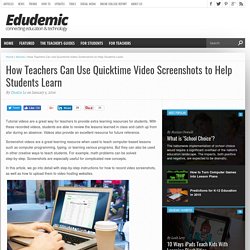 With these recorded videos, students are able to review the lessons learned in class and catch up from afar during an absence. Videos also provide an excellent resource for future reference. Screenshot videos are a great learning resource when used to teach computer-based lessons such as computer programming, typing, or learning various programs. Children need conversation, not iPads, in school. I placed an iPad into the outstretched hands of each of my third-grade students, and a reverent, tech-induced hush descended on our classroom. 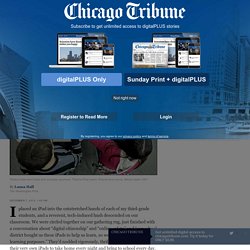 We were circled together on our gathering rug, just finished with a conversation about “digital citizenship” and “online safety” and “our school district bought us these iPads to help us learn, so we are using them for learning purposes.” They'd nodded vigorously, thrilled by the thought of their very own iPads to take home every night and bring to school every day.

Some of them had never touched a tablet before, and I watched them cradle the sleek devices in their arms. They flashed their gap-toothed grins — not at each other but at their shining screens. That was the first of many moments when I wished I could send the iPads back. Guide to Creating and Inventing with Technology in the Classroom. 50 Tools to Get the Most Out of Dropbox. 50 Tools to Get the Most Out of Dropbox Dropbox is one of the world’s favorite cloud-based, file-sharing solutions. 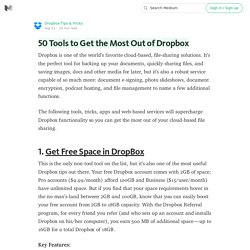 It’s the perfect tool for backing up your documents, quickly sharing files, and saving images, docs and other media for later, but it’s also a robust service capable of so much more: document e-signing, photo slideshows, document encryption, podcast hosting, and file management to name a few additional functions. The following tools, tricks, apps and web-based services will supercharge Dropbox functionality so you can get the most out of your cloud-based file sharing. 1.

Get Free Space in DropBox This is the only non-tool tool on the list, but it’s also one of the most useful Dropbox tips out there. Key Features: Earn 500MB per referralRefer via link, Facebook, Twitter, and other methodsAdd up to 16GB to your free Dropbox account, for total storage of 18GB. Tips and Techniques. The Twitteraholic’s Ultimate Guide to tweets, hashtags, and all things Twitter. 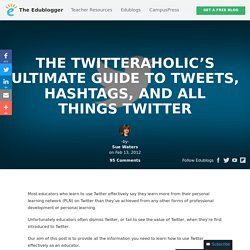 Unfortunately educators often dismiss Twitter, or fail to see the value of Twitter, when they’re first introduced to Twitter. Our aim of this post is to provide all the information you need to learn how to use Twitter effectively as an educator. We regularly update this post with new information. This post was last updated June, 2014. 8 little-known video resources popular with teachers. OpenEd compiled this list of resources after reviewing teacher video use The use of video in education is growing by leaps and bounds. 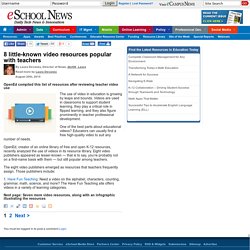 Videos are used in classrooms to support student learning, they play a critical role in flipped learning, and they also figure prominently in teacher professional development. One of the best parts about educational videos? New virus created that can completely wreck Apple computers. Two security consultants have created a new computer worm, the Thunderstrike 2, that attacks the core hardware of a Mac computer once unleashed. 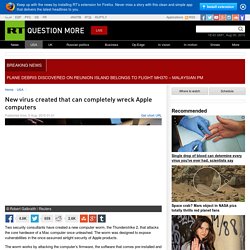 The worm was designed to expose vulnerabilities in the once-assumed airtight security of Apple products. The worm works by attacking the computer’s firmware, the software that comes pre-installed and loads the operating system. Firmware provides control, monitoring and data manipulation in engineering products or systems. The cybersecurity research work on the worm was carried out by Xeno Kovah, owner of LegbaCore, and Trammell Hudson, a security engineer with Two Sigma Investments.

According to the researchers, an attack can occur via a phishing email (an email sent from a fake “trusted institution” like a bank) or a malicious website containing the worm. Here Is How to Use iPad As A Document Camera in Class. July 15, 2015 An interesting way to use iPad with students in class is through turning it into a document camera. 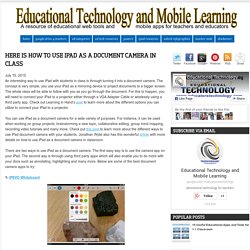 The concept is very simple, you use your iPad as a mirroring device to project documents to a bigger screen. The whole class will be able to follow with you as you go through the document. Evaluating Technology? Here's What To Look For... In my former life as a Director of Instructional Technology I worked with school leaders to make the best choices when it came to technology.

We would spend great deals of time looking at funds and how they could best be used to make an impact on student learning. I believe many districts do that. However, often, when the hardware is installed and the software has been trained on that is where conversations end and responsibilities shift. The problem with that approach is that how do we know that what we purchase is actually being used appropriately or even being used for that matter? I began looking at technology after the purchase. Mr. B's Blog: Teching and Teaching. "Technology won't replace teachers, but teachers who use technology will probably replace teachers who don't" I am a technology addict. As I type this on my Chromebook, my iPhone, iPad, and Toshiba laptop are not too far from my fingertips. I have prbably spent more money on personal technology than I have spent on clothing. I like to be able manipulate and explore things; technology allows me to do that on a grander scale. More so than my own enjoyment of technology, I love to pair this with another of my passions: teaching.

(You do this by simply hitting the space bar when you have a file or files highlighted in the Finder.) Even cooler? Show your Home Directory in the Sidebar Your Home folder contains all your stuff, including documents, photos and music. To make the Home folder show up, simply choose Preferences from the Finder menu (or hit Command-comma when you’re in the Finder). Show the Status and Path bars Both are useful, and both can be enabled in the View menu.

10 Questions to Ask When Planning Tech Infused Units. Here on Edtech at About.com, we've put together a list of potential technology-related questions that you may want to ask yourself when planning for instruction and designing curriculum. Many of these ideas are inspired by existing frameworks and philosophies focused on tech integration. Also, we've listed several tools and websites that may help you explore these questions; these lists are not exhaustive but are selected to serve as starting points. Most tools listed are free, some have educator pricing available. We hope that these resources will help you get started with your explorations. For further inspiration, check out popular and useful tech integration frameworks such as Dr. Choosito! - Home. A Nicer Way To Share YouTube™ Videos! How to Create Custom QR Codes. Google's Classroom app lets students submit homework on their phones.

InstaGrok: An Education Search Engine for Students. After weeks of poring over reviews and testing the app in my classroom, I can say with confidence that instaGrok offers the best research engine experience for education of any app for tablets running iOS or Android. The instaGrok app is more classroom-friendly than its competitors, and its visual presentation of results is unparalleled. Caution: Don't miss out on the best iOS apps of 2014. The word “app” has always described Apple’s executable programs, but it wasn’t until the App Store appeared in 2008 that the term really took hold as a way to describe the little programs that help make our smartphones not just smart, but also useful and totally fun.

At this point, “There’s an app for that” has become a phrase you’ll hear pretty much everywhere. Tech for Teachers. How to Stream Google Hangouts On Air to Twitter and Facebook. CER. Educational Technology. 7 Ways to Use Technology With Purpose. Edudemic - Education Technology Tips For Students And Teachers.