Create an Unforgettable Shopping Experience by Hacking Customer Emotions. What Do Schools Need? Collaboration and Principals Who Lead It  John Hattie is back -- and once again he is marshaling the evidence needed to improve schools. 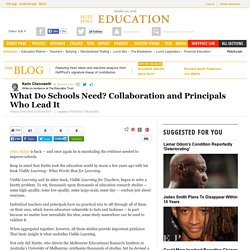 Keep in mind that Hattie took the education world by storm a few years ago with his book Visible Learning: What Works Best for Learning. Visible Learning and its sister book, Visible Learning for Teachers, began to solve a knotty problem. To wit, thousands upon thousands of education research studies -- some high-quality, some low-quality, some large-scale, some tiny -- confuse just about everyone. Individual teachers and principals have no practical way to sift through all of them on their own, which leaves educators vulnerable to fads and fashions -- in part because no matter how unrealistic the idea, some study somewhere can be used to validate it. When aggregated together, however, all those studies provide important guidance. As it turns out, pretty much any policy, program, or practice can have some positive effect for students. And what is the one thing that has the most effect? Tomorrow's Learning Today: 7 Shifts To Create A Classroom Of The Future.

Tomorrow’s Learning Today: 7 Shifts To Create A Classroom Of The Future by Terry Heick For professional development around this idea or others you read about on TeachThought, contact us. 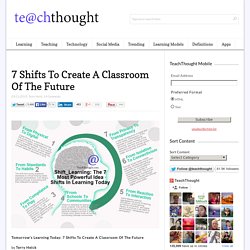 Let’s take a look at the nebulous idea of the “classroom of the future.” 5 Rarely Considered Obstacles To 21st Century Education - Forbes. How a Bigger Purpose Can Motivate Students to Learn. A few years ago, psychologist David Yeager and his colleagues noticed something interesting while interviewing high school students in the San Francisco Bay Area about their hopes, dreams and life goals. 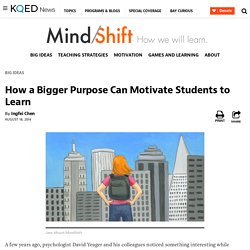 It was no surprise that students often said that making money, attaining fame or pursuing a career that they enjoyed were important to them. But many of them also spoke of additionally wanting to make a positive impact on their community or society — such as by becoming a doctor to take care of people, or a pastor who “makes a difference.” What’s more, the teens with these “pro-social” types of goals tended to rate their schoolwork as more personally meaningful. Given this information, Yeager and his colleagues wanted to know: could such a bigger sense of purpose that looks beyond one’s own self-interests be a real and significant inspiration for learning?

They believe the answer is yes. Welcome to Forbes. 3 Difficult-To-Swallow Truths About The History Of Education And The Future Of Technology. This researcher asked kids what's wrong with U.S. schools. Here are their ideas. How To Design The Googleplex Of Schools. When the city of Alexandria, Minnesota, asked community members what they wanted in their new high school to be like, they replied, "like the Google campus. 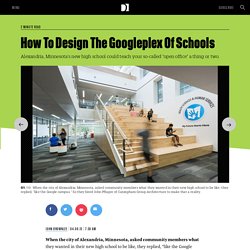 " So they hired John Pfluger of Cuningham Group Architecture to make that a reality. Something that might not be the same size, or even necessarily have the exact design considerations, but that represents the same sense of possibility—the feeling of being adaptable to the future, whatever might come of it. The result is a state-of-the-art facility for more than 1,400 students where the word "classroom" is verboten, and where an hour in algebra class might be indiscernible from kicking back in the quad. The new $73 million Alexandria Area High School houses students from grades nine to 12. In terms of square footage, the new facility is average in size—about 200 square feet per student—but "it plays bigger than it is," says Pfluger, because of the layout. WP_ProfLearningCrisis.pdf. Welcome to Inc.com. The Language of School Design: Design Patterns for 21st Century Schools - Prakash Nair, Randall Fielding, Jeffery A. Lackney.

43834191. Liberated Spaces: Purposeful School Design Says Goodbye to Cells and Bells. After a 30-year career as a design consultant, Ron Christie joined Regina Public Schools in 2004 as the manager of planning and maintenance. 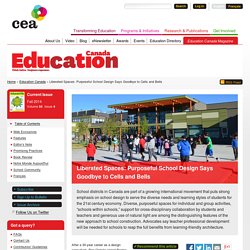 His first impressions of the system’s schools took him back in time. “As soon as you walk in the door you think my god, nothing has changed since I went to elementary school and that was a long time ago,” says Mr. Christie, now general manager of educational facilities for the district. Since his first impressions, Regina and other school districts in Canada have joined a growing international movement on school design for 21st century learners. Douglas Park School Opens in Regina. By Bill Armstrong With 43 elementary schools in its portfolio, the Regina School Division always has renovation and new construction projects on its plate. 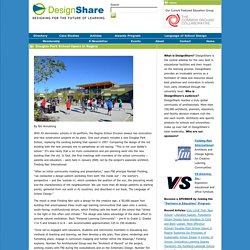 One such project includes a new Douglas Park School, replacing the existing building that opened in 1957. Comparing the design of the old building with the new prompts one to paraphrase an old saying: “This is not your daddy’s school.” It’s also likely that a lot more consultation and pre-planning went into the new building than the old. In fact, the first meetings with members of the school community – parents and educators – were held in January 2009, led by the project’s associate architect, Fielding Nair International. “Once we’ve engaged with educators, students and community members in discussing key methods of teaching and learning, we then develop a site plan, floor plans, renderings and furnishing plans, engage in curriculum mapping and further refine the drawings,” Fielding explains.