Undergraduate Research. Maybe you can picture yourself doing a fantastic job on a research project and some day making a significant contribution to the theory or practice of computer science. 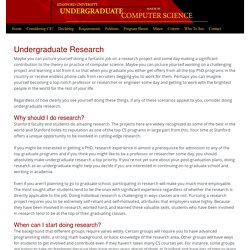 Maybe you can picture yourself working on a challenging project and learning a lot from it so that when you graduate you either get offers from all the top PhD programs in the country or receive endless phone calls from recruiters begging you to work for them. Perhaps you can imagine yourself becoming a top-notch professor or researcher or engineer some day and getting to work with the brightest people in the world for the rest of your life. Regardless of how clearly you see yourself doing these things, if any of these scenarios appeal to you, consider doing undergraduate research. Why should I do research? Stanford faculty and students do amazing research. Even if you aren't planning to go to graduate school, participating in research will make you much more employable. 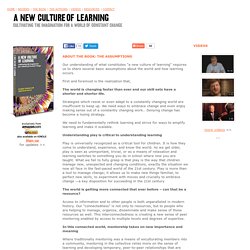 First and foremost is the realization that, The world is changing faster than ever and our skill sets have a shorter and shorter life. A Wow Explanation of What Happens When You Experience a Wow Moment. Flow. 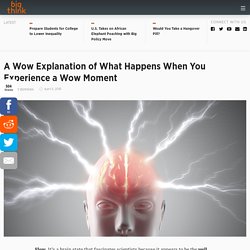 It’s a brain state that fascinates scientists because it appears to be the well from which creativity flows. It was first identified by Mihaly Csikszentmihalyi his 1988 book Flow: The Psychology of Optimal Experience. Psychology Today describes it this way: Action and awareness merge. Our sense of self and our sense of self consciousness completely disappear.

As Steven Kotler says, flow has to do with neuroelectricity. Simplified 10 Hz alpha wave When you’re on the edge of dreaming and sleep, you’re in "theta," where oscillations have slowed down to 3 to 8 Hz. Simplified 5 Hz theta wave But oddly, it’s in-between these two dreamy states where flow—the most engaged state there is—happens. That’s not the only weird thing, either. Simplified 40 Hz gamma wave You can’t stay in a gamma state; it’s just a quick spike. Headline image: ktsdesign. #FlipboardChat Summary: Curating Magazines for Research Studies. 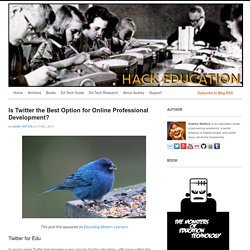 (The math doesn’t really work out on the last claim. By Twitter’s own calculations, less than 1% of tweets are education-related.) Regardless of what percentage of Twitter is comprised by educators, on any given night of the week, there are usually several regularly-scheduled "Twitter chats,” where educators engage in hosted and topical conversations. Twitter can be overwhelming, particularly for new users — some 350,000 tweets are sent every minute — and arguably hashtags do make it easier to follow a particular conversation. Nevertheless, many have argued that Twitter has become one of the most important tools for them to be “connected educators.” Ideally. Top 3 Journal Selectors for PhD Students. IJADE_Article. Kwek-Innovation%20In%20The%20Classroom. TakenOutOfContext.pdf. TPACK.ORG. Literature_Review. There’s No Comparing Male and Female Harassment Online.

A simple and elegant journal for iPhone, iPad, and Mac. OER Commons. The Chronicle of Higher Education. 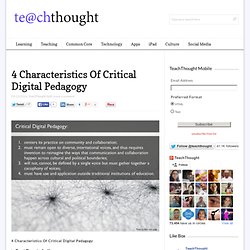 It should be at the core of what the digital humanities is as an academic discipline.” Jesse Stommel is an Assistant Professor of Digital Humanities at University of Wisconsin-Madison, and this idea has a lot to it. In this idea, Stommel shifts the practice of pedagogy as a vehicle for “teaching” to something more whole–considering the humanities not as a school of thought or academic genre, but rather a reason for being. Stommel offers four characteristics of critical digital pedagogy. 1. 2. 3. 4. The presentation is mostly macro thinking of what education can be, quoting from Freire, Dewey, and even Emily Dickinson to make the case for what’s possible in a modern–digital and connected–learning environment. 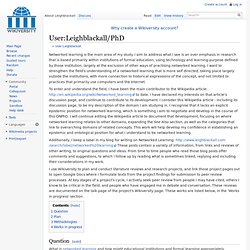 I aim to address what I see is an over emphasis in research that is based primarily within institutions of formal education, using technology and learning-purpose defined by those institution, largely at the exclusion of other ways of practising networked learning. I want to strengthen the field's understanding of a networked learning that is more self directed, taking place largely outside the institutions, with more connection to historical expressions of the concept, and not limited to practices that primarily use computers and the Internet.

To enter and understand the field, I have been the main contributor to the Wikipedia article: to date. I have declared my interests on that article's discussion page, and continue to contribute to its development. I consider this Wikipedia article - including its discussion page, to be my description of the domain I am studying in. Question[edit] Plan[edit] Methodologies[edit] Works in progress[edit]