CHINA'S FUTURE. WITHIN Asia, it is Chinese activity, not Chinese inactivity, that has people worried, and their concern is understandable. 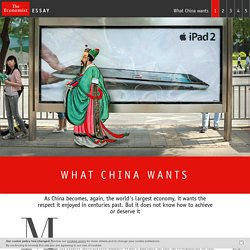 Perhaps most provocative is China’s devotion to the “nine-dash line”, an ill-defined swish of the pen around the South China Sea. Within this perimeter, China claims all the dry land and, it appears, all the water and seabed too; by way of contrast, the rules of the United Nations Convention on the Law of the Sea (UNCLOS) would tend to see quite a lot of those things as subject to claims from other countries. Speaking in June at the Shangri-La Dialogue, an annual regional-security shindig in Singapore, Wang Guanzhong, a Chinese general, made it clear that although China respected UNCLOS, the convention could not apply retroactively: the nine-dash line was instituted in the 1940s and the islands of the South China Sea have been Chinese for 2,000 years. 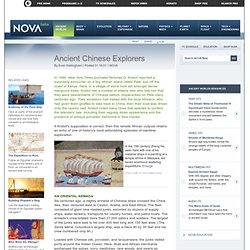 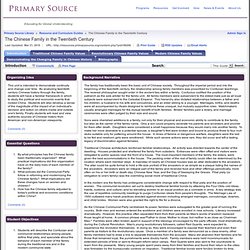 Throughout the imperial period and into the beginning of the twentieth century, the relationship among family members was proscribed by Confucian teachings. Home - Women's Roles in China: Changes Over Time. Women's roles, responsibilities and expectations have changed in dramatic ways as Chinese society has transformed throughout different political eras. 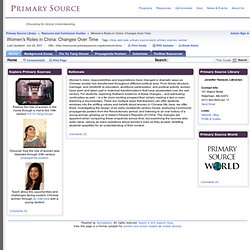 From family structure, marriage, and childbirth to education, workforce participation, and political activity, women have seen and taken part in historical transformations that have accelerated over the last century. For students, exploring firsthand evidence of these changes – and witnessing continuities as well – is a far more exciting prospect than simply reading a text or even watching a documentary. There are multiple ways that teachers can offer students windows into the shifting values and beliefs about women in Chinese life; here, we offer three: investigating the design of an early nineteenth-century house; analyzing Communist propaganda posters from the Revolutionary period; and listening to an oral history of a young woman growing up in today's People's Republic of China. China Source - Primary Source. Chinese Cultural Studies. Watch The Full Program Online.

China strains to satisfy growing demand for meat. China’s growing appetite for meat and dairy is driving big changes in everything from farming to food safety. 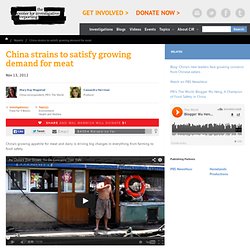 Introduction: We turn now to China, whose growing appetite for meat and dairy is driving big changes in everything from farming to food safety. Our report is part of the series “Food for 9 Billion,” a partnership with the Center for Investigative Reporting, Homelands Productions, PBS NewsHour and American Public Media’s Marketplace. Through a Thwarted Cinematographer's Eye, China's Cultural Revolution. Jmcentarfer.tripod.com/ch28_1.pdf. Examining the Reign of Qin Shi Huang Di. Step 1: Researching Qin Shi Huang Di - Look at the pictures below and read the corresponding Information Handouts to complete the Note-Taking Graphic Organizer on Qin Shi Huang Di [Word Version]. 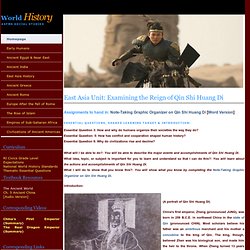 Make sure you direct your note-taking on each Focus Question as they relate to each topic area. Gardens. Garden design was an art in China. 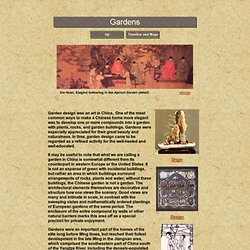 One of the most common ways to make a Chinese home more elegant was to develop one or more compounds into a garden with plants, rocks, and garden buildings. Gardens were especially appreciated for their great beauty and naturalness. In time, garden design came to be regarded as a refined activity for the well-heeled and well-educated. It may be useful to note that what we are calling a garden in China is somewhat different from its counterpart in western Europe or the United States. Www.chinainstitute.cieducationportal.org/cimain/wp-content/themes/chinainstitute/pdfs/education/fromsilktooil_pdf5.pdf.

Www.asia.si.edu/exhibitions/online/chinatimeline/main.swf. The Silk Road Project – Silk Road Encounters. As a symbol of the crossroads between civilizations, peoples, and cultures, the Silk Road offers rich materials for students to explore diverse but interrelated topics on geography, trade, art, music, religion and history. 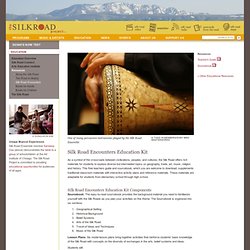 This free teachers guide and sourcebook, which you are welcome to download, supplements traditional classroom materials with interactive activity plans and reference materials. These materials are adaptable for students from elementary school through high school. Sourcebook: The easy-to-read sourcebook provides the background material you need to familiarize yourself with the Silk Roads as you plan your activities on this theme. Silk Road: Spreading Ideas and Innovations.

The Silk Road extending from Southern Europe through Arabia, Somalia, Egypt, Persia, India and Java until it reaches China. 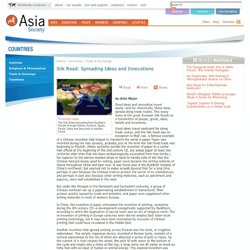 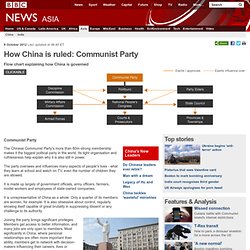